With the help of a low-cost prototype tool, ink-jet printer manufacturer Lexmark was able to successfully test mold fiber cushions as a means of protective packaging. As a result, the company enjoys both cost savings and environmental benefits. 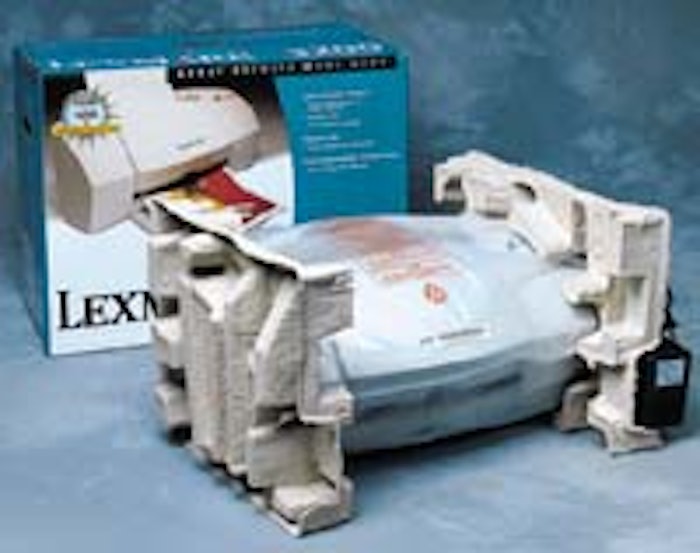 Packaging engineers face the daily challenge of developing environmentally responsible packaging while at the same time controlling costs. When Lexington, KY-based Lexmark Intl. developed a new model of ink-jet printer, the company’s challenge was to find a packaging solution that would pass drop tests, be environmentally sound, and take up considerably less space in order to reduce both shipping and storage costs.

“[We] needed an inexpensive package that would provide adequate protection from the shock and vibration exposures typically found in small-parcel shipping,” says Dennis Traynor, advisory packaging engineer at Lexmark. “The packs had to be easy for packers to use and have the ability to nest and stack efficiently. On top of that, we faced the difficulty of protecting a relatively heavy printer within the confines of a small box, [so we needed] multiple prototypes in order to do numerous drop test sequences.” Fortunately for Lexmark, Moulded Fibre Technology (Georgetown, MA) was able to address the entire list of requirements, using Lexmark’s packaging material of choice: fiber.

“Initially,” says Traynor, “Lexmark knew that a printer of this weight would be a challenge to package effectively in fiber. Therefore, our backup plan was to package the printer in molded [expanded polystyrene]. But we had a strong desire to use fiber, and because the prototyping cost was much lower than we had anticipated, we decided to give MFT the chance to prove that a printer of this weight could be packed in fiber.”

Standard molded pulp production tools are made of aluminum, with a porous, yet sturdy screen laid over the aluminum to draw the slurry pulp mixture through to form the shape the cushion will take. Traditionally, the only way companies could “test drive” a package design using molded fiber was to purchase an expensive production tool. MFT’s proprietary method of developing a prototyping tool, however, substitutes an undisclosed substance for the screen. The tool is capable of producing between 25 and 50 sets of uniform, testable prototype cushions before the screen becomes clogged with pulp.

In about one-third the time it takes to make a production tool, MFT created for Lexmark a prototype tool capable of yielding multiple sample sets of molded fiber cushions. Because the cushions exactly duplicated production articles in terms of material thickness and strength, they yielded accurate drop test information, allowing Lexmark to “sample” MFT’s production tool without investing in the tool itself. That provided numerous benefits for Lexmark.

Although Lexmark would not discuss specific cost savings, MFT says the cost of a prototype tool is approximately 10 to 20% of what a production tool costs. Because the prototype tool was created so quickly, development time for the project was less than anticipated, thus saving development costs.

Using the prototype cushions, drop tests indicated that molded fiber would indeed hold up to the rigors of small-parcel shipping. The cushions were able to pass drop tests with a cushion envelope of no more than 1”, according to MFT senior account manager Alan Bosma. That figure was important because the size of the box being used to package the printer did not allow for much protective packaging inside. Lexmark could have chosen to pack its printer in a larger box, with more room for protective packaging in between, but that would have resulted in higher shipping costs to cover the larger box size. Therefore, the cushions had to be thin, but also highly shock-absorbent.

Once Lexmark was satisfied that the fiber cushions would perform well in the limited space allowed, it purchased the production tool from MFT. During packing, cushions are placed manually on each end of the plastic-bagged ink-jet printers. Additional parts, such as ink cartridges, are manually placed into specially molded areas of the fiber cushions.

Lexmark also learned that fiber is cost competitive against EPS and saves significantly in terms of storage and shipping costs. In Lexmark’s case, the fiber parts nest and stack up 70% more efficiently than EPS. Because molded fiber is made from 100% recycled newspapers, it’s viewed as being environmentally friendly. That yields a reduction in disposal costs in Europe and other areas of the world where packaging is regulated by various environmental packaging directives. “Manufacturers in Europe are required to take back the packaging they use or contract with an agency to recover it for them,” explains Traynor. “Fees are assessed based on material type and weight.”

Another essential element of the project was MFT’s global presence. Because Lexmark’s packaging operations are worldwide, Traynor says it was necessary to find a supplier that was capable of supporting Lexmark globally. “Our goal was to develop all of our packaging at our central engineering location in Lexington, but to deploy packs throughout our global network of manufacturing sites,” he says. “If a source of supply was not available in any given area, we would have had to develop an alternative package. This is not only redundant, but means more development costs.”

Traynor indicates that Lexmark is very satisfied with the way MFT handled his company’s packaging challenge, allowing Lexmark to take the fiber cushions for a test run before committing to long-term production. “The design was successful on its first repetition,” Traynor says, “and Lexmark was extremely pleased to be able to use fiber on this project.”

The PFAS story keeps developing, and isn’t over yet.
Eric Greenberg
Aug 25th, 2020

As a follow up to the open meeting held in June, the ISTA Pharma Committee will host two roundtable discussions in August to discuss in-depth the top two topics of interest from the industry survey.
International Safe Transit Association (ISTA)
Aug 5th, 2020

TEUFELBERGER developed a new strapping solution especially for the printing and packaging industry, as well as the mailing and logistics industry. It is not only easy to operate, easy on the environment but also easy to handle.
TEUFELBERGER Fiber Rope Co.
Jul 1st, 2020