The art and the angles 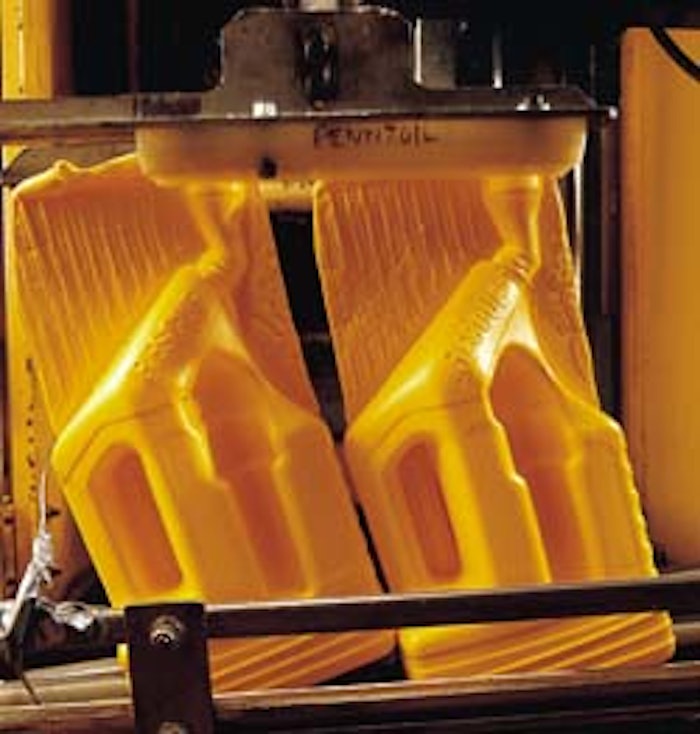 In blow molding, freshly molded Rescue containers are transferred to a trim station where flash is removed and gas is vacuumed o

Once Airopak and Marpac had signed on with Pennzoil, the real fun began.

First, the angles that Pennzoil desired to make the container look like a gas pump nozzle were more severe than had ever been executed in blow molding. “We’d only done one other angled neck bottle with fluorination before,” reports Ken Kallish, vice president and general manager of Airopak and Marpac. “About six months before this project, we produced a bottle with an 11-degree neck angle, and we really thought we had achieved something. And this is the first time at Airopak that we’ve blown a bottle without a calibrated neck.” Neck rings at the top of the blow mold produce the calibrated neck. The Rescue bottle couldn’t be done that way.

Although the neck angle was originally 60°, it was modified to 53° to accommodate the special molds. “The angle of the neck had to be changed so the bottle molds would fit into the blow molding machine,” says Ed Campbell. “The blow pins are fixed within certain measurements, and these molds take up every centimeter of the platen.”

The aluminum blow molds with beryllium inserts were made by Heise Industries (East Berlin, CT), which Campbell calls a Class A mold shop. He also credits Airopak’s Lee Mount, vice president of molding technology, with developing a head tooling and process package that would permit the same parison to mold what essentially becomes two different bottles. Because of the neck angle and tilted molds and blow pins, the molds on each side of the machine face in different directions.

The last major challenge was to be able to vacuum out of each bottle all the residual fluorine and nitrogen gas. The Bekum blow molder operates with three stations: blow molding, transfer and trimming of flash. Even though the blow pins are used to exhaust gas in the molding station, because the bottles are blown with a dome covering the neck, secondary evacuation was necessary. Airopak modified the flash trimming station to perform the secondary gas vacuuming operation.

In the process, two parisons are formed and then captured by two molds from one side of the machine. Once the container has been blown, the molds open and a set of arms grip the bottle and move it to the trim station. While the flash is being trimmed, a vent tube is sent into the bottle to vacuum out the gas for trans-fer into a scrubber. Although a considerable amount of flash is required to make this bottle, Airopak is able to recycle 100% of it back into the outside layer, Kallish reports.

After discharge from the Bekum machine, the bottles are transferred to a downstream trimmer/reamer from Seajay (Neptune, NJ) that removes the dome and reams the bottle neck and finish so the bottle will be leak-resistant once the CR cap is torqued on after filling.

The resulting bottle is beefy, about 25% to 30% heavier than most half-gallon bottles, Kallish says. Pennzoil doesn’t want to reveal the gram weight, but Kallish does say that it’s 15% to 20% lighter than what Airopak predicted for its high-end weight.

See the main story that goes with this sidebar: Blow molder comes to Pennzoil’s ‘Rescue’