Crisco goes on a diet

Larger bottle sizes of Procter & Gamble's venerable Crisco oils now have the proprietary shape of the rest of the line, and they weigh 25% less than before.

David Newcorn
Procter & Gamble?s redesigned 64- and 128-oz bottles of Crisco (above) now reflect the chevron-bedecked look of the rest of the

In May, some consumers across the U.S. may have believed that Procter & Gamble's Crisco-brand oils had just become available in 64- and 128-oz sizes. The truth, however, is that they've always been available in those sizes; it's just that now the high-density polyethylene bottles have been redesigned to look like the highly recognizable, chevron-bedecked 32- and 48-oz bottles in the rest of the line. "When consumers buy these, it looks like the Crisco they're used to buying in the smaller sizes," P&G spokesperson Lisa Hulse Jester tells Packaging World. "From a brand standpoint, that's a real benefit." Previously the larger sizes were packaged in a generic, teardrop shape. The main reason for the redesign, according to Jester, was to reflect the familiar look of the smaller sizes in the line. However, an important secondary benefit was lightweighting: The 64-oz bottle now weighs 65 g and the 128-oz bottle weighs 105 g. Both represent about a 25% reduction over their previous weights. P&G estimates the redesign keeps 1.2 million lb of plastic out of the waste stream each year, according to Jester. Jester declined to share how P&G achieved the reduction in weight, except to say "there are proprietary ways to maintain the overall rigidity of the bottle." However, it is believed that no new radical technology was used. Rather, it's more likely that the bottles were simply redesigned from the ground up to meet the lower weight targets set by P&G's packaging engineers. The chevrons and diamond shapes may also be part of the answer, since they likely reinforce bottle rigidity and add top-load strength while permitting thinner sidewalls. P&G acknowledged the new bottle also results in faster cycle times for its extrusion/blow-molding vendor(s), which it declined to identify. P&G elected to remain with HDPE on the larger sizes despite the fact that the material can't match the clarity of polyethylene terephthalate used in the smaller sizes. However, PET would have likely required more material in order to achieve the strength required for the larger sizes. Another significant benefit is increased shipping efficiency. Because the bottles have a rectangular footprint versus the previous oval/round shape, P&G is able to fit up to 25% more bottles on a pallet. The improvement in pallet payload has also resulted in reduced damage to pallet loads during distribution, according to the company. The new shape has also created efficiencies on the packaging line. Jester reports "it has helped us significantly decrease changeover time between sizes," although she declined to say how. However, she did note that the neck is now centered like the rest of the line. This would inevitably result in a reduction in time required to change over the filling equipment compared to the previous, off-center neck on the previous 64-oz bottle. Also, the 128- and 64-oz bottles appear to be designed with the same width. In fact, four 128-oz bottles grouped together occupy the same space as six 64-oz bottles, suggesting that the same case size can be used for both bottle sizes, providing further changeover efficiencies. A display case for club stores was also redesigned so that the new package shape can be seen from all four sides. Specific figures for savings in materials as well as packaging and shipping efficiencies were unavailable. The bottles themselves continue to be made of "a proprietary HDPE composition," says Jester. The material is believed to contain barrier layers. However, the containers remain just as recyclable as before, and they continue to be molded with SPI's recycling code 2 on the bottom. They also continue to be in-mold-labeled with HDPE labels, believed to be gravure-printed. A final benefit of the new bottle is that it's easier for consumers to handle, thanks to the slight pinch-waist area and centered neck. The handle of the gallon size was redesigned to have a more comfortable grip. The drip-resistant neck finish with tamper-evident pull-ring have not changed. "Consumers tell us they like the improved ability to hold the bottle and pour," concludes Jester. 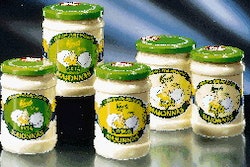 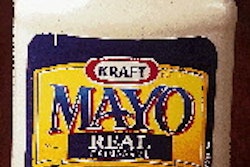 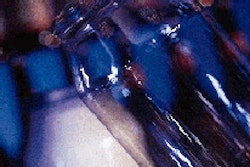 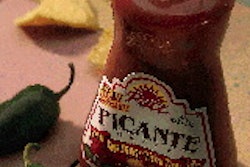