The skinny on job satisfaction

Packaging professionals seem to have nicely weathered the recent economic downturn, with its layoffs and pay cuts. 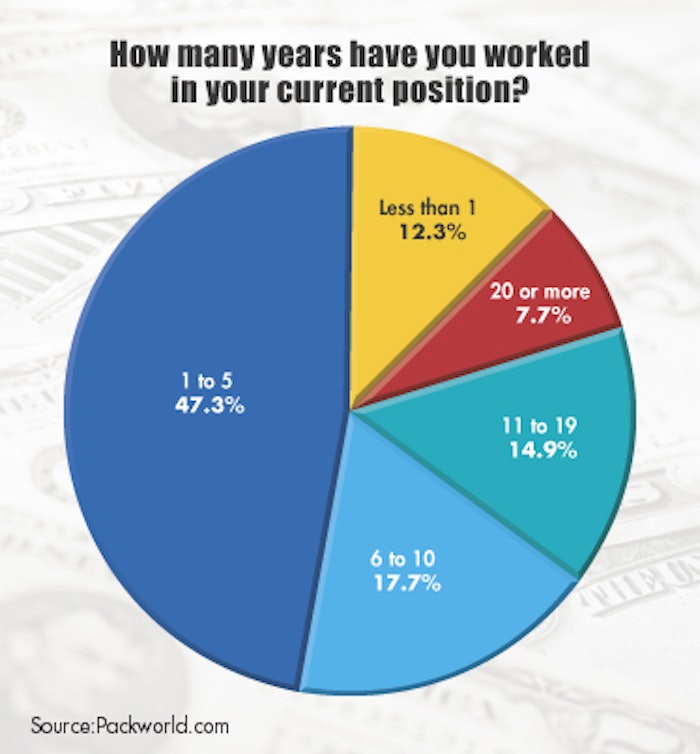 Editor’s Note: In March and April of this year, 389 packagers responded to a Packworld.com survey concerning salaries and benefits. The results of that survey showed that packaging jobs can be downright lucrative (see Packaging World, July, 2002, page 50). The following Web Exclusive story is based on verbatim answers provided by these packagers concerning job satisfaction—and dissatisfaction.

Packaging professionals seem to have nicely weathered the recent economic downturn, with its layoffs and pay cuts. For the most part, packagers participating in the survey were content with their incomes and satisfied with their jobs. That said, many found the recent Packworld.com survey a forum to express situations that were troubling them.

Several packagers responding to the Spring 2002 salary survey projected a sense of pride in their careers. For example, a plant manager at a southeastern food producer said she believes in "supporting success and the growth of the company, and increasing skills," when asked to describe what provides her with the most job satisfaction.

Job satisfaction most frequently came in the form of respondents who felt their work "made a difference" in people's lives. Other positive job aspects listed included

Can't get no satisfaction?

Still, it's human nature to convey dissatisfaction, and survey respondents weren't shy. One packaging representative with a chemical and cleaner business in the Northeast griped about "poor department communication and prioritization by upper management [who provide] no clear direction," said a packaging representative with a chemical/cleaner business in the Northeast.

Concerns related to management crisscrossed a variety of issues. One such concern was described by a packager at a southeastern industrial products manufacturer as "convincing management that short-term capital investments reduce costs in the long term."

"Upkeep of old machinery that is hard to keep efficient at 21st-century speeds," grumbled a maintenance worker at a food processor in the Southeast.

"I would love to replace some of our packaging equipment with higher-speed, lower-maintenance systems, but I have to make do with what I have," said an apparently unhappy engineer with a Mid-Atlantic food company.

A purchaser with a midwestern industrial products maker said "determining and maintaining control of packaging specifications" was a source of dissatisfaction. "Our organization is so tightly controlled by overdetailed QS-9000 procedures that I have major battles over supplier and item changes."

"We create graphics for packaging, and it's a difficult job because of the subjectivity," said a marketing professional from a West Coast maker of nonfood consumer goods. "There are many people in the approval process, and they all want to interject their personal opinions."

Similarly, a respondent from a packaging buyer in the Midwest noted there were "too many changes to overall design, because the people in charge do not have a concept of what they want until they see something."

An unusual challenge was the subject of concern from a food producer's representative in the Midwest: "Managing inventory of packaging items located at a co-packer. Everything is handled manually, so I have no ‘real-time’ information, which makes it hard to manage the inventories."

The sensitive labor issue reared its head when a worker with a midwestern nonfood consumer products producer complained about "working with the union relative to improvements in packaging equipment changes."

Several others faced hurdles when it came to acquiring necessary materials or machinery. An engineer with a midwestern industrial products company explained his challenge as "getting people to change the packaging process when we have packaging problems. If I am asked to resolve a problem and I select equipment, even inexpensive manual equipment, the management does not want to really change. They keep doing things the old way and putting up with the damaged product," he said.

"We are a small company and the mandatory minimums are difficult, so we often buy a 10-year supply of packages," noted a less-than-pleased R&D representative with an industrial products maker in the Mid-Atlantic States.

"Not having more input on film structures chosen for packaging, yet being responsible for answering questions in general, or when issues occur," was the complaint of a worker with a southeastern food manufacturer.

Dealing with "regulatory agencies is time-consuming and not always fruitful," pointed out a participant with a beverage maker in the Northwest.

A midwestern industrial business professional said that "many design engineers do not work well with me, and that makes packaging come at the end of a project. It would be better if we considered it early. Engineers always want packaging yesterday."

The relationship between package engineering professionals and marketing also caused angst among some respondents. A worker at a food producer in the Southeast said dissatisfaction came from "dealing with marketing, because they have no concept of mechanics."

A representative of an industrial products maker in the Southwest added that "last-minute changes from marketing regarding the packaging," was problematic. "Marketing would not grasp the concept of lead-time required. Some changes would mean that all the work done to date would be obsolete."

Another's beef was "responding to 'what if' inquiries that come from the sales department." The subject was the lament of an engineer with a southeastern beverage business. "They want to make changes to the carton and bottle with no cost."

Many respondents described challenges regarding supplier issues. A northeastern chemical company's packaging representative expressed dissatisfaction because management was "shopping around for the cheapest price. This negates the creative, worthwhile design-and-supply capabilities of some vendors simply because the bottom line cost is more than others."

Another vendor challenge was expressed by a marketing representative with a medical- pharmaceutical firm in the Midwest who was dissatisfied by her company "changing vendors, because of all the documentation necessary to qualify the new vendor when time could be used better to develop a new product."

Similarly, "screening potential vendors takes too much time and most of them do not have the capabilities required," complained a purchasing agent with a nonfood consumer products maker in the Northeast.

On the same subject, a packaging professional from a northeastern food company grumbled, "interviewing potential new vendors and responding to the never-ending calls from vendors asking for my time."

A manager with a midwestern chemical company seemed frustrated by "sourcing the best suppliers, because everyone seems to offer competitive equipment until you get further into a project. Then you start to find out the potential vendor's weaknesses."

An engineer with a midwestern industrial products producer noted, "trying to keep our current supplier cost competitive," was difficult. "Like everyone else, our supplier is trying to make money. We have grown up with this company. They have been our number one supplier for over 30 years."

Finally, an engineer with an industrial products maker in the Mountain States likened his company's dealings with vendors to "herding cats. There's too much decentralization that has too many people contacting too many suppliers. The suppliers get confused and ask for more clarification and direction from the company."