After a '90s makeover, Charlie the StarKist Tuna resurfaces on packages of a new product, Ready Mixed Tuna Salad & Crackers. The product is a more convenient form of the Lunch Kit that StarKist Seafoods, Newport, KY, has been marketing for about four years.

The new pack is a lot simpler to assemble. It includes a two-cavity thermoform of polyvinyl chloride, one cavity for the steel can of tuna salad, the other holding a film-wrapped slug of crackers. The Lunch Kit, on the other hand, includes a can of tuna, pouches of mayonnaise and relish, a wrapped napkin and a bowl and spoon for mixing. While it sells for $1.59, the new mixed tuna salad pack is $1.29, says Laura Young of StarKist Seafoods, Newport, KY. The new thermoform is made with an integral die-cut hanger tab, as well as a molded foot for stand-up display. "This versatility gives the package the potential to migrate into stores where you won't normally find tuna," says Jerry Kathman of Libby Perszyk Kathman (Cincinnati, OH), the company that designed both graphics and structures for the package. The thermoform is heat sealed with a coated 20-pt SBS paper lid, printed offset in six colors and varnish by Smurfit Flexible Packaging (Schaumburg, IL). "We originally suggested a two-piece thermoform with a living hinge. But this package is a more cost-effective execution," Kathman says. National rollout of the new product began in June, Young adds. 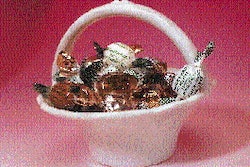 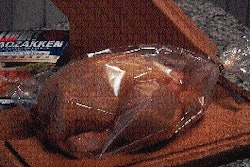 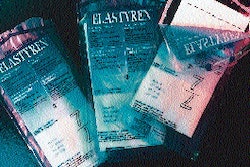