By printing a QR code on the side of aluminum beverage cans, this Canadian firm and three partnering beverage producers are lifting spirits in this time of pandemic. 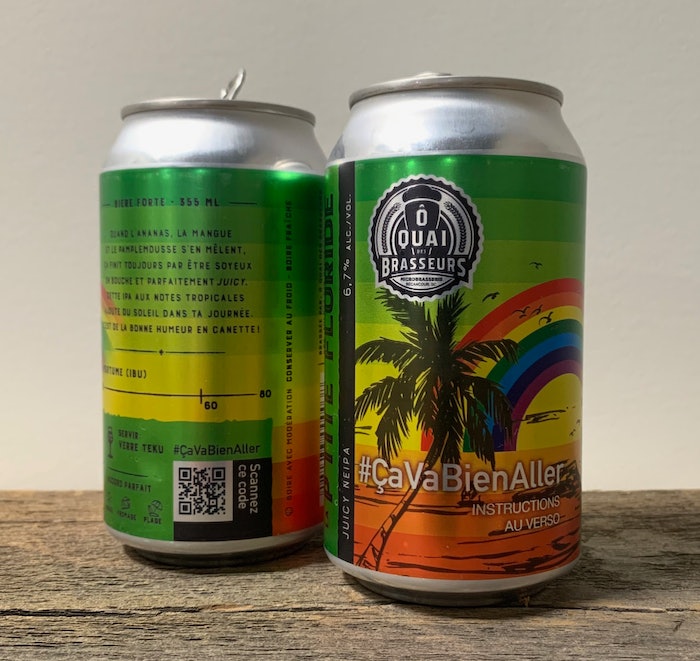 Direct digital printing on aluminum cans is what made this slogan-and-rainbow campaign possible.

Quebec startup SoluCan is the first company in the world to install a Tonejet Cyclone direct-to-pack digital beverage can printer. Go here for a detailed look at the innovative Tonejet technology being deployed by SoluCan.

Lately SoluCan has teamed up with three of its customers to use Augmented Reality technology from Zappar on an AR project that builds upon the "ça va bien aller" slogan-and-rainbow campaign that has become enormously popular in Quebec ever since the coronavirus pandemic struck. The English translation of the slogan is “things will get better.” Countless homes, schools, and businesses across Quebec have been displaying the slogan and rainbow in their windows as a sign of solidarity and a message of hope in the face of Covid-19.

Customers partnering with SoluCan on the slogan-and-rainbow campaign are two craft brewers, Ô Quai des Brasseurs and le Temps d’une Pinte, plus a maker of kombucha called Kombuchanv. Printed on the aluminum cans containing their products is the "ça va bien aller" rainbow logo plus a QR code that, when scanned by an enabled mobile device, takes one to an interactive WebAR experience. WebAR is a new way to access AR content through a web browser rather than an app, and Zappar is a leader in its development. It means all you need to have an AR experience is your smartphone or tablet and an internet connection. There’s no need to download an app directly onto your mobile device. You open your camera, scan the code, and a Web page opens up that acts as the gateway into the AR experience.

“When you scan the QR code you’re taken to the Zappar Web portal,” says SoluCan President Sebastien Baril. “There you have the AR experience of having your face surrounded by virtual objects. First it’s clouds and stormy weather, but then the stormy weather gives way to puffy white clouds and a rainbow over your head. It took about a day to get everybody on board with the idea, and then it was just a matter of printing the cans. Without digital printing we could never have pulled it off.”

The whole idea, says Baril, is to bring some color to the monotonous gray confinement in which we find ourselves these days. All stakeholders are participating in the project voluntarily, and a portion of the profits from the products sold in the clever cans is going to charitable causes.

Be sure to go here to see the slogan-and-rainbow campaign in action.

Jokey Treplás moved into its new production facility where it will operate in the future under the name Jokey Iberica.
Jokey Group
Apr 8th, 2021

Packaging for the Schick Xtreme 3 Disposable Razor is a thermoformed BOPP tray with film lidding. Now, consumers can choose the same razor design but now with a recycled (and recyclable) PP handle in a recyclable kraft-style paperboard PCR carton.
Matt Reynolds
Apr 1st, 2021
More in Design