The automated stacker crane is a central component of the customer’s new automated storage and retrieval system (AS/RS).

It swiftly transfers packages of fiber cement boards from an immense racking system to workers at ground level. The boards are over 12 ft long and weigh 12,000 lb/package. (Typical crane loads are 2,000 to 3,000 pounds.)

Bastian Solutions knew a standard crane just wouldn’t cut it. It couldn’t be a scaled up version of a smaller crane. In fact, the specifications for this crane were so demanding, the safety, mechanical and structural analysis was in design for almost two years.

• The crane couldn’t be attached to the top of the building, because it could potentially take down the entire building

• Multiple points of redundancy needed to be accommodated to meet safety

It’s Like Lifting Five Toyota Sequoia SUVs
The density and length of the load made drive selection and torque outputs challenging to say the least. The end user specified a Mitsubishi Electric control system, but Bastian Solutions selected Mitsubishi Electric for the drive components.

A specialized automated warehouse drive was just being introduced to the U.S. market and Mitsubishi Electric distributor, Allied Automation was more than happy to provide it. Allied Automation also brought in a third-party provider, SICK Sensor Intelligence, for the crane’s dual-laser distance sensor. That meant the drive had to interface with the laser feedback device.

Bastian Solutions would be one of the first in the industry to benefit from the industry-leading performance and built-in functionality of the new drive. The crane-specific capabilities included load slippage prevention and anti-sway control for automatic suppression of swinging objects as they’re being moved by the crane —without any adjustment by the operator.

The crane would be lifting the equivalent of five Toyota Sequoias throughout the day. The size, shape and weight of the load necessitated two vertical axes and two horizontal axes. The project engineer Tom Palcheck says, “We had to have multiple drives per axis working in coordinated motion to make it work.” And while some crane functionality was already engineered into the drive, there was a fair amount of custom firmware required.

Bastian Solutions got a lot of support from Mitsubishi Electric field application engineers. Tom says, “They went right to work, making the firmware changes that would allow us to do what was required.” They added:

• Horizontal sway control to make sure the load stayed level

Typically, the crane would be controlled by the Warehouse Control System (WCS). In this case, the crane was designed as a standalone system. All the intelligence is built into the drive to ensure a true representation of where the crane is at all times. The drive communicates to the main PLC over a CC-Link IE Field Safety Network.

This was an important part of the design, because there are two sources of feedback for the crane: the laser and the motor. Both had to be taken into consideration. It made sense to do it in the drive because it simplified the design. There was:

During the Factory Acceptance Test, the stacker crane met performance criteria with flying colors, achieving full-speed and full load results. (The site acceptance test went just as well.) This was definitely the biggest crane Bastian Solutions has ever built. Their customer now has an automated crane that:

• Keeps track of where products are stored

• Shares information with an external system

Aerospace. It opens up a fairly big and underserved market for Bastian Solutions. That truly is an engineering feat. 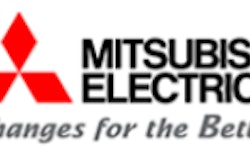 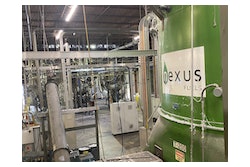 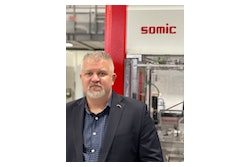 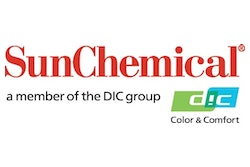