IPPO founder Åke E Andersson passed away at the age of 92. He was a notable figure in Swedish (and international) packaging history, having made invaluable contributions to the packaging industry at large. 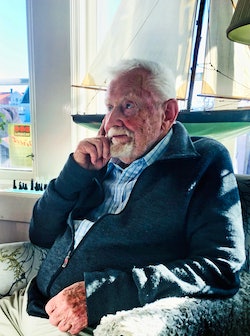 Åke E Andersson has left the stage after a long life as an enthusiastic and driving spokesperson for the packaging industry. Åke's commitment to increasing the wider knowledge of the merits of modern packaging technology was almost limitless, and his ideas and actions greatly contributed to creating a worldwide reputation for Nordic packaging development.

Åke was so motivated when it came to broadening and clarifying the knowledge about the benefits of new packaging that he was often far ahead of the innovators’ own ambitions to spread their news!

With the trade magazine Pack-Distribution as a foundation, he started in the industry in 1966, organizing international exhibitions, seminars and fairs in all corners of the world, all the while flying the Nordic flag high. Sometimes he rented entire aircraft to get packaging industry representatives out on long-distance information trips for the dual purpose of teaching the Chinese, Japanese and Americans what Sweden could do and at the same time create a Swedish understanding of the conditions for success in the major export markets.

Åke was also the mastermind behind a series of "inward missions", where journalists from all corners of the world flew to Scandinavia to be informed about technology and trade development in the Nordic packaging industry. It’s impossible to quantify the extent of the PR benefit these campaigns created in the form of journalist’s reports in many countries' trade press.

It also led to Åke being able to initiate his idea to form an international press organization for packaging journalists and editors. It was named IPPO, International Packaging Press Organization, and Åke led it for nine years as president. This is how Åke writes in his memoirs from the time when he was editor-in-chief of the magazine Pack in Sweden:

“The magazine Pack carried out a lot of events under its own auspices. One such occasion was an international conference in 1974 in Helsingborg, where Swedish companies showed news and lectured about themselves in front of twenty invited foreign colleagues, editors of packaging magazines in Europe and the USA.

I came up with the idea for the formation of an international press organization for packaging editors. I came up with the name IPPO, International Packaging Press Organization, which was formally formed the following year. For nine years I led the organization as its first president and with my British colleague Pauline Covell as secretary during a series of meetings, seminars, exhibitions and special events. Ippo is today, I think, the largest and perhaps the only international association for professional editors with today (2017) over 80 members from more than 25 countries.”

Åke E Andersson ended his long career in packaging by writing chronicles in the Nordic packaging magazine nord emballage and being a mainstay in discussions on virtually all topics in the industry.

Over the years, Åke helped start institutes for packaging technology in Beijing, Seoul, Karachi and Cairo, mainly focused on developing the institutes' information on technology aimed at the mass media. He was also involved in developing several different fairs in Sweden, fairs unrelated to packaging, and he also produced a number of supplements for publication in Sweden's largest daily business magazine. His wife Ulla Hurtig: Ason was an artist, and it became Åke's role to arrange exhibitions in the art world. There were also a couple of books, such as the novel Alijas.