New cobot case erector can handle random case sizes in a footprint that is 60% smaller than a traditional robotic case-erecting system. 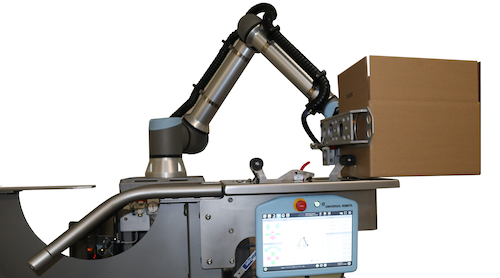 The XPAK ROBOX is equipped with a UR10e cobot arm that can randomly erect any box size on-demand without changeover.

Collaborative robots have come a long way since first breaking on the PACK EXPO International scene roughly five years ago. Universal Robots was among the first to launch the technology, introducing its UR5 six-axis robot in 2015. At this year’s show, the company broke new ground again with what it said is the first solution for random robotic case erecting. The new UR-powered, XPAK-developed box erector, called the XPAK ROBOX™, allows packagers to randomly erect any box in their suite on-demand without changeover.

“This collaborative design not only enables the operator to safely and intuitively interface with our machine, ROBOX also realizes approximately 60-percent reduction in terms of the footprint required for a similar machine using more conventional robotic technology requiring fencing,” said William Reilly, Technical Sales Engineer with XPAK. Reilly added that the company developed ROBOX as it recognized the undeniable market trends toward collaborative robotics, now the fastest-growing segment of industrial automation.

The XPAK ROBOX is equipped with a UR10e cobot arm that picks a flat box from one of two magazines, squares the case, folds the bottom flaps, and seals the flaps with 2-in. tape. Additional magazine and custom box conveyance options allow the XPAK ROBOX to integrate seamlessly into virtually any packaging environment.

Explained Universal Robots, the UR10e is the largest cobot in its new flagship line of cobots, the e-Series, which was also showcased for the first time at a PACK EXPO. The e-Series features built-in force/torque sensing, “unrivaled” safety features, and improved precision for faster integration in a wider range of future-proofed applications.

“The e-Series strengthens the core principles defining collaborative robots: fast setup, easy programming, flexible deployment, safe operation, and a quick ROI,” said Stuart Shepherd, Regional Sales Director of Universal Robots’ Americas region. “End users with complex applications and diverse or uncertain future needs will benefit from the e-Series platform and our unique UR+ ecosystem, knowing their investment will be able to grow with them as their needs change.”

The e-Series includes a rapidly expanding portfolio of certified UR+ plug-and-play end effectors, software, and peripherals certified for UR cobots.

QC Conveyors introduces the Flextrac Series of modular plastic chain conveyors designed for packaging, automation, and part handling applications. They can handle loads up to 850 lb with speeds up to 160 fpm.
QC Conveyors
Feb 7th, 2020

These configurations increase the scope of products and pack patterns that the CEL5 series can handle.
ESS Technologies
Jan 31st, 2020

Get loads together, then keep them together, with a systematic approach to stretch wrapping.
Sterling Anthony
Jan 31st, 2020

Qimarox introduces the Prorunner mk10 modular pallet lift for pallets up to 2000 kg. It can transport up to 60 pallets/hr.
Qimarox
Jan 28th, 2020

Ranpak announces the North American launch of the FillPak Trident, a packaging solution for medium and high volume shippers such as E-commerce hubs and fulfillment and distribution centers.
Ranpak Corp.
Dec 20th, 2019

To maximize how much product could fit on a truck for shipment, Canadian tomato farm Cecelia Acres wanted to stack its pallets higher than its employees could comfortably handle. A Kawasaki CP180L robot integrated by Caxton Mark did that and more.
Aaron Hand
Dec 19th, 2019

Inconsistently sized blisters of sliced cheese present a challenge when it comes to placing the same number of packs in a carton. New robotic system provides the solution.
Anne Marie Mohan
Nov 2nd, 2019

EndFlex’s Z.ZAG palletizer automatically uses vacuum generators to pick up cases one at a time and place them on a pallet from above. Its suction capacity is capable of lifting 40-lb boxes at speeds up to 360 boxes/hr.
EndFlex LLC
Oct 23rd, 2019

Plant-based Truly Green Film from Polypack is derived 100% from sugar cane, and attendant machines can run it without a hitch. Applications include retail and distribution packs.
Matt Reynolds
Sep 27th, 2019

Streamlining the loading process with easier case loading via a Modular Expandable Magazine increases the capacity of case blanks in the machine.
Matt Reynolds
Sep 24th, 2019

Modularity in machine design is a theme that frequently echoes when PACK EXPO rolls around, and PACK EXPO Las Vegas 2019 was no exception.
Pat Reynolds
Sep 24th, 2019