Cobots are now the fastest-growing segment of industrial automation, expected to jump tenfold to 34% of all industrial robot sales by 2025, according to the International Federation of Robotics. In a press conference held Sept. 10 at the IMTS manufacturing trade show, Kay Manufacturing, a small precision machining company headquartered in Calumet City outside Chicago, was presented with Universal Robots’ (UR) Golden Edition Cobot, in celebration of the supplier’s 25,000th unit sold. At the event, Universal Robots President Jürgen von Hollen delivered the cobot, with joints in a rich golden finish, while emphasizing how the company couldn’t have reached this historic landmark without customers like Kay Manufacturing.

Unlike conventional industrial robotic solutions that usually stay bolted down in cages dedicated to one task only, cobots are designed to work hand-in-hand with operators on a wide range of tasks, opening up more opportunities for human-robot collaboration. Kay Manufacturing is using UR cobots for end-of-line tasks, packaging, and palletizing parts off a conveyor.

Kay began looking into automation after it received an order that doubled its production output to over a million pieces per year. The engineering team first considered building a traditional automation cell, but after an internal review they concluded that build time, installation, robot programming, safety hardware requirements, and programming of all safety functional devices would be too costly and take far too long. “A traditional cell would not justify our internal rate of return and would consume most of our facilities’ technical resources,” says Brian Pelke, President of Kay Manufacturing. “It was a non-starter.”

Instead, the company looked into cobots from UR that don’t require the same safety setup due to a built-in safety system in the robot arms that make them automatically stop once they encounter obstacles in their route. “We quickly realized that UR cobots were the most cost-effective option, requiring the least amount of technical resources,” says Pelke, who estimates that each UR robot helps save $150,000 in annual labor costs. “UR has an impressive user interface, and it was easy to learn and cross train all of our personnel.

“The cobots didn’t replace any employees, we were able to meet increased production demand with our existing workforce, and we saved twenty minutes of operator time per hour, all while improving our ergonomic work environment and freeing up our staff to handle more value-added tasks. We look forward to putting our new golden cobot to work and expect our fleet of UR cobots to grow even further as our production expands.”

Universal Robots shares that it pioneered the market by selling the first commercially viable cobot in December of 2008 and says it has kept its early frontrunner position with a 60% global share of the cobot market, selling more cobots than all competitors combined.

Said von Hollen at the press conference, “With this event, we celebrate not just the success of Universal Robots in empowering customers, but also the successes of our customers in innovating and changing their workplace with collaborative robots. The Gold Edition Cobot reflects our continued commitment towards making the unlimited potential of robotics accessible for all.” 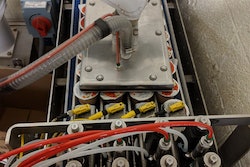 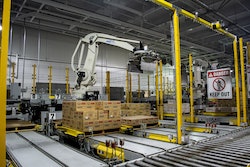 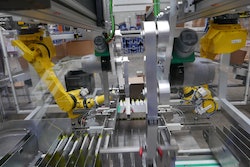