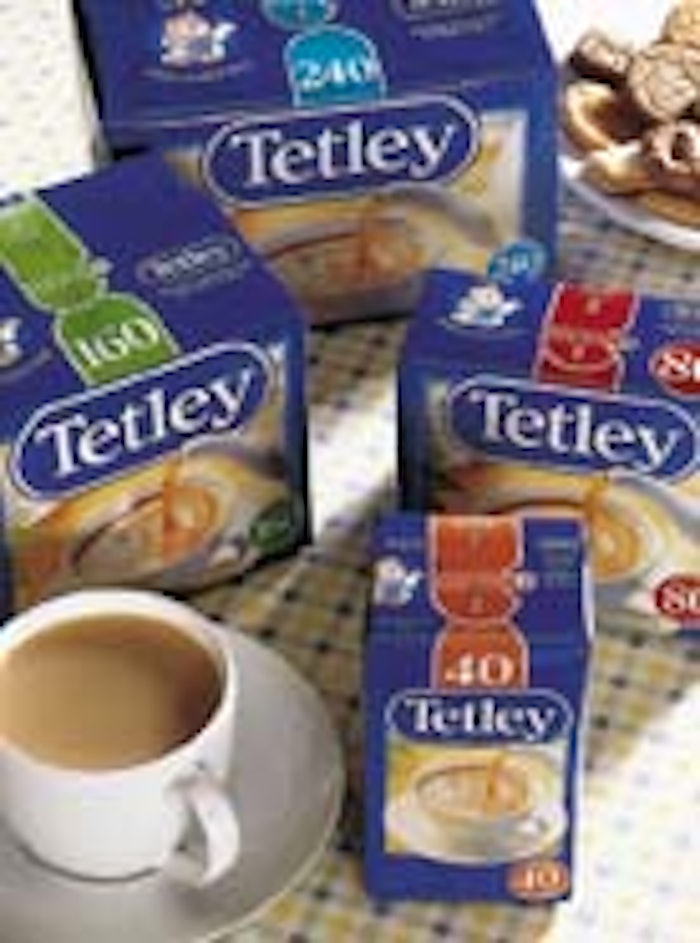 Project manager Andy Pepper describes the packaging material as a two-layer adhesive lamination of polypropylene and paper with an extrusion coating of polyethylene for heat-seal purposes. He doesn’t identify the supplier, but he does confirm that the European parent company of UVA Packaging (Richmond, VA) designed and built the machines that make the Soft Pack bags.

Tetley marketers are excited about the package because it’s such a fresh new look, structurally and graphically, in a category that’s badly in need of modernizing. The company also believes the flat-bottom bag delivers advantages compared to a carton for both retailers and consumers. Retailers, says Tetley, like the reduced linear facing and smaller unit cube. Consumers also appreciate the compact package size as well as the fact that it keeps the product fresher, is resealable and is dust-free.

The reclosure feature on the package is a strip of tape running up the back and over the top flap. Consumers are instructed to pull a perforated strip across the top of the tape to open the package. Once they’ve opened the heat seal at the top of the package, consumers can remove tea bags at will. Reclosing is just a matter of folding the flexible material and pressing down on the tape strip.

Currently, the new package is available in England and Ireland, says Pepper.

Multi-Conveyor recently built a dual lane hand-pack line, made up of a series of small conveyor sections, all joined by seamless transfers, that manually feed a new merging section to further semi-automate for one of its customers.
Multi-Conveyor
Dec 1st, 2020

Fallas combines the features of its case erector for pre-formed, pre-glued cases with its plunge-style case former for flat blanks to enable RSCs, Display Ready Cases, beer trays, and other case/tray styles to be created on one machine.
Anne Marie Mohan
Nov 12th, 2020

With a standard 260% load stabilizing pre-stretch, the MA-DX2 incorporates a second rotary arm and film carriage on the opposite side of the load.
Natalie Craig
Nov 11th, 2020

The Performance Case Packer is a case and tray packer designed and engineered with key performance features in mind, including pick-and-place gantry and an innovative infeed system to reach loading speeds up to 250 containers/min.
Pat Reynolds
Nov 11th, 2020