Six robots on a new packaging line at Czech dairy Choceňská mlékárna quickly and gently case-pack and palletize tubs of product at 20,000/hr. 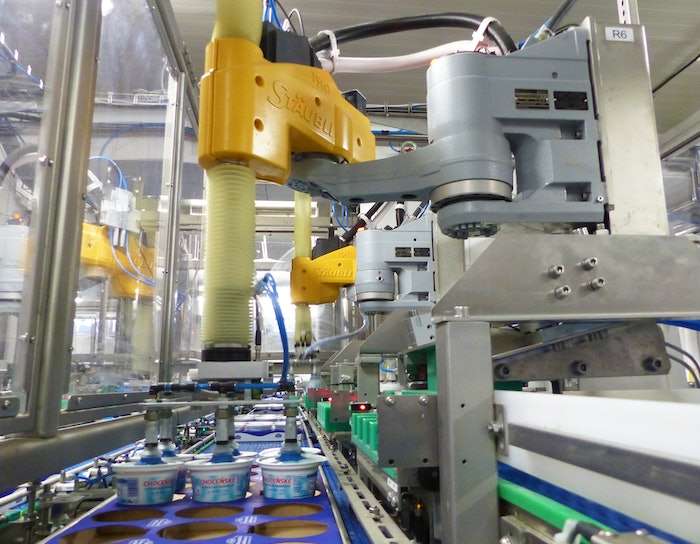 A SCARA robot picks six tubs of dairy product from a conveyor and places them into a corrugated tray.

In Choceň, a town 100 miles east of Prague in the Czech Republic, 90-year-old dairy Choceňská mlékárna produces spreads, yoghurt, and curd cheese to the highest quality standards. Last year, looking for reliable production for 20,000 tubs/hr of a Czech dairy favorite, it decided to go the high-volume automation route, installing a new packaging line with end-of-line robotic equipment from Stäubli.

Says Josef Brokeš, Technical Director at Choceňská mlékárna, “Even though cheaper solutions were available, we decided to equip the entire line with Stäubli robots. For us, Stäubli sets the standard in food production, and we weren’t prepared to settle for a second-best solution.”

The company commissioned TMT spol with planning and implementation of the line. The systems integrator assembled the complete system at its production site near Chrudim, Czech Republic, testing and optimizing each station down to the last detail. Any potential disruption to existing production at the plant had to be minimized, as loss of output would be very costly.

After successful precommissioning, TMT set about installing the line at Choceňská mlékárna in record time. Says Brokeš, “The specifications were extremely demanding. In order to maintain a continuous supply of these popular products to retailers, a target was set of resuming production within a maximum of two days. We were able to sign off the complete job in under a month. During the period of ongoing plant conversion, certain sections were automated, while others were still human operated.”

Today, more than a year after the line first started up, fully automated packaging and palletizing of 20,000 tubs/per hour has become standard. The complete system, with its 252-ft conveyor belt, is controlled by a Siemens PLC. There are four Stäubli TS60 SCARA robots and two Stäubli RX160 six-axis robots deployed on the line.

The task of the SCARAs is to pick the tubs off a conveyor belt as they leave the production stage and place them at high speed in corrugated trays, without damaging the trays as they travel past the station on a parallel conveyor belt. The TS60s first pick up three tubs with their vacuum grippers, rotate them 180 deg, and then pick up three more. The six tubs are then placed in the tray. This process is repeated until the tray contains 12 tubs. It is then transported by means of the conveyor belt to the next station, where four trays are stacked on top of one another.

The four trays, which contain 48 tubs or more (depending on the product variant) are then palletized. This task is handled by the two six-axis RX160 robots. If the robot were to cause a collapse of the man-high pile with an imprecise movement, the result would be chaos.

“The robots not only have to operate at high speed but also with extreme care,” confirms Brokeš.” They stack six four-tray layers per pallet, each layer comprising six sets of trays. That makes a total of 1,728 tubs per pallet.”

According to Stäubli, the pallets maintain their stability due to the robot’s smooth, judder-free trajectory. Says the company, only its patented drive technology is capable of achieving this while maintaining such high dynamics. The programming of the robot’s movement also contributes to the trouble-free operation of the six-axis machine, it adds.

Another key advantage of the system is its flexibility when changing over to different product variants. The products come in a range of flavors as well as in tub sizes of 150 and 200 g. According to Stäubli, changeover can be achieved within a few minutes, even if the grippers on the SCARAs have to be swapped. The quick-release system allows the gripper exchange to be performed “with a flick of the wrist,” it says.

Since installing the robots in 2018, Choceňská mlékárna has been highly satisfied with their performance. Says Brokeš, “These six Stäubli robots have made a significant contribution to increased production flexibility. Resetting the system to cope with different products can be done in no time at all, and with efficient automation, we are able to flexibly adapt the output of the line to the constantly increasing demand.”