There’s no place like interpack to see the latest in packaging machinery controls and automation. Here are just two examples of what the world’s largest packaging show had on display in the cartoning sector.

We start with what Italy's CAMA Group calls its Breakthrough Generation of machines, specifically the CL 175 cartoner. An alternative to standard top- or side-loading cartoners, it's a pitchless machine powered by a modular, scalable linear motor system that allows for independent control of multiple movers on straight or curvilinear paths. The linear motor is Rockwell's iTrack, which eliminates chains, belts, and gears and replaces them with simple, effective software profiles that redefine speed and flexibility in automation applications. In addition to greatly increased flexibility, the machine has a remarkably small footprint of approximately 13 x 8 ft. By Rockwell's calculations, a more traditional cartoner with comparable capabilities that did not deploy a linear servo motor might have a footprint of 26 x 11.5 ft. Worth noting is that adhesive application on the CL 175 shown at interpack was just as next-gen as the machine's linear servo motor, as CAMA opted for Nordson's Freedom system, a tankless heat-on-demand concept that reduces energy consumption and maintenance-related downtime caused by charred hot melt.

Meanwhile, over in Hall 14, Gerhard Schubert GmbH showed a cartoner with one robot for carton erecting, one for product loading, one for carton closing, and one for finished-carton discharge. Its standout feature, however, is not that it incorporates four robots but rather that all four end effectors can be changed automatically with a selection from a menu displayed at an HMI. Once this selection is made, no human intervention is required. A carrier device gets mounted on a "transmodule" that moves from one end of the machine to the other. Its first stop is at the carton erecting robot, which dutifully places its end effector on the transmodule carrier. The transmodule carrier then strokes to the opposite end of the machine so that the end effector can be placed in a storage rack. The transmodule carrier repeats this process three more times until all four robots have surrendered their end effectors to the storage rack. Then the transmodule carrier picks four new end effectors and delivers them to their waiting robots. In about five minutes, changeover is complete. 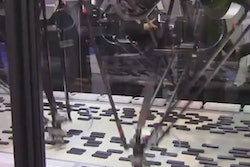 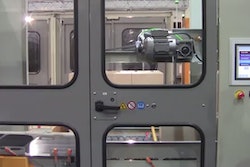 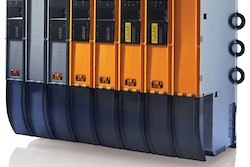