The L7 palletizer has standard AC motors and a machine control code accessed on a familiar PLC interface. But servo drives in place of VFDs bring big benefits.

Pat Reynolds
Compact drives. One thing Top Tier engineers and machine designers like about the servo drives is that they neatly fit in a relatively small controls cabinet.

With its L7 All Electric Palletizer, Top Tier has created a “hybrid” servo system by keeping standard AC motors, from SEW Eurodrive, but replacing Variable Frequency Drives with B&R Industrial Automation ACOPOSmulti drives in what B&R calls a “motion subsystem.” Why? Because the ACOPOSmulti drives are better able to operate a standard AC motor in an improved closed-loop mode compared to the VFDs used previously. This motion subsystem translates into much greater positioning accuracy and improved throughput, and this is what permits Top Tier to offer what they call PerfectPattern technology.

There might be as many as 25 or 30 drives per palletizing system, and these all fit nicely in a single control panel. They drive the SEW Eurodrive AC motors that are out along the palletizing system wherever they are needed for actuation of one kind or another.

In addition to sticking with standard AC motors in their controls architecture, Top Tier is also sticking with a Rockwell PLC, which provides all machine logic. Between this PLC and the B&R motion subsystem, communication is carried over EthernetIP. The B&R drives, like most standard VFDs, are essentially electronic slaves to the main PLC code. By keeping the Rockwell PLC in the picture, Top Tier acknowledges the simple fact that so many end users are so accustomed to Rockwell architecture and Rockwell PLC code. This way, Top Tier can say to its customers, “You want Rockwell code? You got it. But because we’ve replaced the VFDs with ACOPOSmulti drives, you now get the added benefit of PerfectPattern positioning. And don’t worry, your employees who operate and maintain this palletizer need not have any knowledge of B&R code.”

“It was really positioning control that we were after,” says Heston. “In a palletizer you have multiple simultaneous motions where large devices are moving fast and you don’t want collisions. So we switched to a system that allows us to operate the machine in a closed loop control, more like a CNC machine. We kept the SEW Eurodrive motors, but they all operate in a positioning feedback mode. So for our purposes, they perform just like servos.”

Other significant advantages that Top Tier now enjoys, says Heston, are energy savings, simplified maintenance, and a smaller control cabinet. “The B&R drives allow regenerative power to be used by any drive in the system,” says Heston. Regenerative energy captured as a byproduct of hoist lowering, for example, provides increased energy efficiency.

On the maintenance front, the replacement of a defective drive is completed in less than five minutes. Following replacement, all drive parameters automatically download from the PLC to the replaced drive. Drive programming and drive set-up are not required at the plant level.

And finally, there’s that smaller cabinet size. “The B&R drives are one inch wide,” says Heston. “That’s about a fifth the size of the VFDs they replaced.”

Another perspective on the cabinet size comes from Karl Robrock of Automation Resources Group, the B&R partner company that serves California and the northwest. “When Top Tier visited B&R after the last interpack, they were blown away by what they saw. And one of the things they saw was a solution to the problem of increasing control cabinet size. It had gotten to the point where machine design was being constrained by cabinet size considerations. Not any more. What they got, in a way, was the best of both worlds. They didn’t have to change anything of significance in the Rockwell code they had developed and invested in, code that so many customers say they want because it’s all so familiar to them and their people. Yet they brought in all those B&R benefits. It was a huge engineering investment, but now they reap the benefits every time they build a machine.” 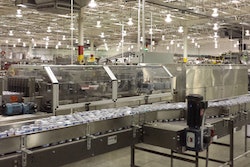