'Rock-steady' pallet stacks and use of readily recyclable bags win over customers.

Cement mortar producer Diamur of Antwerp, Belgium, produces 25-kg decorated bags of cement mix, shipped perfectly stacked in plastic-wrapped pallet loads. The ecology-minded company strives to use only the minimum amount of plastic wrap needed, and the pallets stay stable even after the plastic has been removed. This benefits users by avoiding the need for labor-intensive bag restacking or clean-up of broken bag spills.

Diamur began producing 25-kg primary bag sizes in 2008 and currently supplies about 80,000 tons per year for shipment throughout Belgium, France, and the Netherlands. Markets include the professional building trade, sold through building-material outlets, and the retail trade, sold through do-it-yourself stores.

In pursuit of cost-effective, quality packaging
As Diamur planned the introduction of its 25-kg bags, the company wanted the quality of the packaging to reflect its contents. According to Benedikt Van den Braembussche, Diamur’s president, “The advantage of plastic packaging over paper bags is that the mortar keeps longer and can withstand rain. Many outlets store the product outside, exposed to the weather elements. It also is easier to recycle the plastic bags because regular paper bags always contain plastic liners that can complicate straightforward recycling processes. Moreover, plastic packaging is less inclined to enable cement dust release. This gives both a safety and sanitation advantage.”

Still, Van den Braembusshe concedes that plastic bags do have a disadvantage versus paper bags. They are more slippery. So the pallets normally tend to be less stable and more prone to fall apart. (Diamur chooses not to disclose the specific type of poly film it is using nor the names of suppliers.)

The company tried to stabilize the pallets of plastic bags with hot melt adhesives. But the hot melt was so strong that it ended up causing the bags of cement mix to rip open when they were separated from the pallet. And, even on bags that weren’t torn, the adhesive residue and associated bag distortion often made it difficult to read the printed copy on the packaging. In addition, says Van den Braembussche, “The hot melt adhesive contaminated the palletizers. They had to be shut down and cleaned several times a day. This costly process, along with the destructive separation issues and related downtime, caused us to discontinue the use of hot melt.”

Another attempt to stabilize the pallets involved the use of double hoods to hold the loads in place. But this method increased stretch film usage and palletizing time and caused some depalletizing and unloading difficulties.

Water-soluble solution
After exploring various stack stabilization alternatives, Diamur discovered Lock n’Pop (www.locknpop.com), a liquid adhesive that is applied to the exterior of the packages during stacking operations to create stack stability and reduce the amount of stretch wrap required per pallet. This product is a water-soluble adhesive that loses its tack once it is separated from the packaging material and leaves no residue. Furthermore, Lock n’Pop is available in several formulas to accommodate specific applications, such as paper, corrugated, and plastic films. Diamur decided to check out Lock n’Pop’s possible performance benefits for its film bags of cement mix.

Initially, Diamur opted for a trial installation of the Lock n’Pop adhesive application equipment to confirm the product claims and evaluate the stability of the final product. Van den Braembussche says, “What we immediately noticed was that the stability improved so much that we were no longer dependent on double-layer stretch hooding. This not only makes things easier for the end user, but also for our own handling. The loads no longer fall apart during palletizing or during transport to the stretch hood machine or during unloading.”

Pleased with the performance test results, Diamur incorporated Lock n’Pop at two bag form/fill/seal/palletize production stations in the Antwerp plant. The stations pack and palletize up to 80 bags/min. The filled, sealed bags travel to the palletizers, passing under air-operated adhesive applicators positioned at the entrance of the palletizers. Safe and simple to operate, the water-soluble adhesive application system is fully automatic and requires minimal maintenance. The palletizers run smoothly without jams or shutdowns due to adhesive buildup.

Depending on the wishes of the customer, the bags may be stacked up to 8 per layer and 5 to 9 layers per pallet. Pallets weighing between 1,000 Kg (2,200 lbs) and 1,600 Kg (3,500 lbs) are moved from the palletizer to the hooding equipment. Now just a single stretch hood with a lower gauge film is needed to protect the loads. Then the perfectly stacked and aligned pallets are sent to the warehouse, ready for shipping.

Both Diamur and its customers are happy with the film bags in pallets stabilized by water-soluble Lock n’Pop adhesives. Van den Braembussche concludes, “Seeing the results of the improvements, we have decided to add two additional production lines using the Lock n’Pop.” 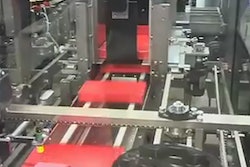 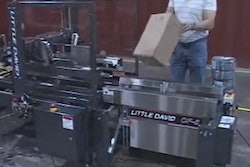