According to VCP packaging engineer Stephane Bernelas, the Design Box is a “presentation package” designed to increase VCP’s perception as a source of luxury products and reinforce its position as an innovative champagne house.

Whatever VCP’s design objectives behind the two-piece paperboard container—essentially a box and a sleeve--one thing is for sure: it’s erected and loaded on equipment (Figure H) every bit as automated as the end-of-line gear from Cermex. Custom-designed and built by ITCM, it consists of two large rotary wheels plus a side-load cartoner from Langenpac. Both rotary wheels are fed flat paperboard blanks. Even this task has been automated, as two Fanuc robots pick stacks of blanks and feed them to the rotary devices on which the blanks are erected.

Wheel #1 erects the box that holds the bottle. The use of some glue is included in the process, but most of it is fold and tuck. Also visible in Figure H are two small rotary drums in the bottom of the frame that feed flat blanks to Wheel #1. Wheel #1 rotates counterclockwise and discharges a finished box in the portion of the photo that’s circled.

Wheel #2 takes care of bottle insertion into the box. The transfer of boxes from Wheel #1 to Wheel #2 involves what ITCM managing director Bruce Paxton calls “some pretty fancy bits of pitch change and transfer. We transfer the empty box across two transfer devices to get it into the different pitch, timing, and orientation required by the second wheel. Perfecting the motions needed to pick a paperboard box and put it onto a tangential wheel with precision at 140 boxes/min is challenging to say the least. And to further complicate things, we also reverse the box from being open-side-out to open-side-facing-in so that it can receive the bottle in the second wheel.”

As bottles in their boxes exit Wheel #2, they’re transferred into a Langenpac side-load cartoner that erects a paperboard sleeve from a flat blank and pushes the boxed bottle into it.

A few final notes on the Design Box, which is supplied by SCA Packaging. Both box and sleeve are F-flute corrugated. Surface linerboard is pre-printed on an offset press in four colors plus varnish. Though it requires more paperboard material in its makeup compared to the more conventional folding carton it replaced, VCP claims its new packaging approach is more sustainable for three reasons:

• Advances in construction, combined with the inclusion of an ingenious F-flute corrugated, permitted the elimination of a polymer coating that was needed on the former VCP gift box; also, both fluting and linerboard are recycled material.

• The newly designed wraparound corrugated shipper is source-reduced compared to its predecessor.

• The paperboard used by Design Box converter SCA Packaging and by corrugated case supplier Seybold is certified by the Forest Stewardship Council. 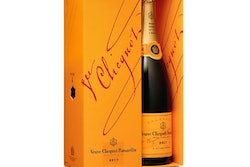 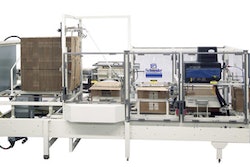 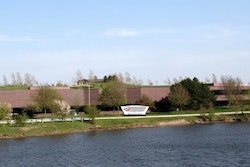