Riddled with servo motors and governed by a single integrated controller that handles logic, motion, and HMI, the Zero machine is right out of the future. 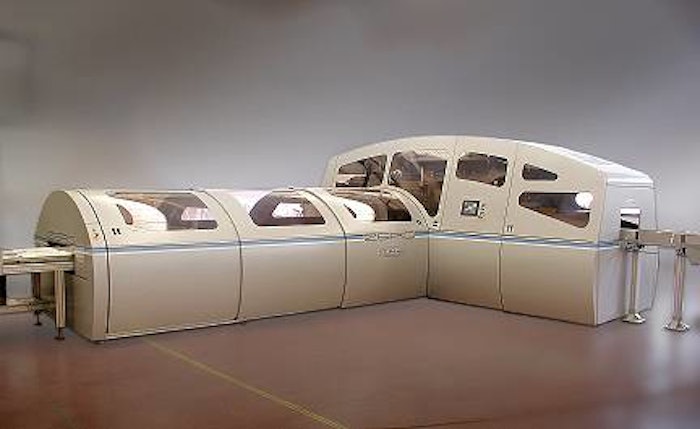 Now being shipped to customers in Europe and soon to North America is a third-generation packaging machine that really takes the cake. Like any self-respecting third-generation machine, it has no mechanical line shaft because it’s built from the ground up around servo motor technology. What sets it apart from its third-generation peers and predecessors is the number of servo motors it deploys: as many as 25.

Built by Tissue Machinery Co. of Bologna, Italy, the machine is targeted specifically for overwrapping paper tissue rolls. It goes by the name of Zero, a reference to the fact that it is a next-generation system built from scratch (from zero, in other words) around servo motor technology

And what lets TMC build machinery unfettered by mechanical components? Key contributions are made by servo motors and drives from Elau, as well as Elau’s PacDrive™ automation system. Unlike traditional controls configurations, where logic is controlled by a PLC, motion by a motion controller, and HMI by yet a third device, the controls in TMC’s Zero machine are all integrated in the PacDrive controller. Running Elau software, it handles motion, logic, and HMI. According to TMC president Matteo Gentili, this brings increased simplicity because “it eliminates the need for multiple software programs, thus improving communications.”

Gentili says the Zero machine produces up to 200 wrapped bundles/min, 40% faster than TMC’s previous-generation machinery. And where changeover from one tissue roll pattern to another used to require at least 20 min, it now takes no more than 5 min, he says. Faster changeover is a hallmark of servo systems, because more changes can be performed in software, at the push of a button, rather than mechanically.

Now in just its seventh year, TMC’s approach to designing and building machinery reflects its new-kid-on-the-block status in the way that it departs from most traditional packaging machinery manufacturing models. As Gentili puts it, “We are the brain, but we outsource for arms.

“In other words,” he continues, “once internal development and drawings are complete, we outsource the actual production itself to sub-suppliers. These sub-suppliers bring entire portions—product infeed, film infeed, machine mainframe, electrical cabinet—to our factory, where other sub-suppliers assemble the portions and wire them together. Actually the manufacturing is coordinated and facilitated over a network that gives all the sub-suppliers access to our files. So in a sense we work together in this networked fashion as manufacturing moves forward. When the machine is ready for power, our technician begins testing. This is how we build machinery.”