Packaging is often the problem when products and packages are diverted from retailers to reclamation centers. Credits issued are a growing cost for distributors and manufacturers, says a new report. 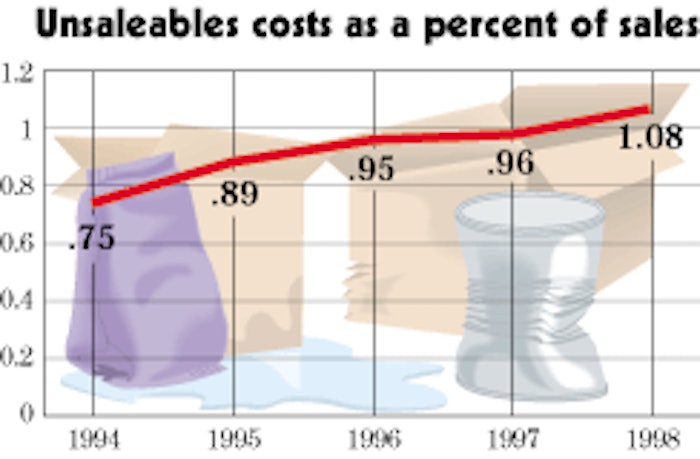 More than 1% of the gross sales of manufacturers is now being issued as credits for unsaleable merchandise, says a 1999 report published by Grocery Manufacturers of America, Washington, DC. Developed by a GMA task force, “Unsaleable Products” is a compilation of data from 58 manufacturers that represent more than $130 billion in annual gross sales.

Although a lot of factors share responsibility for “unsaleables,” packaging deficiencies are most often cited by companies that study the issue. The trend toward reducing the weight of packaging materials is specifically cited as a cause for damage that results in unsaleable merchandise. Another factor that was frequently cited was the inability of retailers to understand date codes on individual packages and on shipping containers.

For purposes of these studies, “unsaleables” is defined as products removed from the normal channel of distribution, regardless of the reason. Many of the causes relate to deficiencies in packaging, but others do not. While 58 companies responded to the benchmarking survey, 16 companies reported customer data used in benchmarking.

The average annual dollar cost among these 54 companies is $17.3 million, virtually the same total as the previous year. This is due, says the report, to a larger number of smaller companies being included in the results. For the fifth year in a row, most manufacturers say that the cost of unsaleables has risen either “significantly” or “dramatically” over the last five years, compared to fewer than 20% that report declines.

It’s not surprising that the minimal product handling inherent in warehouse clubs keeps this type of outlet at the bottom in terms of costs. More limited selection of merchandise is another reason why warehouse stores probably report a more modest rate of unsaleable costs.

While the study results establish the size of the problem for manufacturers, the survey didn’t begin to examine the causes. Together with lightweighting of materials and code date confusion, a nonpackaging factor was inefficient buying and selling practices that caused products to become unsaleable.

In place of a detailed discussion on problems was a look at what it calls “third-party” information on causes. This “third party” group is made up of consultants and reclamation specialists, some of which perform services for the manufacturers queried in the survey.

Two of them reported on the causes of unsaleable merchandise for ’98 in percentages of certain conditions (Table C). Source one in the table is reporting on more than 46 million packages from 31 manufacturers. The second source data covers more than 11 million packages it handled.

In the area of poor handling practices, the study reports that “packaging has been changing industry-wide for several years, often switching to be lighter in weight. In general, participants observed that products are exposed to more frequent and rougher handling than they are designed to take.”

Here, the recommendations were: to reduce the number of “touches” a product or package receives; use of standard high-quality pallets; more effective use of stretch wrap; test package “survivability” in a real- world environment, not simply in the lab; ship in full pallet layers; conduct cost/benefit analyses on handling practices; and train personnel about the effects of their actions downstream.

In terms of training, one distributor created a video training library to help employees learn about improved handling and the prevention and also the processing of unsaleables.

The cost/benefit analysis is the outgrowth of recognizing that improvements in levels of unsaleables can create a trade-off of quality merchandise vs productivity. The observers found, for example, that truck loaders in both manufacturer and distributor distribution centers were inclined to pass damaged goods to the next point in the supply chain, rather than replace them with undamaged product and initiate the paperwork to report the damaged products.

Dates printed on shipping containers are often not understood by handling personnel, the study found. The dates may represent the date of manufacture, a “best if used by” time, or a pull date. But companies often print only the date and not an explanation on the shipping containers. The study found variations in date meaning even across a single manufacturer’s lines of products.

The inconsistency–and lack of explanation–can cause misinterpretation of the date by distribution center or store personnel. This resulted in unexpired merchandise being sent to a reclamation center. Unfortunately, the study group could not identify a common date definition for the industry to use.

Recommendations for manufacturers included the development of a consistent dating scheme across all products shipped by that company; printing the date explanation next to it on the package; use of multiple dates and definitions, if needed; and that manufacturers and distributors improve checking warehouse inventories for proper stock rotation.

Improving stock rotation through better inventory management practice was strongly recommended for distributors. Noting that some affix a “license plate” label to each pallet of incoming merchandise, the study noted that the label often includes a date that often represents the “last ship date,” still a different date definition.

As might be expected, overhang and underhang of containers on pallets were cited as causes of damage. The study noted that damage was usually obvious to cases that protruded beyond the edge of pallets, especially at the lower tiers. However, it also found instability and container shifting in underhang situations, when cases didn’t extend to the edge of the pallet.

One manufacturer shipped loads with some cases stacked on their sides to prevent pallet overhang. However, the study noted that this practice minimized the structural strength of the container itself, contributing to damage. The company is reportedly planning to change the case cube.

Another company whose products displayed pallet overhang reported that it planned to reduce the case pack as its method to eliminate overhang problems. Another company said that it found, by shifting to a 12-case tier instead of 14, it could reduce overhang while it retained the ability to interlock layers, rather than using column stacking. This company, the study says, had focused on eliminating overhang for products that had high historical rates of damage.

Although problems with expired date codes were initially believed to be caused by poor in-store stock rotation, the study found that some distributors rely on manufacturer’s sales agents to rotate store inventory. At the same time, some manufacturers expect distributors to handle this function.

In one case, information and communications provided a good tool. A manufacturer that tracked unsaleables used that data to determine the products most likely to have expired dates on store shelves. This intelligence was provided to sales agents, who were instructed to focus their attention on these products during store visits. Along with a positive response from agents, the company reports more efficient product rotation at store level.

A wide variety of other packaging issues surfaced in the study. While the study generally endorses pallet stretch wrapping, it also found instances when the film wrapping created damage. Wrap applied too tightly causes side compression, and damage to some products can result.

When only the load and not the pallet is wrapped, the load can shift, sometimes creating overhang on one or two sides of the pallet. And some distributors see stretch wrap film as a maintenance nuisance, so the wrap is removed on receipt of the pallet because the film can damage fork truck wheels.

Other packaging problems cited include perforated cases for display that come apart in handling. Canned products that don’t nest when stacked, “bull’s eye” handholds on the ends of shrink-wrapped trays that can tear and certain types of dunnage in trailer loads were other packaging issues that caused unsaleable products, according to the study.

“Unfortunately, there is no ‘silver bullet’ that leads to unsaleables” says Mark Allen, director of industry affairs at GMA. “Rather, there is a series of practices that contribute to the problem. . .Those companies experiencing the greatest success in unsaleables cost management are committed to understanding root causes and have implemented a number of changes based on their findings.”

See sidebar to this article: Not all package problems