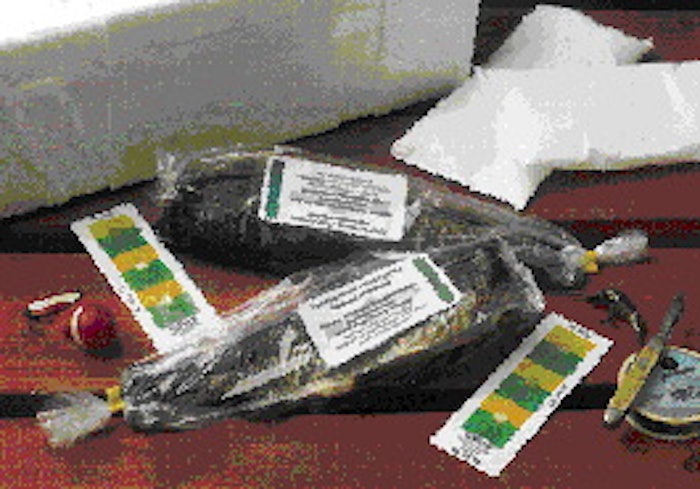 Time/temperature integrator tags (shown here and up close on p. 23) used by Top of the Mountain Trout Co. include three ?indica

Restaurants serving fine cuisine diligently monitor incoming food shipments--especially perishables--to assess food quality. Realizing that, Top of the Mountain Trout Company places time/temperature integrator (TTI) tags in the expanded polystyrene shippers it uses to ship smoked rainbow trout to its restaurant customers. As their name suggests, the tags use a combination of temperature and time to determine how long the trout will remain fresh.

Each shipment typically includes 10 to 20 lb of fish and one or more tags, depending on the size of the order. The Vitsab® tags, developed in Sweden, are marketed in the U.S. by Cox Technologies (Belmont, NC). Cox sells the tags as adhesive labels or in strips such as those used by Murphy, NC-based Top of the Mountain Trout.

Each strip used by Top of the Mountain Trout includes three raised "indicator dots." Each dot contains a small amount of two food-grade liquid chemicals, each kept separate from the other. One is an enzyme that combines a lipase and pH indicating dye compound. The second chemical is considered proprietary. It contains a suspension containing primarily triglycerides.

The trout, like virtually any perishable, is temperature-sensitive. Using data based on scientific research concerning the trout's thermal characteristics, the trout's "energy of activation" factor is determined. The faster the product degrades, the higher its "EA" factor. The Vitsab technology takes that factor, plus a "Q10" value (that indicates the rate of change of degradation at 10° intervals), and through a sophisticated formula, determines a concentration appropriate for the trout.

For Top of the Mountain Trout, temperatures above 38°F accelerate spoilage of the fish. The higher the temperature that the fish is subjected to, the sooner the dots will change colors. If the trout is kept at the ideal temperature, it will remain fresh for 28 days.

The TTI tags custom-made for Top of the Mountain Trout include three dots. When all the dots are green in color, the trout is considered completely fresh, with maximum "shelf life." When the first dot, numbered "one" on the strip, changes from green to yellow, it still maintains good freshness. Under ideal temperature, the first dot will change color after seven days. The second dot changes after 14, indicating there's been some quality degredation, but it is still usable. Once the third dot changes color, after 28 days when the trout is maintained at 38°F, the product must be used quickly or discarded.

George Hertzschuch, who owns Top of the Mountain Trout, says the 28-day span is conservative and that the fish is still good for several days after that. According to Cox, the indicator dots are available in time durations from one to 120 days. Customers specify chemical concentrations according to their product's perishability.

The TTI tags must be activated in order to work. When Top of the Mountain Trout receives the strips, the dots appear white in color through their clear window. At this point they are inactive. When he prepares a shipment, Hertzschuch activates the dots by squeezing them until a barrier between the two chemicals breaks, causing the chemicals to mix. The mix appears green in color through the dot's clear window, indicating that the TTI tags are active.

Hertzschuch buys fresh trout from a nearby farm. He smokes the fish at temperatures of about 170°F for 15 to 20 minutes during the eight-hour process. "They're not like jerky, but they are well-preserved," he says. "And then in shipping, the fish has to stay at 38 degrees. When I pack fish, I add in frozen gel packs to maintain the temperature."

Typically, Hertzschuch puts each fish into a low-density polyethylene bag, then tapes closed the end of the bag. Bags are overwrapped in what he refers to as an absorption pad, which helps prevent moisture from gel packs from reaching the fish. He places the pad of bagged fish into a 1"-thick, white EPS shipper from Tech Pak (Peabody, MA). Then he randomly adds the frozen gel packs and EPS peanuts for dunnage before taping shut the EPS shipper.

Hertzschuch hand-applies a pressure-sensitive label to the outside of the EPS shipper. An ink-jet printer linked to a personal computer prints "fresh fish-keep refrigerated at 38°F or colder" onto the label. The EPS container is then placed into an outer corrugated case for shipment. "It's entirely a hand-packing process," Hertzschuch says, admitting, "my packaging is rather basic."

But customers aren't terribly concerned about the sophistication of the packaging process. What they want is top-quality trout to serve to their clientele. "The tags are for the convenience of customers, mainly chefs and preparation people in restaurants," says Hertzschuch. "These people can look at the tag and know the order's age because I write the shipping date on the tag strip."

Louie's Backyard takes the smoked fish out of the EPS cooler, placing them on a stainless-steel tray that is stored in a refrigerated cooler. "We keep the strips with the fish in the tray," explains Pat Tenney, one of the restaurant's owners. "Top of the Mountain is unique in that they supply this tag in their shipping container, which acts like a little cooler.

"We order between 12 and 25 pounds of the fish per week, depending on the season," she says. "Usually we use the fish quickly, but the indicator dots on the strips are beneficial. If the third dot changed color, we know we'd have to use the fish in the next few days. We've been using fish from Top of the Mountain for the better part of a year, and we've had no problems with the product. The strip has helped us know how long we've had the fish."

Tenney says she believes the strips would be especially effective for retailers, where the product may stay in the refrigerated case longer than it does in a restaurant cooler. Hertzschuch, however, sells the smoked fish to only one retail account, also in Key West.

At Charlie Trotter's restaurant, about 10 lb of smoked trout are used every week. "Top of the Mountain is one of our purveyors of fish, and they're unusual in that they provide the time/temperature tags with their shipments," says Matt Merges, chef de cuisine. The restaurant, however, doesn't take complete advantage of the tags.

"If even one of the dots changes colors, we don't serve it to our customers," he says. "But we tend to use the fish fairly quickly, so it won't sit around here long enough for the tags to turn color."

Hertzschuch believes the TTI tags help develop satisfied customers. "The customers I've asked believe the Vitsab tags are a good idea. In fact, they wonder why they're not used on shipments of poultry or ground beef from other suppliers."

Besides the tag's role in food safety, using it also makes sense economically. Hertzschuch believes it's a wise investment for the trout, which he sells for around $6.50/lb. "The tags cost me about 48 to 50 cents a piece, so it's not a huge investment. For the money they cost, I believe these tags are innovative.

"The tags afford me some peace of mind and show customers that I'm willing to go that extra yard to ensure they're receiving a good, safe product."