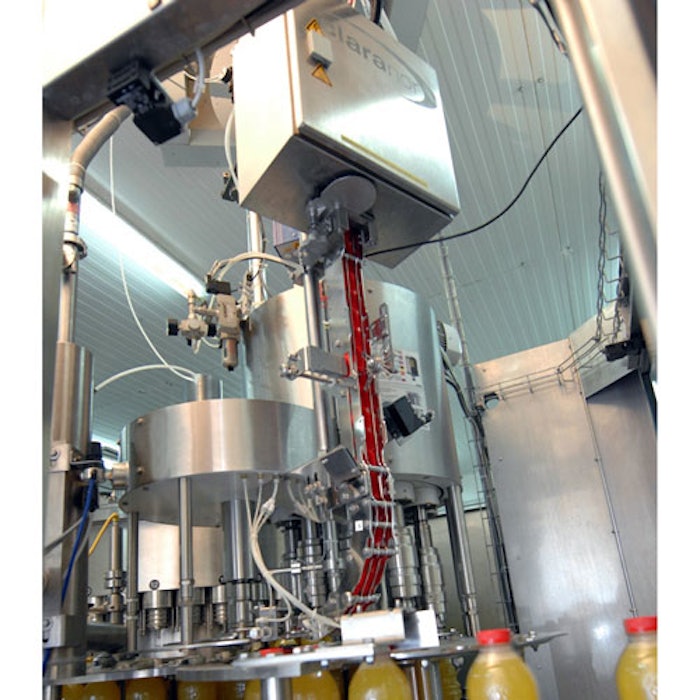 Until now, juices, flavored waters, extended shelf-life milk and other dairy-based drinks required caps to be sanitized using corrosive chemicals such as hydrogen peroxide or other peroxide based chemicals. Not only do these chemical systems increase the footprint and operational cost of the filling and capping line, but they also increase the plant’s water footprint both incoming and effluent. “The Claranor pulsed light system does away with the chemicals and rinse water in favor of a compact, long life, and energy efficient system that is as effective in sanitizing caps as the chemical systems it replaces,” says Don Cotney, President and General Manager, Fowler Products. “This new and innovative system utilizes an intense pulse of full spectrum light emitted from a xenon lamp, which destroys microbes through the photochemical effect of the UV spectrum and the photothermal effect of the visible spectrum.”

Cotney adds that using Claranor pulsed light for sanitizing caps is tremendously more effective than systems based upon continuous UV light. In a challenge test with Aspergillus niger, spray inoculated at 5.3 105 CFU per object, one flash of the Claranor pulsed light system resulted in a 5.1 log reduction and total decontamination after two flashes. Each Claranor light pulse lasts only three tenths of a millisecond so the cap material itself does not absorb heat. The system can treat up to 25 caps per second with throughput varying by size and configuration of cap. The Claranor system is ideal for flat caps, sports caps, five gallon caps, and caps with aluminum foil. Cotney says that while Claranor pulsed light sanitizing will be applied mostly to new capping machine installations, some packaging operations with sustainability, workplace safety, or environmental concerns will opt for a retrofit to replace their existing chemical based cap sanitizing systems. Claranor units require less floor space than chemical sanitizers. The cost of electricity to run the system is less than the amount companies spend on chemicals. Water costs will be reduced as well. The pencil-sized bulb is guaranteed for 10 million flashes – enough to treat up to 500 million caps.