A four-axis wrapping machine becomes easier to build, install, and troubleshoot now that mechanical components have been replaced by servo-based alternatives. 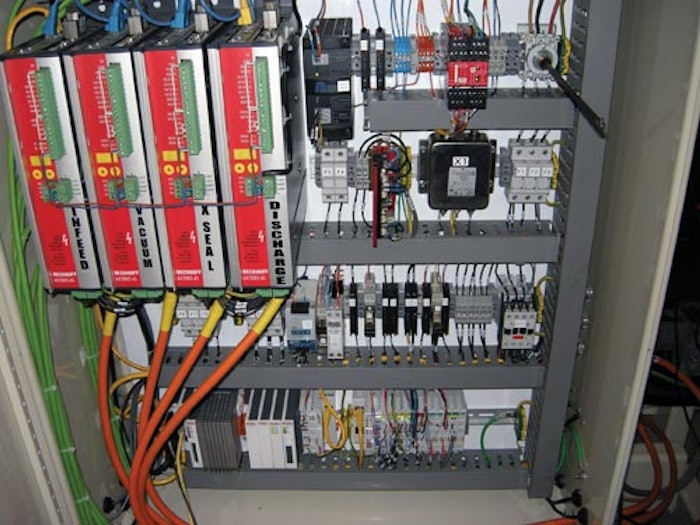 Servo look. Servo technology, much of it represented in this control cabinet, simplifies machine building and installation.

Gears, timing belts, and additional mechanical hardware that manages the relationship between shafts and other machine parts are beginning to give way to servo-based technology at Belco, a manufacturer of flow-wrapping and shrink-packaging machinery.

The firm’s Merlin flow wrapper, which has long been available in an Adjustable Mechanical version featuring hand-wheel adjustments for product length and spacing, has been joined by a model called the Merlin Servo. It features a Beckhoff embedded PC system CX1020, TwinCAT software, EtherCAT industrial Ethernet as the fieldbus protocol, and Beckhoff motors and drives that handle four axes of motion. Capable of speeds to 120/min, the Merlin Servo applies heat shrink films to a range of products from DVDs to stacks of printed blanks used to form paperboard ice cream containers.

According to Belco president Mike Misik, the idea was to keep the Adjustable Mechanical version available and to position it as a “low-cost” alternative to the more advanced Merlin Servo. This strategy was based on the presupposition that the components required to build a servo-based machine would be so much more costly than those needed in the Adjustable Mechanical Merlin that the selling price of the servo machine would have to be marked up.

It turned out Belco was right about the servo components. They were indeed more costly up front, though not nearly as much as had originally been anticipated. More significant, however, is that assembling and building the new servo-based Merlin requires considerably less time and labor. “You don’t have to contend with all the mechanical linkages,” says Misik. “You install the servo motors and you’re done. Installation at the customer plant is easier, too. Rather than making adjustments mechanically, you make most of them at an HMI screen.”

“We had a customer come in for a factory acceptance test, and they brought in people from their Production, Engineering, and Maintenance groups. What they had forgotten about was someone from Safety, and when Safety later saw a video of the machine operating, they wanted some modifications made. Everything they needed we did through the controls platform. In the old days, instead of a few hours of programming, it might have required a couple of days remanufacturing, remaking, and rewiring.”

Misik also says he’s become a big fan of the single-source approach when it comes to building servo-based equipment.

“In other machines we’ve built we used some Beckhoff components mixed with components from other suppliers. But with this Merlin machine, by using 100 percent Beckhoff controls we have no interface issues to deal with. Their products are reliable and bullet-proof, and they don’t require the additional programming that is sometimes necessary if you are going from one brand to another. When everything communicates right out of the box that way, it takes quite a bit of time-consuming labor and troubleshooting out of the picture.”