Technical advances in RFID at hand

New advances in RFID include long-range HF tags, devices that work well with challenging substances, and tags that are sterilization tolerant.

Peter Harrop
Dec 31, 2005
Surface Acoustic Wave (SAW) chips are an alternative to silicon chips in RFID tags. These have no threshold voltage (the power a

It is usually expected that reading RFID at more than one meter (3') range is impossible under the radio regulations of most countries other than at UHF, a band of license-free frequencies around 900 MHz. True, longer ranges have always been available if there is a battery in the RFID tag, and this is a viable solution for vehicles and trailers. However, these so-called active tags have limited life and they are expensive, relatively large, and with more parts to go wrong. This is why UHF passive tags have been standardized for pallets and cases of foods and other products at leading United States and European retailers as well as the U.S. military.

UHF RFID not ideal for all food applications

Although UHF RFID works reasonably well with nothing in its way, it can behave very unpredictably when water or metal is nearby, let alone in the way. As German retailer Metro has found for tagging of food products, sometimes the proximity of water or metal can prevent reads. At other times, things can be unexpectedly and annoyingly sensed 50 meters away, creating confusion about what is being sensed.

In Europe, the problems of UHF are compounded by the military and other vested interests preventing UHF radio regulations that permit higher power and wider bandwidth. This stance is greatly restricting range, and creating problems with interference between readers in trials of pallet and case tagging of food. Improvements to UHF systems are coming, but there is also help in prospect from great advances recently in the traditional HF (13.56MHz) and microwave (2.45GHz) systems making longer ranges more suitable for traceability applications.

* Password-protected HF tags have a controllable (shorter) range and are more tolerant of water and metal than UHF tags. Major retailers demand password-protected read/write tags and these had only been available at UHF where EPCglobal standards are involved.

* New ways of extending the range of HF RFID, sometimes even to ten meters (30').

* Use of Surface Acoustic Wave (SAW) chips to replace the silicon chips in RFID tags. These have no threshold voltage (the power at which they turn on), they can sense temperature without additional sensors, and they are inherently simpler to make.

As one example, Texas Instruments has just released a password-protected, standards-compliant write mechanism for HF tag data. It has also introduced a rigorous quality control inlay-manufacturing process, and offered a unique solution for pharmaceutical tagging that will be relevant to food.

This helps to tackle another aspect of the pharmaceutical supply chain: privacy. In stark contrast to retail and consumer packaged goods, pharma players have reached a consensus that drug tags should not be deactivated ("killed") upon purchase by the consumer.

Indeed, along with drug companies, Nestle and other food companies have said that a kill feature is neither viable nor necessary. One of the key potential benefits of drug tagging is vastly improved recall processes, which would require returned drug bottles to have retained identification information on their tags. The problem, of course, is that not killing a tag leaves the consumer vulnerable to privacy invasion. Drug prescriptions can be highly sensitive personal information, and consumers would be loathe to accept the possibility of a hacker "skimming" the names of drugs located in their shopping bags as they leave the pharmacy.

Furthermore, in the event of a recall, the consumer could return the tagged bottle to the pharmacy, where the serial number would be entered into the system and reassociated with its product information to determine if it is in fact part of the recall.

Eventually, item-level tagging of food in the supermarket will have to involve tags staying on after checkout and without being deactivated. IDTechEx finds that 30% of the potential benefits and payback at item level occur after the checkout; these include improved recalls, fraud reduction, and consumer rewards.

Icelandic Fisheries successfully tested HF for wet fish packed in cases and on pallets because UHF did not work and the range was only one meter with the usual credit card sized HF label. A longer range would have been welcome.

There are even those who argue that the total cost of ownership can be lower with an HF system working at, say two meters. For example, there are no large royalties to pay—contrary to the situation at UHF—and ten times as many HF tags have been made, giving economies of scale, though the volume story is changing fast in favor of UHF.

Many ways of achieving longer range at HF

There are many new ways of achieving longer range at HF without necessarily having very large tags and readers.

Metro, one of the world’s largest supermarket chains, wants to tag at item level using one frequency and one standard system if possible. For short-range smart shelving, HF seems best because at short range it permits the smallest tag, the range is controllable, and there is no problem distinguishing one item from another.

With its greater range, a UHF system may be reading the wrong item, or the tag can be too big for small food items.

The Metro approach for large items is not to make the HF tag enormous, but to use large interrogatory antennas rather like the anti-theft tag pedestals in stores. Maruetsu in Japan has had a similar approach with numerous trials in their food stores at HF.

However, these “large antenna” solutions are greedy of production capacity. Another approach is also therefore interesting. For example, a French company DAG System, the electronic branch of the Pygmalyon company, holds several related patents and has manufactured RFID systems since 1998. It has developed a unique technology of “unconstrained” detection in the band 13.56 MHz for which they claim long-distance detection of up to 10 meters (30').

That's unlike UHF, which usually approximates to a beam, often with blind spots. With antennas able to detect tags within a 60 cubic meter volume, this technology was first developed and sold for sports events. For example, it was used in the Rome Marathon. The current DAG tag for many meters range is rather large, but other companies have developed so-called fractal antennas to reduce the size of such tags for a given range. None of these tags have problems with the water often associated with foods.

Surface Acoustic Wave (SAW) RFID has been around for some time, benefiting from reliability and cost reduction that comes from the billions of non-RFID SAW applications in mobile phones, pagers and so on. SAW RFID first appeared in nonstop road tolling in California and Norway, but numbers were small and, in California, they were replaced by silicon chip based RFID tags in the car windshield.

In Norway, MicroDesign continued for over a decade supplying read-only passive versions. Since then it has traded as QFree selling silicon chip based active read/write devices and systems for non-stop road tolling and other equipment. Indeed, to this day, no one knows how to make SAW RFID that is active or read/write, though RFSAW of Dallas has done some excellent work showing how it can sense strain or temperatures without extra sensors and even provide positioning data. Both functions are possible with silicon chips and separate sensors but only at considerable cost.

However, although a SAW RFID disadvantage is that it still employs a brittle chip like silicon, at least the processing steps are fewer and require less precision in manufacturing, giving the promise—not yet realized in the marketplace—of lower cost than silicon-chip based RFID. RFSAW has established sales of SAW RFID devices into many industries, and it has also been prime mover in creating a subset of ISO 18000 to cover such devices.

In many applications, SAW tag read range is sufficiently large so that passive tags can replace high-cost battery-powered active tags. SAW-based RFID systems have the inherent ability to measure tag position, direction of travel, and tag temperature, which are costly or difficult to implement with competing technologies. Also, SAW tags can withstand security and safety related processes that involve elevated operating temperatures, high energy x-rays, or gamma ray sterilization as is used with some food and medical supplies.

For example, the RFSAW tag uses an inherently lower-cost chip in combination with a smaller, less costly tag antenna, which results in a cost advantage over competing silicon-based tags. In addition, overall system cost is optimized by placing key signal processing functions such as multitag reading in the reader unit instead of the tag. It is enabled by multiple-access, spread-spectrum signaling that provides the necessary high-speed reading with substantially higher interference resistance and spectrum compatibility with other radio frequency systems and RFID readers.

Unlike UHF, it can operate legally anywhere worldwide today, so there's no need to await European, Chinese and other radio regulation reviews. And 256-bit versions are possible, far more than the memory demanded for item level, pallet and case tagging, let alone other conveyances and vehicles.

These activities have led giant Samsung of Korea to announce that it had a program to develop SAW chipless RFID, apparently to get costs down against silicon-chip RFID. conventional RFID costs are going to be about 12¢ per tag in the highest volumes in 2006 for EPC Gen2, still unacceptable for most item-level tagging. Thoronics of Germany has created a SAW design house for custom design of SAW RFID tags. Carinthian Tech Research (CTR) of Austria, has recently developed new passive RFID tags able to tolerate and monitor temperatures in engineering and industrial applications rather than the high-volume, low-cost applications made possible by RFSAW.

Clearly the advances in RFID relevant to food and livestock traceability are coming thick and fast. The major conference, Food Traceability, in Dallas, February 1-2, offers Hitachi detailing use of Microwave RFID for food tagging in East Asia and local company RFSAW presenting on SAW tags for food. There will be presentations from across the world on all aspects of RFID tagging of food use of DNA, temperature-dependent bar codes and other exciting new technologies for these purposes.

Also located in Dallas are Texas Instruments and Maxim Dallas Semiconductors, which is shortly launching a time-temperature recording RFID label for food.

IDTechEx can make appropriate introductions so a visit to the Dallas area can be particularly fruitful. For more information, see Tracking Food.

Peter Harrop, PhD, is chairman of IDTechEx, and a leading authority on smart packaging including RFID technologies. 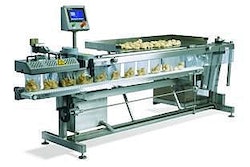