As research at Michigan State University shows, frequency, distances and angles, type of tag, location and orientation, influences of moisture and metals, and pallet patterns all play a part in readability. 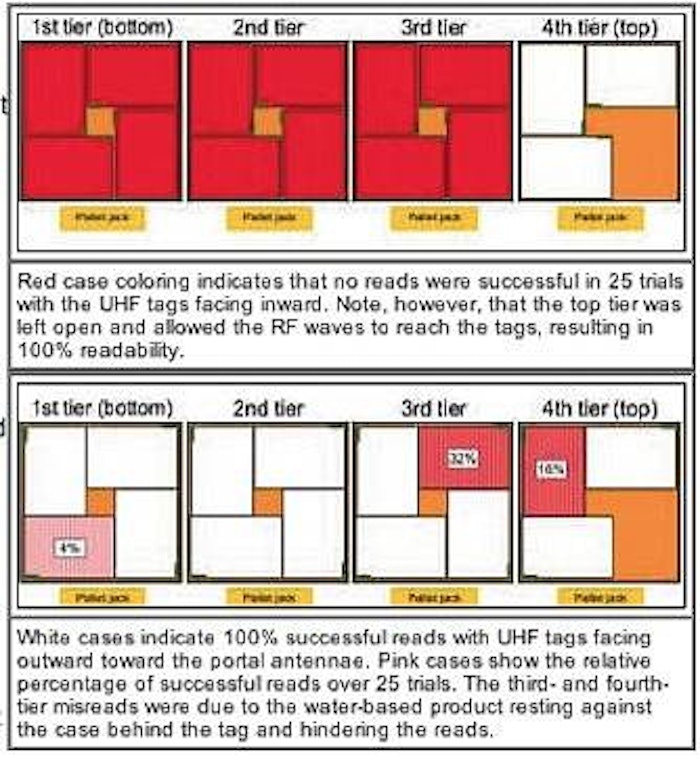 The following article, featured in the January/February 2005 issue of RFID Product News, is authored by Dr. Robb Clarke, a contributing editor.

The goal of any enabling automatic identification technology is to obtain data that can be converted into information without the need for human input during the transaction. If this occurs, the technology has an opportunity to become a dependable tool for the business. If this doesn't occur, the technology may not stay around long enough to develop into a real tool. It's funny how this thought process applies to many things, but RFID is generally not one of them.

There are so many variables affecting readability that the faint of heart are likely to quit before success can be found. In its brief history, distribution success with RFID has been challenged early and often. Perhaps the latest promise of Gen 2 protocols and compliant equipment will alleviate some of the difficulties when the tags and readers finally are available to everyone who wants them.

But I believe that new twists on the application of physics will be needed for problem-free implementation. Since the industry must deal with what is currently available, the remainder of this article will address some of the issues that the Michigan State University (MSU) RFID Lab has found that affect readability.

In a nutshell, the following list covers most of the problem areas for RFID: frequency, distances and angles, type of tag, location and orientation, influences of moisture and metals, and pallet patterns.

In spite of the "global" focus for using UHF, there are many applications for other frequencies that are both intelligent and economical. People should keep in mind that a closed-loop system for internal purposes does not require UHF tagging.

There is nothing magical about UHF. It has its benefits along with its detriments. If you do have a choice for an application, you'd be remiss in not examining this issue from all sides.

One of the real strengths of passive UHF is distance. There are real benefits to be gained from this, but only if read rates are not compromised. Keep in mind that there is no standard distance for accurate reads, although there are required minimums given in some mandates. Obviously, the farther a read can take place from the tagged load, the better.

But with distance comes a drop in energy levels, and the chances for misreads thus increase dramatically. This is exacerbated by other factors, including material type and ability to hold moisture, product type, and package and pallet orientation, among others.

Currently, the angles of the reads are limited knowledge for the masses. People in RFID labs know that the angle of a read can impact the success rate, but they may not always know why. The angle of a read can affect success through having a non-uniform read field. Moving the tag upward or downward in the read field could change the amount of available energy for stimulating the response.

In a UHF read field, nonsymmetry is often a consequence of having interference affect the propagated signal. For example, there could be electromagnetic interference from electric motors or power lines that changes the read field dynamics. This can be difficult to detect, especially when the interference is random in nature.

Similarly, read field dynamics can be affected by hidden structural elements, such as the amount of rebar or wiring placed in the floors or walls of a building.

With currently installed UHF systems, readability can be significantly affected by tag orientation and tag location relative to the reader (or portal) antennae locations.

Yes, some tags are available that claim placement and orientation are not an issue, but testing at MSU finds that most tags have some degree of orientation and location impact.

Some are quite severe enough that they should be avoided in public distribution channels, while others show minimal impact, and will operate in most environments. These issues play a significant role in successful reads, but are often overlooked in the quest to find the cheapest alternative rather than the one that works best.

This becomes doubly important when product composition and the packaging materials are included in the mix. I realize this is subjective with respect to the product and pallet loads being shipped, but a focus on price reminds me of a double-edged slogan from an old marketing class: Free, and Darn Well Worth It.

Whether a tag/reader combination works correctly is largely a function of the set-up for data collection (with a heavy reliance on antennae locations and orientations). Where there is a defined process, such as the tearing down of pallet loads and individual reads of case-level items on a conveyor system, the focus of tag location and orientation is somewhat mitigated, and successful reads often can be obtained. However, even with this controlled environment, there is no guarantee of operability or readability. There are numerous types of product-package systems that present major problems for RFID data collection, even after extensive work with major retailers and their incoming product-handling systems. Remember that these controlled conditions represent the best possible scenarios for readability, and they only get worse as reading points become less controlled, or as data collections are attempted with larger quantities per read.

Interestingly, if the environment can be controlled, it may be possible to read further distances and collect more data than from within an open environment. After all, reflections of radio waves can work for you as well as they work against you. Control the environment and you can better control the readability of RFID systems. Granted, this is not always possible in a fast-paced business process. But one of the things about RFID that is becoming clearer is that it can give you the information you need to evaluate your processes and consider paradigm shifts in how your business operates.

A simple example is changing pallet patterns or case size to better utilize RFID data collection. However, even this is a dramatic shift for most producers and manufacturers. Yet it points out the requirement to evaluate RFID as a tool for optimizing supply chain performance, though ease and cost will not be top, short-term justifications.

From a supply chain or marketing view, this is really exciting stuff. From a packaging and warehousing view, it is both exciting and a pain in the rump. From a finance view, it could well be a disaster. It is little wonder that most major suppliers have yet to spend the amount of money on RFID that analysts predicted would be necessary to successfully enact this technology.

Dr. Robb Clarke is an associate professor at the Michigan State University (MSU) School of Packaging, located in East Lansing, MI. An internationally renowned speaker and RFID expert, Clarke created MSU's RFID Lab, which he oversees. His main areas of research are automatic identification (particularly RFID) in manufacturing, warehousing, distribution, and handling; machine operations and efficiency; quality control and issues; and dynamic forces encountered on packaging lines and in distribution. Clarke holds a BS degree from the MSU School of Packaging, an MBA in marketing from Golden Gate University, a PhD in Engineering Management from the University of Missouri-Rolla, and a Visiting Scholar research position in Engineering Science at the University of Oxford, England.