What if a delta-style robot for high-speed pick-and-place packaging operations could be built for roughly half the cost of those currently available? See video

That was among the questions posed by Festo representatives December 4 at a full-day press gathering held in Festo's new technical center in Stuttgart, Germany.

The question is more than a rhetorical one, too. Festo is making its Tripod unit available to any who are interested.

And why is this system so much less costly than currently available robots that are similarly built? Because those rely on electronic drives, while the Festo system relies instead on three rodless pneumatic drives. Each is controlled individually, but the motions of the three are tightly coordinated by Festo software so that the system's pneumatic end effector can pick and place efficiently and accurately.

Festo says its Tripod unit is just as fast as any of the delta robots currently available, but the firm readily admits that, compared to a delta robot with electronic drives, the pneumatically driven robot is not as accurate. That's because a system actuated by compressed air is inherently less precise than one actuated by a drive and motor. But some packaging applications don't require absolute perfection in placement accuracy, and it's these applications for which the Tripod system was designed. 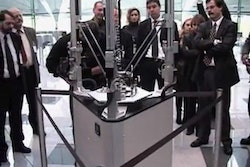 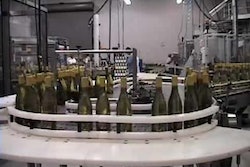