A recent switch from radio-frequency sealing of clear, two-piece, polyvinyl chloride blisters to ultra-violet sealing has brought badly needed flexibility to Pentel of America, a Torrance, CA, maker of pens. 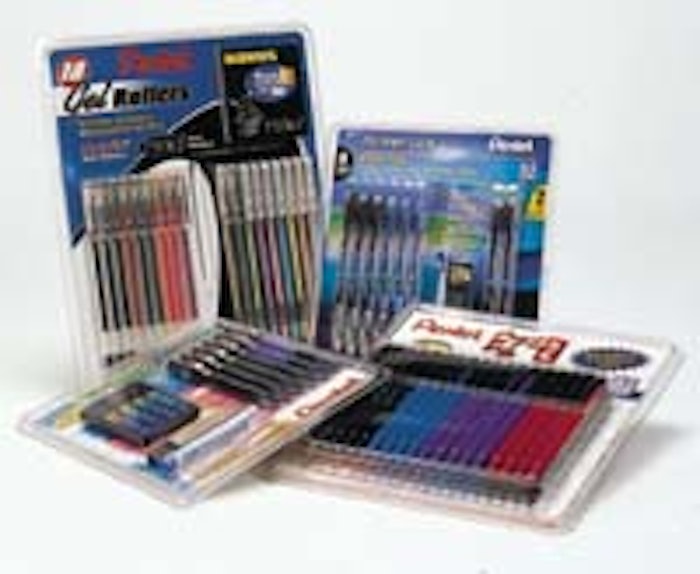 Sealed on the UV system are large packages Pentel sells through club stores.

So every time we changed to a new package shape, we had to spend time replacing the tooling.”

The ultraviolet sealing system now running at Pentel (and at a handful of its contract packagers) is the Simpl-Seal® system from Partner Pak (Huntington Beach, CA). Operators send the packages through the sealing machine on a belt conveyor. First, the required number of pens is loaded into the front half of the two-piece package. The pens are followed by a paperboard insert card and then the back half of the package. Before the back half is applied, a bead of Simpl-Seal UV adhesive is applied to its perimeter. Inside the UV tunnel, the adhesive cures instantly and bonds the front and back PVC pieces together. Packages are opened with a scissors.

According to Koch, UV sealing has doubled packaging speeds compared to the R-F system that has been replaced. Speed is now limited only by the speed of the conveyor belt that carries the packages through the tunnel and by the number of operators assigned to the line.

But from Koch’s standpoint, the increased flexibility gained since the switch to the Simpl-Seal process is what really matters. “It’s just a conveyor through a UV light source,” says Koch. “I could send consecutive packages having completely different configurations and it would seal them fine.”