"But at the same time," says John Bitner, manager of package design and development, "we pass the senior adult protocol for ease of opening."

The PVC is thermoformed with five cavities per pack to hold the tablets. What's unusual is that the lidding and PVC are perforated in a circle/starburst pattern. To use, this circle in the pack's center is pushed through from the PVC side, forming five triangular tabs as the perfs break. These tabs are peeled away, taking the paper and polyester along and exposing the foil covering the tablet. All that remains is to push the tablet through the foil.

The concept required two sets of perforations registered to one another--one in the lidding prior to heat-sealing and then, after heat-sealing, one that cuts through the PVC and the lidding. Trouble was, the blister sealer wasn't able to hold the perfs in the PVC in register with the perfs in the lidding. To further complicate matters, both perforations must be in register with the preprinted copy.

Reynolds stepped in by pre-perfing the lidding in-line on its narrow-web gravure press, which it claims has never been done before. It modified a station on the press to perforate instead of print, all in register to eye-marks in the margin of the lidding. Searle's blister machine then heat-seals the lidding to the PVC and picks up the eye-marks to make its perforations in the finished package. The two perforations line up, permitting the CR concept to work. 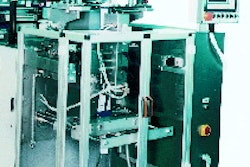 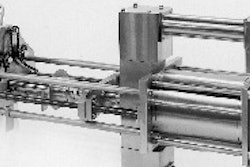