Chilled fruit leader UniMark Foods of Argyle, TX, is well known in supermarkets nationwide for its 26-oz portions of tropical fruits in glass jars sold on ice in the produce department.

Now the firm is rolling out a three-item line of 46-oz melon salads in polyvinyl chloride jars. Marketed under the Sunfresh(TM) brand, the fruit is cut fresh and jarred with a syrup base that incorporates some combination of preservatives, including ascorbic acid, sodium benzoate, and citric acid. The shatter-resistance of PVC was its chief appeal, particularly with the large 46-oz format, says senior vice president Jeff King in explaining the choice of packaging material. He adds that polyethylene terephthalate was a candidate, too, but PVC won out because UniMark figures it's about 20% less costly. King admits that PET would probably provide a longer shelf life, but UniMark is positioning the melon salads as a relatively quick-turn item with a shelf life of 30 days. They'll be taken by common carrier through the refrigerated warehouses of retailer customers and then out to individual stores. Richards Packaging (Toronto, Ontario, Canada) supplies the extrusion blown widemouth jar for UniMark as well as the 89-mm closure with induction sealed foil liner. Jars are decorated with a pressure-sensitive film label printed flexo in up to seven colors by Houston Tape and Label (Houston, TX). While UniMark's tropical fruit in glass jars is displayed in supermarket produce departments on crushed ice, the melon salads will appear in the dairy section, where refrigerated cabinets provide chilling. The melon is extremely sensitive to spoilage caused by temperature abuse, and UniMark feels the refrigerated cases will prove more reliable than crushed ice in the produce department. Suggested retail price for the 46-oz portions is about $4.99. 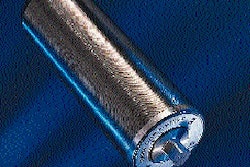 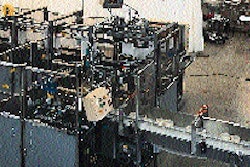 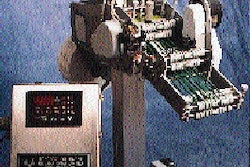