Once The GFB had established that its hybrid paper/paperboard package was a hit with consumers, an automated rotary bagger became an absolute must.

Dedicated to gluten-free bars, bites, and other gluten-free products and in business now for a decade, The GFB of Grand Rapids, Mich., may be something of a new kid on the block. And with about 50 people on the payroll, it’s not exactly a food-making juggernaut. But one thing the firm’s management is not afraid of is innovative packaging and new equipment to fill it.

Exhibit A is the collapsible cup that The GFB (acronym for Gluten-Free Bar) uses for its gluten-free oatmeal. This format is an alternative to round cups with flexible film lidding commonly used in this category of products. Such cups are certainly functional enough, but from any sort of cube or space utilization perspective, they’re a bit suboptimal. Not only because a round package doesn’t cube out well, but also because the container needs to be designed with a considerable amount of head space between the dry product and the lid. Inherent in such a design is the need to ship a lot of air.

These shortcomings are neatly addressed by the cup used by The GFB because it’s collapsible. This makes it uniquely suitable for on-the-go consumers who crave portability and convenience. Consumers can easily tuck the slim pack in a purse or brief case. When it’s time for breakfast, just pinch the left and right sides toward the middle and, thanks to clever scoring and die cutting, the paper package turns itself into a squared-off bowl. Just add hot water and stir. Microwaving isn’t really necessary, but for those who prefer oatmeal that’s really hot, instructions for microwaving are included on the package.

Essentially a hybrid package consisting of one flexible material (paper) and one rigid material (paperboard), this collapsible cup comes from Graphic Packaging International. It was born out of GPI’s IntegraFlex™ technology, a broad hybrid platform where the common denominator is finding ways to marry the advantages of flexible packaging materials with those of more rigid packaging materials.

Until now, GPI has produced these unique packages in an R&D facility. But the firm is now in the process of finalizing a decision on which of its converting plants will house what might be called an IntegraFlex Version 3.0 machine. Unlike the beta units currently in operation, this next-generation equipment will crank out these hybrid packages in true commercial quantities.

Fundamentally, the converting process consists of printing and coating roll-fed paper and then sending it through a slitter/rewinder. Next, the paper and individual 18-point SUS paperboard blanks with offset printing are joined by adhesive in a purpose-built IntegraFlex machine. In the case of the package used by The GFB, the paper is a 25-lb weight with an unnamed coating for barrier purposes.

According to Andy Morgan, Vice President of Operations at The GFB, the collapsible cup has been in use ever since oatmeal was added to the firm’s product mix more than three years ago. At the outset, filling was an entirely manual operation. Then about 18 months ago, a semiautomatic system was put in place. “Sales were increasing,” says Morgan, “and it quickly became evident that using as many as seven people to fill 10 packages a minute was not going to do.”

As luck would have it, The GFB had just recently installed an automated filling system for pre-made pouches of its gluten-free bites. Purchased from PPi Technologies, the PSG LEE machine was a big hit. “We basically plugged it in and started producing packages,” says Morgan. “So we said to PPi, how do you feel about filling this collapsible oatmeal package? And within about four weeks they came back with a solution I felt really good about. It was partly an off-the-shelf rotary system with two volumetric fillers on it, one for the coarse material and one for the ‘fines’—sugar, cinnamon, salt. But it had to have a few key elements of customization that were required by this particular package. Most important was a pneumatic mechanism that would push the bottom up so that the package fits better in its corrugated secondary packaging. That’s probably the most unique thing about the whole system.” Watch a video of the machine at pwgo.to/6097.

Packages are fed into the intermittent-motion PSG LEE RT-110 Rotary Bagger from a magazine. A vacuum pickup device picks one bag at a time and hands it off to one of 10 mechanical grippers mounted on a central rotary carousel. These grippers move through a series of stations that are responsible for first making sure that the top of the package is wide open and then positioning the package over a Videojet ink-jet coder that imprints lot and date code on the bottom of each package. In subsequent stations, pouches pause beneath the two volumetric fillers that deposit product—first the coarse and then the fines—into the package. Filled packages eventually move through a heat-sealing station and then a cooling station before dropping onto a discharge chute.

Secondary packaging, done manually for now, consists of an E-flute corrugated retail-ready tray that holds six primary packs. Eight of these six-count display trays are then placed in a corrugated shipper that is taped closed.

In addition to distributing through supermarkets, pharmacies, and natural food stores, The GFB does a brisk online business, where a case of six oatmeal packs sells for $15. As for the new PSG Lee Rotary Bagger, Morgan says it’s been every bit as reliable as the one installed for the flexible film stand-up pouches. He also believes it will present opportunities for other product/package combinations. 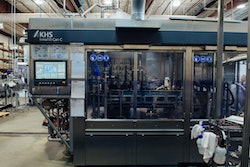