Sausage chubs are a challenge to handle 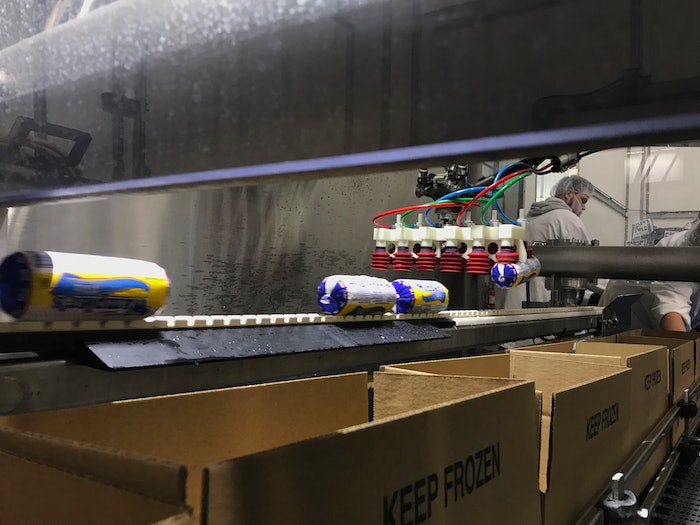 The three-axis Delta robot picks up each chub individually with its vacuum grippers, until there are six chubs on the EOAT.

How do you handle a wet, 1-lb cylindrical brick of fresh sausage in retail packaging with automated equipment? That was the challenge Wampler’s Farm Sausage of Lenoir City, TN, sought to address when it ventured into robotics.

Wampler’s is a family-owned business founded 75 years ago by Riley Wampler, who began by selling fresh pork products door to door. Today, Riley Wampler’s grandson, Ted Wampler Jr., runs the company, which has grown to encompass 15 acres of land and employs 170 individuals. Among its products are sausage patties, chubs, links, brats, skinless links, bulk sausage, pork burgers, loins, ribs, and pork cutlets, sold to retail and foodservice customers under its own and private-label brands.

According to Project Engineer Ted (“Trae”) Wampler III, “Wampler’s began considering robotics when they became precise, reliable, quick, and cheap enough to compete with the more conventional methods of automation being used inside the facility.”

Wampler’s goal was to automate the transfer of chilled, 1-lb sausage chubs into corrugated cases. Case packing of chub packs had always been a manual hand-load process. Due to the shape and size variance of the chub, automating the task was a challenge.

Among Wampler’s requirements for the robot was that it needed to be able to handle all the various private-label products Wampler’s packs, as well as its own brand flavors. Explains Wampler, it also wanted to increase the speed of packing while reducing the cost of labor, explains Trae Wampler.

The solution—installed in Q1-2016—was the JLS Osprey Automatic Chub Loader from JLS Automation, which has been engineered with the JLS Osprey robotic case packer as a base, with special modifications and tooling added to develop the chub loader. The system is equipped with an ABB IRB 360 FlexPicker three-axis Delta robot, which features a high-sanitation stainless-steel construction.

During operation of the line, the chubs pass single-file into the loading cell of the robot. The belt carrying the chubs is continuous, feeding product to the robot at rates to 120/min. Using an end-of-arm tool with six suction cups, the robot picks up each chub individually as it enters the cell. Once there are six chubs on the end effector, the robot places them into one of the cases running parallel to the chub line on an indexing conveyor. It then picks up six more, loading them into the same case, for 12 chubs/case total.

According to Wampler, among the advantages achieved with the JLS Osprey Automatic Chub Loader are increased speed and productivity, decreased labor costs, and increased efficiency. He adds, “The initial purchase was a high cost, but the payback makes sense, which still makes our purchase an attractive endeavor. We have no regrets.”

With the automation of the case-loading process, Wampler’s also used the opportunity to automate some of its adjoining pieces of equipment. Says Wampler, “Machines can do a great job of communicating with each other, and the result can be harmonious. I would venture to say that surrounding components should be integrated at the same time as the robotics.”

At Wampler’s, they added an automatic case erector from Wexxar, a Pro Mach brand, at the same time as the robot. Once cases are erected, they are conveyed from the outfeed of the case erector approximately 20 ft to the case-packing cell. A photoeye positioned halfway between the Wexxar and the robot signals the case erector when it needs to build more boxes. Says Wampler of the acquisition, “Not only did this save us from loading the boxes with chubs manually, but also from building the boxes manually in the first place.”

Now, operators need only load the case blanks from a pallet into the cartridge of the case erector. Says Wampler, “It has really simplified our end-of-line chub packaging and has also become the benchmark at our facility as we look to make similar advancements elsewhere.”

Watch a video of the JLS Osprey CL. 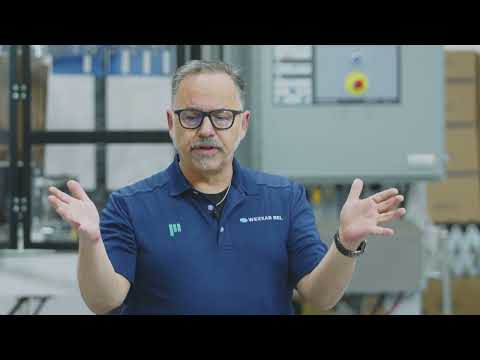