A sophisticated vision inspection system that provides nearly 130 profiles per cup at 600 cups/min is used for quality assurance in the commercial thermoforming of yogurt cups. 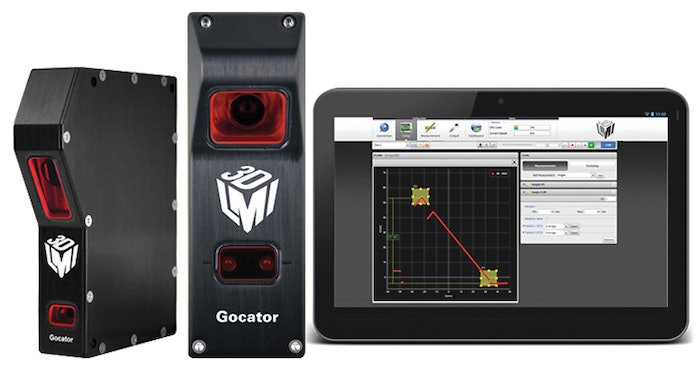 Designed and built by Industrial Control Services, the ThermoChecker inspects the rims of thermoformed yogurt cups for defects at a rate of up to 600 cups/min, making almost 130 measurements per cup.

The ThermoChecker is designed for commercial makers of yogurt cups. It gets installed on the dry offset printer such manufacturers use to decorate the cups. Why on the printer? “Because,” says ICS Sales Engineer Nate Hinkle, “that’s where the cups are singulated, which allows our system to inspect the cups one at a time and, if need be, reject them one at a time.”

A high-speed 3D vision system from LMI plays the central role in making it possible for the ThermoChecker to inspect so many cups so thoroughly. Called the 3D Smart Sensor Model Gocator 2330, this vision system has a resolution in the range of 6 to 12 microns, which means it’s able to detect the smallest defects. If cups having such defects go undetected and reach a customer’s plant, they can result in an imperfect seal between cup and lidding material, resulting in spoiled product.

“We reduce the Geocator’s field of view by about 90% and the resolution is halved,” says Hinkle. “So we’re looking at an area measuring only about 10 x 8 mm, which gives us the processing power needed and the ability to run the vision system about 10 times faster than if the field of view were not reduced.”

Other controls devices on the ThermoChecker include these:

• A five-port Ethernet switch from Turck. “There are five Ethernet devices on the ThermoChecker, and the five-port switch allows them to all communicate with each other,” says Hinkle.

• A touchscreen PC from AIS. It’s an HMI interface used to display and configure the Gocator built-in software, which runs in any browser.

• A Wago Model 750-881 PLC that takes an input signal from the printer to tell the Gocator when to start and stop. “The PLC also handles cup rejection logic,” adds Hinkle.

• A COSY 141 Industrial VPN Router from eWON. “This remote- access device is a neat part of the overall system,” says Hinkle. “Anywhere I have an Internet connection I can log into this system and view what the Wago PLC or the AIS PC is doing. It means we can troubleshoot from a remote location. Yes, we have to get the customer’s IT people involved so that an IP address can be assigned. And yes, IT was a little reluctant to open up such access. But advocates in customer plants push for it because they know that remote troubleshooting can save money on service calls. It’s a cloud-based service that creates a VPN tunnel that’s basically invisible to the IT guys. And it doesn’t provide access to the entire plant. Only to the five devices on that Turck Ethernet switch.”