A new $53 million facility near Parma, Italy, uses extensive quality controls from the field to the final package to ensure the most authentic Italian food experience.

Anne Marie Mohan
Barilla uses a 42-head rotary volumetric filler that normally runs at 400 bottles/min on each line. The fillers offer a valve system that provides maximum dosing accuracy with the least mechanical stress on the product.

High quality: That is the goal for most consumer packaged goods companies when manufacturing and producing their products. However, for Italian foods company Barilla Group, their commitment to high-quality product has been brought to whole new levels with the opening in July 2012 of a new sauce plant in Rubbiano di Solignano, near Parma, Italy. From raw materials through packaging, every step in the process has been engineered to result in the highest-quality product that most closely resembles homemade sauces made in the Italian tradition.

“We create the quality of the product step-by-step, both before and during production,” says Marco Sacchelli, Rubbiano Plant Director. “This is the real difference between us and our competitors.”

Until the opening of its new €40 million (approximately US$53 million) plant, Barilla relied on an external tomato supplier and co-packer to produce its sauces for the Italian market as well as for 100 other countries outside the U.S. As Sacchelli explains, by internalizing production of its sauces, Barilla now has more control over the quality of the product and a greater opportunity to expand its recipes and capacity.

“With the co-packer, we used only one line and one technology, and we adapted that to the specific recipe,” says Sacchelli. “When we built this plant, we dedicated two lines for the production of two different kinds of products. We also have the space for future development, and we will be able to acquire new equipment and technologies as they become available to help us produce the best-quality product.”

The facility’s two lines each include dedicated processing, filling, and packaging equipment, with one line producing tomato-based sauces, and the other, pesto. While the processing portion of the lines differs according to the sauces’ requirements, the packaging lines mirror one another, with equipment selected for minimal stress on the product and packaging, traceability for each jar on the line, and the reduction of water for sustainability purposes, among other things.

“The main driver of our technical solutions for packaging was soft handling of the jars to reduce the risk of breakage,” says Michele Amigoni, Group Supply Chain Packaging Design & Standards Director for Barilla.

Following the Italian food model
Fourth-generation family-owned Barilla was established in 1877 and today is one of the largest Italian food manufacturers in the world, producing pasta, ready-made sauces, bakery products, and crisp breads, distributed to more than 100 countries worldwide. Currently, Barilla operates 30 plants including five mills in nine countries. Every year, 1.5 million tons of product under 14 brand names leave its plants. Core to its business is the Italian food model, which “combines superior-quality ingredients with simple recipes, offering the five senses unique experiences,” reads its 2012 sustainable business report.

Barilla is headquartered in Parma, part of a region of Italy known as the Food Valley, renowned for its high-quality meats, pastas, and vegetables. “Around this tradition of food has also grown technologies for the production, transformation [process of turning tomatoes to pulp], and packaging of food,” explains Barilla Media and External Relations Manager Marina Morsellino.

Located near Parma, the new 15,000-sq-m (49,000-sq-ft) Barilla sauce plant is ideally situated to source the highest-quality tomatoes and basil in the Food Valley. For example, Sacchelli says, basil is sourced from locations less than two hours away. Not only does this ensure the freshest ingredients, but it also minimizes the impact to the environment resulting from transportation. “With 80 percent of the base for the red sauce coming from tomatoes, this is very important,” says Sacchelli.

Also sourced locally is most of the equipment used at the plant. “Eighty percent of the technologies used in the plant come from this area. In the packaging area, the filling machines, conveying systems, and palletizing equipment are from local companies,” says Morsellino. “We worked directly with the suppliers to develop these technologies for our requirements.”

The plant, with 105 employees, produced 9,000 tons of sauce in its first year and is scheduled to produce more than 35,000 tons in 2013. By extending the number of days and shifts the plant is operational, it has the capacity to reach 60,000 tons/yr. The construction of the plant also allows for an additional 10,000 sq m (3,300 sq ft) of space in which could be added two more lines.

Optimized packaging equipment
Packaging equipment, from proprietary suppliers, begins with a robotic depalletizer for incoming glass jars. Barilla uses three jar sizes: 200 g for pesto, and 400 and 500 g for tomato-based sauces. Sacchelli says that even though the glass supplier inspects the jars before shipping them, Barilla uses another vision system to repeat the inspection, analyzing the top, bottom, and body of each jar to ensure there are no defects. “If there is a point of weakness in a jar, there is a possibility it might break while moving through the line,” says Sacchelli. “So at this point, we automatically reject any jars that have a defect.”

After jar inspection, packages are turned upside down two times and are cleaned with air. Between the first and second cleaning, the jars are carried through a tunnel and are heated to minimize thermal shock to the bottle during filling. In the last step before filling, each jar is recorded in a shift register using a technology developed specifically for Barilla. After filling and capping, there is an automatic check of the shift register. If a jar disappears, Barilla automatically rejects the 300 jars before and after the missing jar, in case breakage has occurred somewhere in the process. “Not everyone has quality control at this level,” says Morsellino. “Perhaps it is too much, but it is really the driver of our safety approach. This is one example of what you can do in-house that you cannot do in a co-packing relationship.”

Barilla uses a 42-head rotary volumetric filler that normally runs at 400 bottles/min on each line. After considering fillers from three equipment suppliers, the company chose one with a valve system that provides maximum dosing accuracy with the least mechanical stress on the product. A vacuum-capping machine applies the metal, twist-off closures, which are then laser-coded with lot number and expiration date. About 11 jars per hour of production (more than 260 jars/day) are kept by Barilla for quality control purposes.

Next comes pasteurization, with jars heated to approximately 95°C and then cooled to 35°C in a pasteurization tunnel, with specific temperatures and times determined by the particular sauce recipe. With sustainability in mind, Barilla chose pasteurization equipment that reduces the amount of water used from 28 cu m/hr to 7/hr. “We reduced our water usage by four times, and we are able to recover about 50 percent of this water through a cleaning system that creates potable water,” says Sacchelli. (To learn more about Barilla’s sustainable packaging-related initiatives, see pwgo.to/156.)

After exiting the pasteurization tunnel, bottles are air-dried and then checked for the proper pressure level inside the jar. Moving to another room, the density of the product inside the jar is X-ray inspected to ensure no foreign bodies from the farm field have made their way into the sauce. “At this point, the rejection level is about 0.5 percent,” says Sacchelli, “but safety is most important.”

Next, Jars are labeled using a hot-melt system that applies preprinted cut-and-stack paper labels at 600/min. Amigoni says the decision to use die-cut paper labels is a matter of cost-competitiveness. “We have looked at other options in the past, but this is still the most cost-competitive solution for us,” he says. “The labels are offset-printed on paper, which we feel delivers the best print quality.”

Following label application, jars are loaded into trays in units of six and are bundled with shrink film at 95 trays/min. Tray packs are then loaded on pallets using robotic palletizing equipment.

The Barilla plant currently produces seven pesto varieties and 17 red tomato sauces. According to Sacchelli, because the two packaging lines have been optimized around several jar sizes, changeover for container size is minimal. Label changes take just two to three minutes. To change over the line from one recipe to another takes approximately 30 minutes and involves adjusting the parameters for the pasteurizer and rinsing the line for 90 minutes. By strategically scheduling the sequence of the sauces packaged—for example, starting with plain tomato-based and moving to those with more ingredients—Barilla is able to reduce the frequency of total sanitization of the line. In this way, Sacchelli says the plant can produce up to five different recipes per week.

Quality from farm to table
When Barilla says it has integrated its supply chain from farm to table, this is no exaggeration. From the beginning of the process, Barilla takes an active role in every aspect of the business. For the sourcing of its raw ingredients for its sauce products, Barilla defines the technical approaches to growing the tomatoes and basil. During the tomato-growing season, Barilla has the capability to map the production of the grower each hour in order to choose the best quality raw ingredients. “During the last tomato campaign, we did more than 10,000 quality tests on the raw material from the tomato producers,” Sacchelli says.

Barilla has also worked with the University of Piacenza (Horta srl) to study the rotation practices of fields to allow for more sustainable, more productive farming that requires less intervention without pesticides.

Once raw materials enter the Barilla plant, they are strictly segregated to eliminate cross-contamination. There is one area for tomato products—both pulp and diced—, one area for cheese, one area for herbs, one area for allergens, etc. Packaging materials are also stored in a separate area.

But one of the real differentiating factors at the Barilla sauce plant that distinguishes the quality and the flavor of its product is the way in which the sauces are prepared. The company has developed recipes and cooking practices that most closely follow what would be done in a traditional Italian kitchen. “The main idea is that we try to replicate what we do in the kitchen, but on a bigger scale, with much more food safety and quality control,” says Morsellino.

For tomato-based sauces, this involves first creating the sofritto—a blend of herbs, garlic or onion, depending on the recipe, upon which the rest of the preparation is built—and then slowly adding the rest of the ingredients in a specific order while cooking. For pesto sauces, ingredients are combined raw. Both sauces are pasteurized once before packaging to maintain shelf life. The tomato sauces typically have a 21-month shelf life, while the pesto, 18 months. Neither variety uses preservatives.

One of the great advantages the new plant affords Barilla is this flexibility to tailor its recipes to achieve the most authentic product, for pasta lovers in Italy as well as much of the rest of the world.

As Guido Barilla, Chairman of Barilla Group, said at the grand opening of the plant in October 2012, “The Rubbiano sauces plant is an example of an investment in quality in Italy with an international outlook. While on the one hand, the ingredients, the recipes, and the technology are Italian, the goal is to grow in foreign markets, taking the authentic Italian cuisine all over the world.” 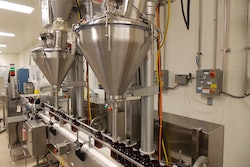 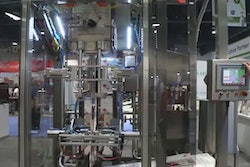 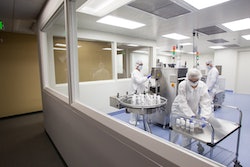