Toad-Ally Snax Inc., Bristol, PA, specializes in the production of chocolate-coated snacks such as pretzels and caramel corn. The company, whose name is derived from a play on the word “totally,” also does private label contract manufacturing and packaging of snacks for a variety of large retailers.

To package its diverse product line, Toad-Ally uses various horizontal and vertical form/fill/seal systems from Ilapak. These machines include Carrera and Vegatronic models. The Vegatronic vertical form/fill/seal machinery can produce pillow packs, block bottom bags, 4-corner-sealed, and 3-side-sealed pouches in various sizes, all with or without recloseable zippers.  The equipment can accommodate a range of heat-sealable materials such as polypropylene films, laminated structures, and barrier film structures for modified atmosphere applications.

One of Toad-Ally’s newest installations is the Ilapak Vegatronic 2000 OF rotatable-jaw machine. To provide the functions Toad-Ally wanted, Ilapak supplied a Vegatronic 2000 OF intermittent-motion film bagger with customized options, including a gusseting unit, an in-line zipper applicator to apply recloseable zippers from Zip-Pak, powered film-feed rollers, vacuum belts, a header hole punch for pegboard displays, and a special forming tube for executing 3-side-seal stand-up pouches.

Toad-Ally Snax uses a proprietary OPP/metallized PET/LDPE rollstock material supplied by SunFlex Packagers, Inc. and has married its new Vegatronic 2000 OF bagger to an existing 14-head combination weigher from Parsons-Eagle Packaging Systems. The Vegatronic 2000 OF vf/f/s bagger gives Toad-Ally Snax the ability to produce three-side-sealed stand-up pouches quickly and economically. Toad-Ally President Darlette Jenkins notes, “We are running the seven-ounce, 3-side-sealed, flat-bottom pouches at 45 bags of chocolate-coated mini pretzels per minute. I am advised by my production supervisor that the Vegetronic 2000 OF is capable of producing this size bag at 55 per minute.”

The snack processor also has done some upgrading of its case coding operations. For some time, Toad-Ally staffers had been manually applying thermal printed labels to it shipping cases. To save money and inventory space and also free up labor for other tasks, the company has installed 5800 Series large-character case printing equipment from Markem-Imaje. The Markem-Imaje system prints all bar codes and other product identification information directly on the sides of the corrugated shipping boxes. The corrugated flats and the Meta® case-forming equipment are supplied by Rock-Tenn Co..

Programmable for self-maintenance and ink reloading, the compact, modular, stand-alone Markem-Imaje 5800 incorporates Touch Dry® technology and uses inks that are solvent-free and environmentally friendly. The ink is formulated to dry on contact, creating 100% readable codes that do not bleed or fade and can print on a broad range of substrates. Jenkins reports, “The 5800 large-character ink jet case coder has eliminated many coding steps, allowing us to streamline the case-coding operations and saving us time and money.”

Toad-Ally’s new Vegatronic 2000 OF bagger and Markem-Imaje 5800 case coder were installed in May 2012. In total, the snack processor currently operates four Ilapak machines and six Markem-Imaje coders. Jenkins says, “The Vegatronic makes a superb bag, unparalleled on a vertical machine. It also applies the zipper closures without complication on every bag that is produced by this machine. And the coding equipment has enabled us to save about $200 per line per shift because we no longer need to print labels and manually apply them to the shipping cases.” 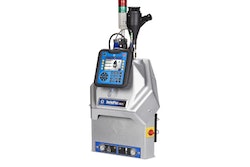