One can line begets another

Oriental Brewery was so pleased with the turnkey, high-speed, highly automated can line it installed last year, it’s installing a near twin this year. 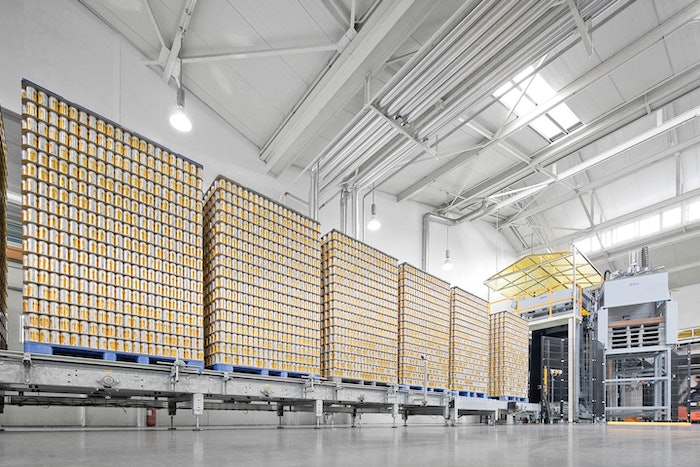 A specially designed pallet conveyor has been designed to handle a high volume of pallets and supply enough cans for a complete production shift.

The average South Korean consumes roughly 36 L (9.5 gal) of beer each year, making it the country’s top alcoholic beverage. Oriental Brewery is one of the main beneficiaries of beer’s popularity, as it is now number one in the South Korean beer market.

“The outstanding quality of our filling and packaging systems is one of the factors that enable us to produce top quality products,” says Charles Park, executive director of the brewery. To maintain this level of product quality out into the future, the firm recently made an additional investment in two KHS canning lines. “The decision to go with KHS essentially reflects our strategy of active future proofing,” says Park.

Beer in cans has become extremely popular recently in the South Korean beer market, and this trend is expected to continue. Thus the new can lines at Oriental Brewery’s South Korea plants. The one at the Gwangju facility handles 0.5-, 0.355, and 0.33-L aluminum cans and has been running since July 2011. The second line, being installed now in the city of Icheon, will be virtually identical to the line at Gwangju. Both are turnkey KHS lines. Says Park, “Procuring everything from a single source and having everything under KHS control gives us precisely the assurance we need as we continue to expand the canned beer business.”

At Gwangju, an Innopal ASH is used for can depalletizing. The pallets are raised to the push-off position, and the Innopal ASH ensures gentle depalletizing by removing the cans layer by layer. All the surfaces of the depalletizer that come into contact with the cans are covered with plastic sheeting to prevent damage to the cans. An automatic pallet liner remover picks up the cover frames and pallet liners with vacuum grippers and places them in separate magazines provided for this purpose.

To meet the specific needs of Oriental Brewery, a pallet conveyor has been installed in front of the depalletizer. The conveyor is designed to handle a high volume of pallets and supply enough cans for a complete production shift. Myunggoon Choi, engineering manager at the Oriental Brewery production facility in Gwangju, says this was done specifically to reduce forklift traffic. It minimizes congestion and eliminates potential hazards at the filling plant.

Once the cans have been placed onto the line, the KHS conveyors handle them very gently and unscramble them. Prior to rinsing on an inclined rinser, the cans are subjected to rigorous inspection. An empty can inspection system verifies that the can shape is correct, the shape of the opening meets specification, and no particulate matter is present in the cans. Damaged and dirty cans are rejected.

During the rinsing process, cans are lowered to the filler level and then enter the core section of the line: the electronically controlled volumetric Innofill DVD filler with 108 filling stations. Although the filler is currently configured to handle only the standard 0.5-liter, 0.355-liter, and 0.33-liter cans, that could well change in the future. The Innofill DVD could, for example, handle sleek or slim cans, which are much more slender than standard versions, should marketing decide to introduce those variations. Only new format parts and guides would be needed, and they could be swapped in very quickly.

Electromagnetic inductive flowmetering used for volumetric detection of the filling volume during the filling process has the major advantage that no mechanical parts come into direct contact with the product. Membrane sealing technology on the electropneumatically controlled filling valves provides additional microbiological safety.  Can-guide parts made of stainless steel ensure the highest standards of hygiene as well as a long service life. There is another aspect that maximizes hygiene: the filler-seamer monoblock is installed in an ultra-clean room.

Filling and seaming is followed directly by full and detailed inspection. The Innocheck platform includes an Innocheck CUB controller with touch screen monitor for operation and visualization, an Innocheck IFMS filler management system, an Innocheck FHC fill-level monitoring system, and an inspection system developed specifically for Oriental Brewery that verifies the position of the ring-pull tab.

Cans that pass inspection proceed through the can turner and into the Innopas PII SC pasteurizer. The Innopas PII SC is a double-deck pasteurizer that Oriental Brewery uses as a pasteurizer and as a warmer.   After passing through the KHS Innopro Corvus hygienic filtering system, the Cass beer varieties are warmed up in the pasteurizer. This is done merely to prevent condensation on the can during the packaging process. OB lager brands, on the other hand, are put through a defined pasteurization process. The clamp nozzles used in the Innopas PII SC produce an exceptionally precise spraying pattern that optimizes the heat balance within the machine, thereby considerably reducing water consumption. The KHS PU control ensures that germs are effectively destroyed while full flavor stability is retained.

A blower system for the top, bottom and side walls of the cans ensures that the cans are perfectly dry following the pasteurization or warming process. Once again, ensuring maximum hygiene is the motto here. An Innocheck FHC is used to verify the fill level on this line as well. Improperly sealed cans can also be quickly identified. Upending these cans causes them to lose quite a bit of beer. The good cans are then rotated in the twister and coded by an ink-jet printer before continuing  on to the cartoner, where the cans are assembled into four or six-packs. After being placed onto trays holding 24 cans, the products move on to palletizing.

The Innopal PB 1 HS 2—a single-station palletizing robot with pallet lift, elevated pack infeed, and two-piece pusher plate—is used for the palletizing operation. Layers are formed automatically as the packs are being supplied on two lanes. To secure the load, finished pallets pass through a pallet wrapper and are then transported to the storage area by forklift truck.

Choi explains that the turnkey canning line has been operating highly efficiently in three-shift operation right from the start. “The great versatility of KHS filling and packaging systems is another factor which enables us to attain such high operational efficiency,” adds Park.

Given this level of customer satisfaction, it’s hardly surprising that Oriental Brewery decided to place an order for yet another KHS turnkey canning line. The new higher-capacity line (90,000 cans an hour) is scheduled to be put into operation in Icheon by mid 2012, exactly one year after commissioning of the canning line in Gwangju. Park sees it as an enormous advantage that the operators in Gwangju are already very familiar with “their” KHS canning line and that the two plants will be able to share information to help resolve any issues that arise. “Both lines will use the same sets of spare parts, which will also greatly simplify things for us.”

The company slogan “PRIDE (Process, Recognition, Informality, Drive, Ethics)” will continue to point the way forward at Oriental Brewery. The clear implication is that employees have just as much reason to be proud of “their” brewery and “their” brands as the rest of the South Koreans. Oriental Brewery will play its part by making sure that the brewery with the longest history in South Korea does not neglect its roots as it pursues an aggressive strategy of innovation. The company will produce top-quality branded beer that caters to the tastes of consumers in South Korea and, to an increasing extent, in other Asian countries as well.

“I would like to emphasize that it is fully consistent with our company slogan for us to invest in production assets which we can be proud of now and in the future,” say Park.