Desert Extrusion patents a new vinyl packaging design that addresses the previous package’s unfortunate tendency to behave like a jack-in-the-box. 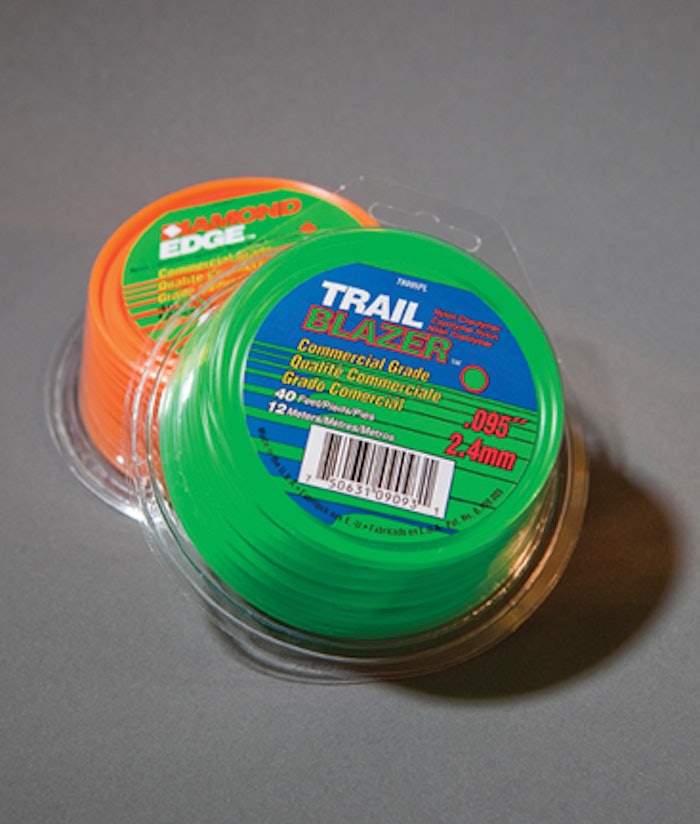 NEW FORMAT. Packages that pop open in the store are a thing of the past since Desert Extrusion began RF-sealing a vinyl backing
A few years back, Phoenix-based Desert Extrusion Corp. had a problem with its packaging.

“We were at a hardware trade show,” says company president Bob Phillips, “when we learned almost by accident that sometimes the blister pack for our trimmer line was popping open on the shelf. One of our customers just happened to mention it. So we asked around to some other customers, and they confirmed it. They just figured that’s the way it is. But it wasn’t acceptable to us. Not only was the occasional defective packaging causing waste because the trimmer line could not be rewound back into the blister pack. The commotion caused by bursting packages actually set off store alarm systems in a couple of cases.” The bottom line was that retailers were then stuck with a bird’s-nest like mess of trimmer line and no way to recoup the cost.

The blister pack that was causing these problems had a thermoformed rigid vinyl plastic cavity on the front in which sat the spool, or “loop,” of trimmer line. But the backing was made of paperboard. It was heat-sealed to the blister cavity, then the trimmer line was inserted into the package. The paperboard featured a pre-punched hole that acted as a dispenser, allowing users to unwind the amount of trimmer line needed, cutting it to length. But as the trimmer line—which is made of nylon—absorbed more and more moisture, it would expand to the point of springing open and popping off the paperboard backing.

“We really studied the situation, taking 18 months to rectify it,” says Phillips. “We thought maybe it was the card or maybe not. So we went to paperboard suppliers, who referred us to the ink and coating suppliers, suggesting the ink and or coating on the card was releasing the seal. There was a lot of passing the buck.”

Gradually, Phillips and colleagues found that the problem was neither with the paperboard back nor the ink. Simply, the stiffer, thicker trimmer lines, such as .095-in., .105-in., and .130-in.—when coiled—pushed against the back of the paperboard and caused it to separate from the plastic cavity to which it was heat-sealed. Eventually, Desert Extrusion sought out its long-time thermoforming partner, Flexpak Corp., to unravel the problem. According to Phillips, Flexpak’s ready attitude was, “Let’s fix it.” In other words, no more passing the buck.

In this case, Flexpak decided to develop a thermoformed plastic backing—the same material used for the front blister—in place of the paperboard backing. It turns out that it takes only 9 to 15 pounds of trimmer-line pressure to separate the paperboard backing from the front blister but more than 100 pounds of pressure to separate a rigid plastic back.

However, developing a plastic backing proved more challenging than one would at first think. Says Flexpak’s technical director Jim Boone, “They ship their trimmer line to humid places, such as Puerto Rico, where the packaging problem was really exacerbated with the paperboard coming loose. So the idea was sound, but developing a compatible backing met with some challenges.”

Desert Extrusion’s Phillips believes that one reason Flexpack is as consistently successful as they are is because they use the best available packaging materials. In this case, the material supplier is Klöckner Pentaplast. Flexpak’s Boone admits he’s tried other alternatives. “But Klöckner Pentaplast works best,” he says.

The same formula is used for both the front blister cavity and the backing. What’s different is the material’s gauge. The back is a uniform 0.010-ga. But Desert Extrusion carries a range of different brands, so two different package heights are required to accommodate the varying thicknesses and shapes. The taller package takes a front blister cavity that is formed from a 0.0175-ga material because it’s stretched longer, which necessitates a thicker film. The shorter package takes a 0.015-ga material.

The real challenge in developing this package was arriving at a proper seal, says Boone.

“Desert Extrusion uses Radio Frequency (RF), a sealing method that welds together the plastic blister to the plastic backing. In calibrating the correct amount of combined time and power for the RF sealer, a host of materials were tried, but Klöckner Pentaplast’s Pentaform® won out. Flexpak worked with Desert Extrusion and the RF sealing manufacturer to design tooling that would work, coordinating packaging size with what Desert Extrusion wanted. And Klöckner Pentaplast helped us with the specially formulated rigid vinyl film that would assure the best outcome.” Flexpak thermoforms the backing component and the blister cavity on equipment from Sencorp. A 1-in. hole is included in the plastic backing. This whole acts as a dispenser.

The process of marrying the product with the package is atypical in that the front and back components are RF-sealed together before the product is placed inside. Once the two thermoformed parts are sealed to each other, Desert Extrusion uses a machine of its own design to push the trimmer line into the hole in the backing piece. Then it’s a matter of “winding” or “spooling” the line into the package.

In the beginning, says Phillips, certainly one of the big design issues was the size of the flanges. According to Boone, the industry standard of a ¼-in. flange was not going to cut it. The short package requires a 0.278-in. flange while the taller one requires a 0.378-in. flange.

What about product info?

One challenge that surfaced relatively late in the game revolved around product information. With the replacement of the paperboard backing, Desert Extrusion did not have a “wall” for this information. But Phillips eventually realized that it could be condensed and placed on a 2-in. label, which is affixed to the top of the blister cavity in the last stage of package assembly. A pressure-sensitive tamp-style labeler from Quadrel Labeling Systems is used for label application.

Phillips proudly states that the final package design is so innovative that Desert Extrusion has a patent on it. “Of course,” he observes, “other trimmer line manufacturers try to get around it by using a modified fold-over clamshell design with a hole in the back, but that’s all right. I encourage the competition. It keeps us sharp.”

Yet even with the patented design, Desert Extrusion found that new packaging challenges continued to present themselves. Phillips explains.

“Our European customers want 15 meter loops, or 49 feet. It’s just standard for them. Trimmer line naturally coils like a big spring when the winding machine pushes the line into the package’s hole. But we can’t push too much into the hole or it will twist and kink up. With a smaller diameter trimmer line that’s okay, but for the commercial lines at .095” diameter or thicker, we couldn’t get 49 feet into a package.” So Flexpak designed an even larger package for the European market.

On the subject of cost, Phillips is very clear. “Cost and expense are two different things. Giving our customers good value and consistent packaging keeps them coming back to us. That’s not expensive. That’s good business. We rarely lose a customer, and we rely on word of mouth to propel sales. Packaging is a big part of what we have to offer, particularly because the packaging is functional in that it’s used as a dispenser. A guy will cut off 20 or 25 feet, then hang our product back, doing this two or three times until the trimmer line is gone.” He estimates that for the slight increase in new-packaging costs, fewer dollars are lost in product waste now that the jack-in-the-box behavior of the old packaging is a thing of the past.

Phillips adds that no one thinks about trimmer line unless something goes wrong. “Ultimately,” he says, “our focus is the guy out there in the field who’s doing the trimming. It’s not a pleasant task, so any improvement we can make is worth it.” By all indications, the improvements made by the three partners on this project—Desert Extrusion, Flexpak, and Klöckner Pentaplast—have been well worth the time and energy expended. 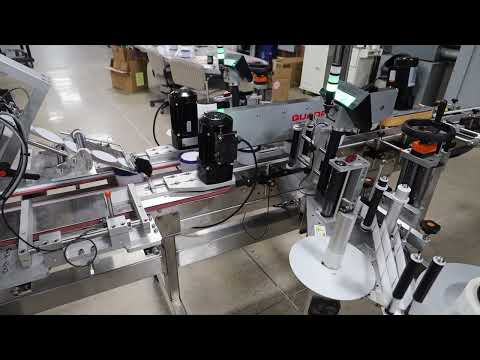 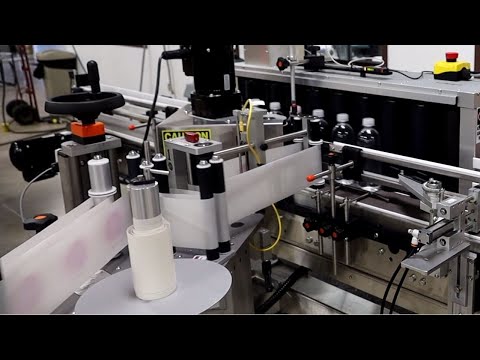 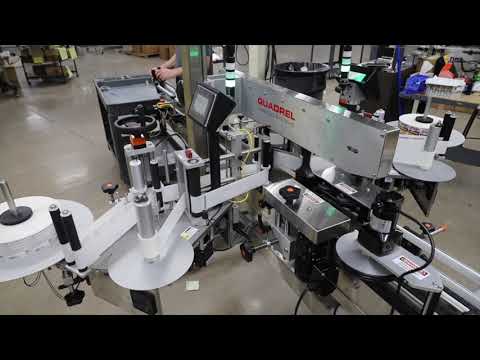