Rick Lingle
NET SAVINGS. The tandem of case erector (above) and bag inserter (top) have reduced the crew requirements by several people per

The 305-ft, 3,705-gross-ton namesake fishing vessel of Golden Alaska LLC, Seattle, WA, operates with a crew of 132 and two packaging machines. The packaging machines were added in 2008 as part of a multimillion-dollar conversion and modernization investment. Along with new fish processing equipment, the improvements included an on-board bag-in-box packaging system manufactured by Pearson Packaging Systems (www.pearsonpkg.com). The system comprises a case erector and a bag inserter, a tandem that permits the packaging operations to be conducted onboard, with the automated equipment providing a major assist to a busy crew. According to company VP of operations Larry Levien, the idea behind the four-plus-months’-long upgrade project that was competed in July included labor savings for the vessel’s manual packaging operations.

“The major benefit is that it cuts down on the number of operators needed,” he says. That amounts to several persons per shift for the around-the-clock operations. The space and labor savings is especially crucial onboard a ship, where every bunk counts.

The supplier and integrator for the upgrade project was Carnitech (www.carnitech.com), which recently became part of Marel (www.marel.com).

The improvement project corresponds to a sea change in which the Golden Alaska converted much of its surimi capability over to fish fillets. That was a strategic decision that improves recoveries to help offset a drop in quotas, Levien explains. “It takes a lot less fish to produce the same amount of finished product,” he points out.

That change played perfectly into the ship’s expansion plans for automatic packaging capability. “We picked up the packaging space from the area that had been devoted to surimi additives and associated material,” Levien says. “It’s unusual for a ship to have room for something as large as packaging machinery, but with this available space we were able to do that. It worked out.”

The machines were located in the bow of the ship in a location called the “zero gravity room.” This location puts the machinery near the finished goods area; the fish enter the ship in the back and are processed sequentially as they are moved forward.

The Pearson Model CE15-ST case erector is a compact unit (8 x 7 x 6 ft) that’s ideal for the ship’s space constraints. Although it has a rated capacity of just 15 cases/min, that’s still in excess of the ship’s target rate of 10 cases/min.

Run by a Rockwell Automation (www.rockwellautomation.com) MicroLogix programmable logic controller, the erector features an ergonomically friendly, powered 45º angled horizontal case magazine. This allows the case to be brought into the machine so that opposing vacuum can be established. With both sides of the case held by vacuum, the case is positively opened with shorter movement in the machine. Once opened, it is transferred to the powered flap-folding section, tape is applied along the bottom, and the formed case is discharged from the machine.

The CE15-ST releases cases to the Pearson model BI18 bag inserter positioned three feet away. The BI18 pneumatic machine can operate at speeds to 18/min.

The BI-18-S has an optional flap-folding option on it, which is bolted to the BI-18-S’s frame; that feature reduces the effective output to 15 cases/min; again, that’s well in excess of the ship’s requirements. It prefolds the flaps at the BI-18-S’s infeed. After the case enters the insertion area, a bag pulled from rollstock is held by vacuum until a mandrel enters the bag and pushes it into the bottom of the case. The mandrel retracts, and the case is discharged.

The PackML-compliant inserter is operated by a Rockwell Automation PanelView B300 interface running Rockwell’s ControLogix software.

Measuring 19.45 x 10.375 x 7.875 in., the B-flute RSC corrugated cases from Weyerhaeuser (www.weyerhaeuser.com) are a change from the E-flute boxes Golden Alaska used before. Levien would like to sometime revisit using lighter, E-flute boxes in order to save on freight.

Prior to packaging, the fillets are first frozen using one of nine plate freezers. “We freeze everything into a seven-and-a-half kilogram [16.5-lb] block,” says Levien. The fillets are loaded directly into wax-coated paper-based trays that are then loaded into an aluminum tray for direct placement into the plate freezer. Once frozen, the boxes of fish are loaded three per case into the awaiting lined cases prepared using the Pearson equipment. It’s pretty much a continual process unloading from the nine plate freezers, with only a few minutes’ break from time to time between batches, Levien notes.

Cased product is stored in a central freezer with a capacity for 900+ tons of finished product. The cases are stored until the ship returns to port, and are then quickly off-loaded and ready for shipment.

Depending on conditions, the ship returns to port every eight to 12 days, Levien says.

The ship is accompanied by four smaller ships that bring their catch of fish to the Golden Alaska for processing and packaging.

The crew is split into two 12-hour shifts to operate the machinery 24/7.

Although Levien can’t point to a calculated payback for the custom packaging operations, he says that “it’s better than before. I’m just pleased in the way that the system has functioned. I was concerned about more problems than we’ve had so far [see sidebar above], but hopefully the system will continue to run this well.” 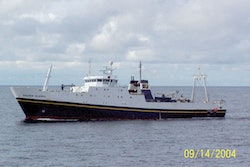 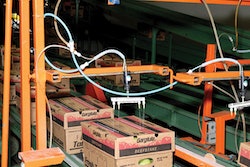