A toast to standards

By implementing an open standard known as PackML in its Newlands Brewery in South Africa, SABMiller gains increased insight into how machines are operating. That leads to better diagnostics and, potentially, improved preventive maintenance. 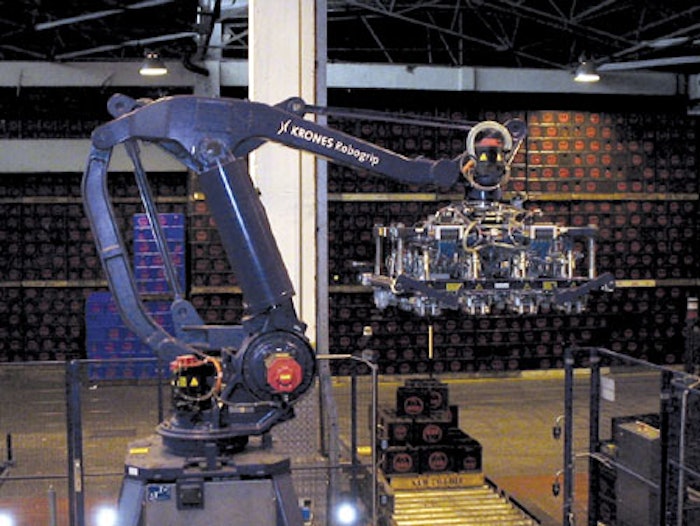 SABMiller has implemented the PackML standard on six packaging machines in the Newlands Brewery line, including this robotic pal

Brewing is a demanding job requiring plenty of precision, and packaging a few billion liters of beer is no simpler. The push for common production processes and equipment across global facilities is prompting increased use of standards.

Though the project in at Newlands Brewery, situated in Cape Town, South Africa, is still in its early phases, the company appears sold on the benefits of standardization. “PackML has worked well for us. Whenever we purchase packaging machinery, we specify it,” says Garth Basson, manufacturing systems manager at SAB Ltd., the South African operation of SABMiller plc. He adds that PackTags, a related OMAC standard that provides common names, is being added to future requirements.

Though many TV beer ads make claims about brewing small, hand-brewed batches, most breweries are in fact large facilities. That’s especially true for international companies like SABMiller, which produces 13.7 billion liters of beer in a year.

SAB Ltd. of South Africa has seven breweries, about the same number as the eight Miller plants in the U.S. In total, Miller has 120 breweries scattered across 40 countries on four continents.

The South African plants have 28 production lines that produce 2.5 billion liters of beer per year, a solid segment of SABMiller’s output. Perhaps more important, South Africa produces nearly 40 per cent of Miller’s earnings before interest, taxes and amortization. That’s a key reason that South Africa is the testbed for implementing new standards.

This high volume means new brewery construction is rare, but upgrades are common. Existing plants are being upgraded continuously, so new equipment has to work with older technology, some dating back to the 1970s, Basson notes.

It also means that communication between equipment from many suppliers is a necessity. Like many global manufacturers, the brewer is moving towards standardization, focusing on standards that multiple equipment vendors are likely to support.

“We’re always trying to find international standards so we don’t have to write out our own documents. We can get OEMs to buy into it because it’s a standard, not an SABMiller document,” Basson says.

At present, SABMiller is one of a handful of large manufacturers who are pushing the standard forward. Observers predict that the adoption of the OMAC standards will soon be widespread.”We’re convinced this is the best way to gain interoperability,” says Craig Resnick, research director at ARC Advisory Group.

SAB Ltd. has implemented the standard on six packaging machines, including conveyoring. PackML is running on 10 PLCs.

The company is already seeing improvements in maintenance and other areas, but Basson notes that the real payoff will come when the standard is deployed throughout the company’s many production facilities. “The best way to see benefits is through widespread adoption,” Basson says.

This focus on standardization is key to the company’s efforts to gain more consistency in controls, management, and production throughout its many global facilities. Among the goals for this initial rollout is global adoption, which will make it simpler to compare production lines.

“PackML and PackTags make it potentially easier to roll out applications worldwide. When they’re implemented, it makes it easier to benchmark,” Basson says. He explains that in most breweries, each production line is dedicated to a single package, such as filling 750-mL bottles, so it’s difficult to make line-to-line evaluations unless lines in several breweries can be compared.

Once benchmarks are set, operators who figure out how to enhance a production line can share their insight far more freely. “Knowledge sharing should be improved. If people in one facility say they get a step change improvement, others should be able to replicate it,” Basson says. He adds that SABMiller recently established a knowledge sharing initiative based on standards.

This initiative will set the stage for international benchmarks and information sharing, but that’s still a ways off. Before the company pushes the OMAC standards into worldwide usage, there are shorter-term goals that must still be met.

Among them is to get similar production lines working with the same commands and process steps. “When we do a rollout across South Africa, we’ll know that every start and stop is the same,” Basson says.

By the time that rollout comes, it’s likely that SABMiller will be using PackTags, an OMAC standard that augments PackML by establishing names for fundamental data elements, as well as definitions of data sets. Employing that standard will add another level of performance in the company’s thrust to have commonality at facilities around the globe.

“PackTags will drive information consistency so we’ll have common machine statistics throughout all our breweries,” Basson says.

Though many of the gains come with broader rollouts, SABMiller is already reaping benefits in South Africa. One key is increased insight into how the machine is operating. By monitoring the various machine states, managers and operators can easily determine how long a machine is sitting idle, and what’s causing it to drop into a standby mode.

A key to any manufacturing improvement program is decreasing downtime. That’s another benefit that comes from getting more information on the machine’s operation.

“The teams have used state models to support diagnostics. That gives them an entry point that’s more around the break fix point than with previous approaches to maintenance,” Basson says.

“Feedback from maintenance personnel is very positive,” he continues. “The error report gives them an indication of what the machine is doing and what PackML state it’s in.”

Standardization also makes it far simpler to buy equipment. SABMiller translates its requirements into the OMAC spec. Documentation goes down to the register to register level, “so it’s very clear to OEMs what we want and where we want it,” Basson explains.

PackML was used successfully during the acquisition of the equipment being used in the initial tryout.

If implementation of the standards is as successful as analysts and others expect, equipment builders could see savings in what it costs to build their machines, says Basson. Because if more end users specify international standards, he explains, it will mean less customization will be required by the OEM, and that should have an impact on how the OEM prices a machine in the marketplace.

At this point, PackML technology is only being used on the “dry side” of Miller’s packaging operation. But filling and capping could be added quickly. The only reason for the current limitation, says Basson, is that the machines in need of replacement happened to be those on the dry side.

OMAC’s directors have longer-term plans that will link the packaging specifications more closely to processing side standards that help link the factory floor to the front office.

“PackTags and PackML are being driven into ISA S88 so that eventually you can track incoming material through the back door,” says Larry Trunek, OMAC’s PackTags subcommittee chairman and principal electrical engineer at SABMiller-Milwaukee.

Integration between the S88 and OMAC standards will make it simpler to transfer data from the process die to the packaging side. “That’s the goal, “ Trunek explains.