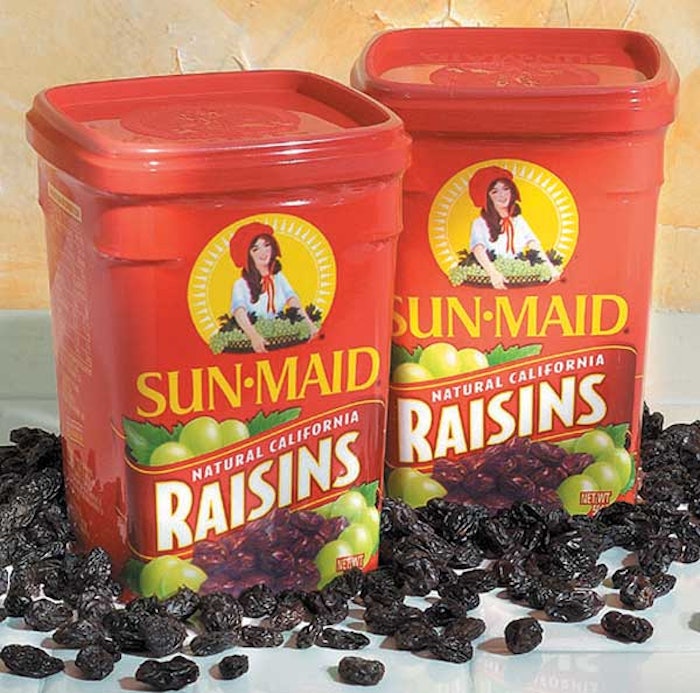 RFID and anti-counterfeiting may be “hot” packaging security topics, but the front lines in the daily battle of security are still at the store shelf. There, retailers expect packages to deter tampering and theft.

The shrink band, which emerged as one of the first tamper-evident techniques, is still a mainstay in the battle against tampering. But in some cases it’s evolved into a full-body shrink sleeve that brings terrific shelf impact while still fulfilling its role as a TE device.

A recent example is the new package from Sun Maid Growers. Designed originally for export to Europe, the package is a plastic tub that holds 500 g of raisins and incorporates a friction-fit closure. The package uses a full-body oriented polystyrene shrink label from Alcoa that extends up over the closure to provide tamper evidence.

Packaging technology that deters theft is also highly prized, especially by retailers who know that significant profits walk out of the front door each day under somebody’s coat.

“Theft is a major problem for retailers,” offers Mark Doyle, vice president of Jack L. Hayes International. The consulting company advises retailers on loss prevention and asset protection. “A retailer’s net profits are small, about three cents on the dollar. What that means is the retailer has to sell more than 20 items to make up for the one that was stolen.”

That may appear to be the retailer’s problem, but Doyle points out that consumer packaged goods companies lose, too, if theft remains unchecked.

“One of the final steps a retailer takes when faced with theft is to put the package into a locked case,” says Doyle. “Then, sales go down because in today’s retail environment there is no store help to open the case for customers. When the sales go down enough, the store stops carrying an item.” It’s a downward spiral, says Doyle, and theft is the first step.

Changes in retailing are amplifying theft problems. Superstores—retail outlets with more than 175ꯠ square feet of floor space—are both fast-growing and a target for thieves. According to University of Florida statistics, those stores are experiencing higher loss rates than traditional supermarkets. The stores carry higher-value, non-food items, and they are seeing higher shoplifting rates.

Clamshell blisters are emerging as a central packaging tactic against shoplifting, especially in larger stores. In areas such as hardware, auto accessories, tools, and home improvement items, clamshell blisters are readily apparent. Their goal is to defeat one of the most common shoplifting tactics—removing the product from the package by tearing the package open. Blisters, as most consumers will testify, are hard to open.

Clamshells are highly visible at club stores, where they help sell product and deter shoplifting.

“What drives the growth in clamshell blisters is the club store environment,” explains Jeff Green, president of U. S. Merchants Diversified Re-Packaging. The Los Angeles-based contract packager does many of the clamshell blisters that find their way into Costco and other club stores.

“The clamshell blister tells the story of the item,” Green emphasizes as he explains that retailers see clamshells as both a merchandising tactic and an anti-shoplifting tool. “It cuts down on shrink, also. It makes it difficult for somebody to put the product in their pocket and to walk out, so from a security standpoint, it works.”

One reason Green’s company is as successful as it is with the oversized clamshell blisters is the patents it holds on a packaging configuration. In an approach that goes beyond the blister, patents held by the company outline the technique of standing blisters vertically in slots in corrugated trays. From a retailing perspective, the slots hold the clamshell blisters upright. That way, as customers remove packages, those left in the tray remain upright for maximum display.

The use of clamshell blisters is expected to remain a popular security strategy. Recent research from the Freedonia Group suggests that clamshell blisters, as a high-visibility package, will grow at 6.4% per year. The move into heavier and more costly products such as hardware, cosmetics, and toiletries and electronics is among the factors driving the growth.

Yet these packages catch flak from consumers because they are hard to open, requiring scissors and sometimes knives to open. However, observers believe the retailers who weigh consumer inconvenience against anti-theft capabilities will continue to have the clamshell blisters sealed.

The trend may be toward clamshell blisters, but some consumer packaged goods companies are looking for alternatives that are more environmentally sound and easier to open while still giving retailers anti-theft protection.

One company with that strategy is HP with its ink-jet cartridges. Secondary packaging for the film-wrapped cartridges is a paperboard folding carton with side panels beveled toward the front to add brand identity. Knowing how easy it would be for an unscrupulous shopper to tear open the paperboard carton and pocket the cartridge, HP puts two cartons into oversized PVC clamshell blisters, a tactic dictated by retailers.

“All accounts are very conscious of theft prevention,” says Ken Fischer, product manager at HP. “We found the clamshell blister was a quick way to provide an anti-theft packaging solution to stores.”

However, consumers and some retailers weren’t as happy with the clamshell blister as other stores were. Office supply superstores, for example, were concerned that the footprint of clamshell blisters was inefficient for their operations and planograms. And, to nobody’s surprise, consumers found the blisters hard to open.

Based on customer and retailer feedback, HP investigated alternative packaging for its print cartridge multipacks. The firm eventually went to a Durafold carton from AGI/Klearfold that’s made of a polypropylene-based synthetic. This new approach to packaging involves 60 percent less material than before, and the synthetic material can be recycled with #5 plastics.

The glued carton holds two film-wrapped cartridges and has the same bevel shape as the cartons for single units. But unlike the ordinary paperboard cartons, the PP-based material has far greater tear resistance. So shoplifters can’t rip a carton open and put the contents in a pocket or under a coat before leaving the store.

These packages are now rolling out to specific retail accounts in the United States. The new package design is more space efficient, which appeals to many retail stores. But for those stores who still prefer the clamshell blister, that format is still available from HP.

Fischer states, “This new package is smaller, and it is more environmentally sound. Consumers like that. This also offers benefits to the retailer. The smaller size delivers improved logistics and Durafold offers theft resistance.”

Another approach that relies on toughening paper so it better resists tearing comes from Colbert Packaging working with Valeron Strength Films. The Blisterguard package incorporates a foldover, paperboard card that encloses a blister holding the product. The product improves theft resistance because a layer of Valeron film is laminated to the paperboard. The cross-laminated high-density polyethylene film adds toughness to deter thieves who would tear open a carton.

It’s an alternative to the clamshell blister with the added advantage of offering the graphic impact that printed paperboard can deliver, according to Valeron Strength Films. Costs are lower than a clamshell blister, the company says.

Regardless of the anti-theft or TE device used, what it comes down to is that the retailer expects no less than a package that will withstand assaults by shoplifters and provide evidence if tampering has occurred.

For more on tamper evidence and anticounterfeiting measures, see: packworld.com/go/w127