Climbing the ladder of f/f/s technology

Beginning a decade ago, Calhoun Bend Mill started with simple packaging equipment, went through a rebuild upgrade and now has two new vf/f/s machines for bags of its food mixes.

After 10 years of steadily upgrading its packaging, Calhoun Bend Mill operates two automatic vertical form/fill/seal machines that pack an extensive variety of products into both retail and foodservice sizes, from 3 oz up to 5 lb. The Jonesville, LA-based company now sells nationwide, and has parlayed the “Southern goodness” of its recipes into a fast-growing business.

Its packaging materials and methods of packaging have changed a lot over the last decade, since it bought its first moderate-volume f/f/s machine. “Our first machines were relatively inexpensive and simple to operate,” says Jesse Calhoun, the company vice president who oversees the plant’s production. “Those machines didn’t have a lot of ‘bells and whistles,’” he says, “but they were easy to operate and maintain.” Output of these machines eventually reached 30 bags/min, he says, for the popular sizes of bags, mostly 8 oz.

When his contact for those machines, Robert Clary, joined J&J Mfg. Co. (Beaumont, TX), the close relationship with Jesse continued. Calhoun liked the machine concepts that J&J had developed, and about two years ago, the company had one of its first machines rebuilt by J&J.

“They replaced the old controls with new electronics and added other components that improved our output and package consistency,” Jesse reports.

As the Calhoun business expanded, Clary showed Jesse the new Mira-Pak Saturn 12 machine developed by J&J. J&J had bought the rights to the Mira-Pak name and machines two years ago from a company that had concentrated on rebuilding the 3ꯠ Mira-Pak machines that had been sold by the original company for 27 years.

After seeing the new machine in operation, Calhoun purchased the new Mira-Pak Saturn, trading in its old machine in the deal. It continued to operate the rebuilt machine until late last year, when, after being demonstrated at Pack Expo 2000, another new Mira-Pak was delivered and installed at Jonesville, the company again trading in the older machine.

Both new vf/f/s machines were installed under auger fillers from AMS (Malvern, PA) that had been used with the older equipment. The second Mira-Pak was also equipped with a SmartDate web coding system from Markem (Keene, NH). Jesse Calhoun liked it so much that he had another retrofitted onto the first Mira-Pak.

“We looked at a lot of other machines, especially every time we went to Pack Expo,” Jesse explains. “Some other vertical form/fill/seal machines are high-dollar systems, and they have their place. The Mira-Pak is a fine machine, too, and it really fits our needs. Plus, a lot of the maintenance can be done by in-house because of the simplicity of the machine design. But it still has a lot of features that you find on the more costly machines.”

Although Jesse likes to say that his training consisted of fixing equipment on the family farm, it sounds like Southern understatement. However, working for a company that operates in a hard-to-find location like Jonesville, he knows the importance of being able to service machines in-house.

“When our second new machine was installed late last year, we had a true test of how easy the Mira-Pak is to learn, because we were starting up with a brand-new operator,” he says. “She was running the machine just fine with only a few days of training from me. That’s critical for us.”

Because the machine operates via a programmable logic controller, its memory stores the settings for each bag size. “So the operator simply uses the control panel to locate the right product, and the machine pretty much does the rest,” Jesse explains. “Changing material is also easy with the quick-change roll shaft. It makes it easy to load and center the film.”

Another feature that’s important to the company is easy availability of most parts. “We really don’t need to inventory most parts, especially the electronic components,” he says. “All of them are commonly available from local suppliers, so we rarely have to go back to J&J for parts. Other machines use custom parts that could take days to deliver.” And, he says, having two identical machines makes maintenance easier, too. He also likes the machine safety features, including interlocked guarding.

Both machines feature modems so they can be plugged into a phone line to J&J for monitoring. “We had a minor problem with one package, so we hooked up the modem and contacted J&J and explained what we wanted to do,” Jesse recalls. “A technician told us to just stand back and watch.

“Before you knew what was happening, he was starting and stopping the machine while he was making some adjustments to get the package the way we wanted it. This is probably not the first machine with this feature. But for a machine that’s reasonably priced, I think it’s significant. It’s indicative of the kind of service we’ve experienced from J&J. They treat us like royalty.”

Probably the two machine features that are most important to Calhoun are quick changeover and the broader range of sizes the machines can handle.

“These machines really can handle a much larger bag size, and now we can run 5-pound bags for the foodservice market,” Jesse says. “Our older machines were limited to smaller bag sizes. What’s really great is that our changeover time has been cut in half, compared to the former machines.

“We can now shift from a 3-ounce bag up to a 5-pound size in 15 minutes or less. With the old machines, it would have taken us 30 minutes or more. That’s real helpful when you’re trying to pack to order,” he explains.

Film loading and what J&J calls its Accu-Track film handling system are part of the reason, as are quick-connecting forming collars and the PLC’s memory for setting the cut-off lengths.

Calhoun Bend Mill was launched some 160 years after the Calhoun family began farming near a bend in the Black River. The mill began by grinding corn meal to family recipes, but today its product assortment has broadened.

Of course, the wider product variety means that Jesse has to schedule production based not just on package size but also on the ingredients, since some require far more extensive cleaning of the filler and bagging machines. Many of Calhoun’s products are packed into 8- or 10-oz sizes, and Jesse says the mill usually can produce about 40/min with the new Mira-Paks, a third more output than the older machines.

“We could run these machines quite a bit faster,” he admits, “but we’ve learned how to run them most efficiently. I think it’s better to run a bit slower and keep them producing without downtime. We know we get more cases into the warehouse each shift this way.”

Calhoun’s packaging area has been upgraded in the last couple of years. Production from the Mira-Paks discharge onto what Jesse calls a pack-off system from Smalley Mfg. (Knoxville, TN). It includes inclined conveyors that transfer pouches and bags onto a turntable so workers can load the packs into shipping cases.

Decorating its packages with Calhoun’s signature red gingham printing, Calhoun Bend Mill has come a long way in little more than a decade.

See the sidebar that goes with this story: More complex structures, too 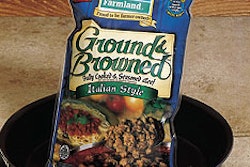