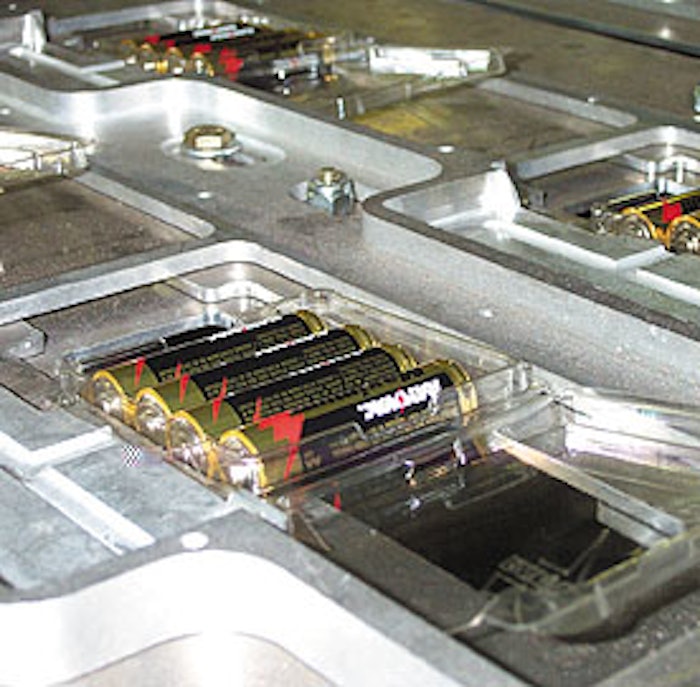 Integrated section comprises 8-up clamshell denesting onto a custom conveyor that moves left to right (above). Midway of the mac

Like negative and positive poles, the building and machinery at Rayovac’s packaging operations in Madison, WI, are a study in opposites. Although the historic facility dates back to 1916, it houses two of the latest battery packaging line layouts started up in the latter half of 2000.

The two lines, one for AA and a second for AAA batteries, were designed with flexible dedication in mind. While each line is dedicated to a single battery size, each line can pack three configurations: eight-, 10- and 12-count packs. The packages use clear, reclosable recycled polyethylene terephthalate (RPET) clamshells in combination with a hole-punched graphics header card (see Oct. ’00, p. 38) that makes them peggable for retail display (see graphic below).

Rayovac declines to identify rates other than to acknowledge it currently runs at more than 50 packs/min. However, packaging output for the AA line was to double when Rayovac added a second battery feeding system from a nearby line in early ’01. The line configuration was designed for that change from the outset.

The batteries are introduced into the straight-line indexing flow of the clamshell conveyor by a Rayovac-designed battery orienting and infeed system. The incoming battery flow comes in at a right angle about midway of the main machine.

The feeding machinery was built by Southwest Machine and Tool (Avoca, WI) using a majority of moving parts from Doig (Appleton, WI), including air cylinders, pick-and-place unit, and servo drives.

Southwest was guided by the expertise of senior project engineer Kenneth Tippery, a 22-year Rayovac veteran. The feeding system’s servo drives replace the mechanical components used previously on Rayovac’s battery feeding systems. Tippery says the servos improve accuracy and repeatability. For example, servos are used to direct the vacuum pick-and-place units that transfer the batteries into the clamshells.

“Servos allow us to hit our target where batteries are placed,” says Tippery. “If they aren’t set where they are supposed to be, then we can’t close the clamshell lid.”

Plastic bulk trays from Rayovac’s battery manufacturing facility in Fennimore, WI, are loaded with 500 batteries vertically oriented in a 20x25 pattern. The trays are loaded manually into the infeed, and from there the system automatically takes over. It indexes the trays, unloads them into a hopper and stacks the empty trays. Sets of servo-driven pistons push the batteries out from beneath the hopper and into plastic carriers arranged in two rows.

Designed for fast, tool-less changeovers (see changeover sidebar p. 23), the carriers are mounted to an indexing conveyor that positions atop a “bridge” over the clamshells in the main machine section. Once indexed in line with the clamshells, vacuum pick-and-place units (an improvement over magnet-based units Rayovac uses on other lines) load eight sets of batteries into the open clamshells. This is done in two cycles, one layer at a time, yielding the front and back rows in the packs.

Meanwhile, clamshells are denested from supply magazines eight-at-a-time at the head of the straight-line section. This is done via a rotary vacuum unit that places them into indexing holders. The RPET clamshells are supplied by Algus and by Plastic Ingenuity (Cross Plains, WI). The wide-open clams are positioned with their flanges atop an aluminum frame. Rayovac customized the clamshell holders with easy changeover via peg and holes to accept any of the three sizes packed (see sidebar).

The printed die-cut cardstock from Cardpak (Solon, OH) is applied over the batteries by another rotary vacuum pick-and-place unit.

The packs index to the closing station. Pins from below push the lids up from a layflat position, and a roller assembly mounted over the clams comes from the cross direction to roll the lids shut. The hinge snaps shut and is secured via friction-fit corners.

The packs are conveyed on for a short distance before they discharge onto a 90° belt conveyor that carries them to labeling. Packs move past twin labelers from Auto-Labe (Ft. Pierce, FL) that each apply a pressure-sensitive label to every other pack. The 2-mil clear polypropylene printed in three colors with the words “Reclosable Storage Pak” by Wisconsin Label (Algoma, WI) wraps most of the way around the pack to provide tamper-evidence.

The packs are then hand-loaded into corrugated display cases pre-assembled with ridged plastic inserts that not only hold the packs upright for shipment, but also function as display units.

Although similar in effect, the AAA line is laid out in a straight-line versus the AA line’s “L” configuration. Like the AA line, it was designed by Rayovac and built by Southwest Machine.

With distribution expanding and demand growing, Rayovac planned to bolster production rates through the addition of second battery feeder systems for each line early this year.

Rayovac engineering manager Chuck Harmon and program manager Ken Kamp report that the new lines are in “excess” of 10% more efficient than their other packaging lines. That’s a positive for any new packaging line.