A move to an upgraded vision sensor for tube registration helps filling at Access Business Group stay out of the dark. Literally. 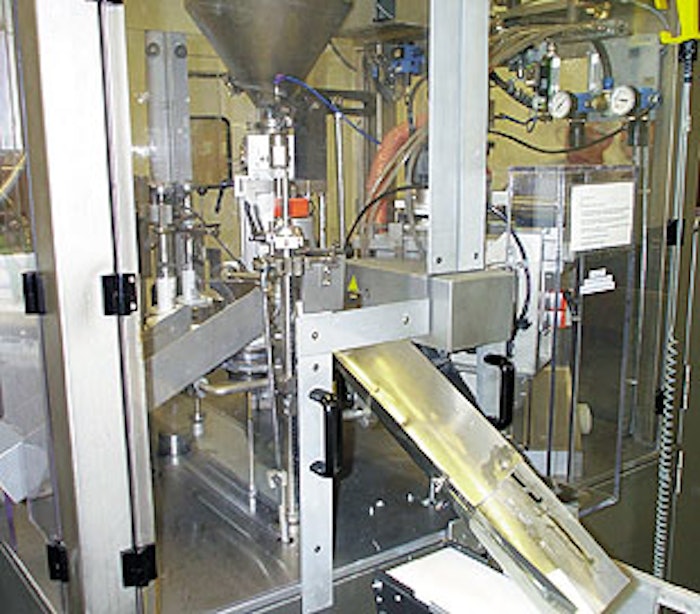 On board the 14-station rotary filler/sealer (above), the upgraded sensor reads the registration mark (left) to orient the tube

At the Ada, MI, headquarters operations of Access Business Group, Inc., formerly Amway, a photocell provided on a tube filler proved unreliable at reading registration marks, even when personnel darkened the room to enhance its reading capability. It was also affected by dust, which could partly obscure the photocell and lead to misreads, says Bob Farmer, senior cosmetics facility engineer.

With that unreliability directly contributing to a scrap rate of 1 to 3%, Access couldn’t turn a blind eye to the problem. The company found a solution in an F10-S30R vision sensor from Omron Electronics (Schaumburg, IL) installed in late ’99. The pattern-matching, continuous-scan vision sensor carries a list price of $1겨 and features an easy, one-button teach function. Using eight red LEDs as a light source, the grayscale 200x190 pixel camera can be set for auto, normal or wide-field views.

“The prior sensor was very troublesome because it was affected by tube characteristics, including reflections, even with the lights out and the room dimmed,” says Farmer. “The Omron vision sensor virtually eliminated that problem.” The use of the new sensor is part of a wider implementation of economical vision sensors at Access (see Packaging World, Dec. ’00, p. 33).

In operation at the plant since ’96, the German-made IWK (Fairfield, NJ) Model TFS-20 rotary tube filler indexes 14 tube-carrying pucks through eight active stations. This is typically done at a rate of 50 tubes/min, but it can go as fast as 65 tubes/min. Tubes range in volumes from 30 mL to 250 mL or more, and they’re supplied in a product-dependent variety of shapes and colors. The tubes are bottom-filled with pumpable personal-care products. The day of Packaging World’s visit, 75-mL tubes of Artistry® brand moisturizer (shown) were run. These opaque tubes are printed with a black registration mark.

In the machine’s second station, the puck-held tube is rotated in place until the sensor’s camera sees the mark, then signals a clutch mechanism to stop the rotation. The bracket-mounted sensor is located about 4’’ from the tube and is pointed upwards at a 15° angle to reduce glare. The sensor’s controller, separate from the machine’s PLC, is housed in a clear plastic enclosure mounted on the filler frame about two feet from the sensor.

Measuring ¼’’ x less than 1/8’’ wide, the mark is on the tube’s backside, typically printed in black. On dark tubes it may be a white or gray box. The mark on the tube’s backside must be seen and read correctly to properly orient the tube for filling. The tube is held in this same orientation in the puck as it indexes to subsequent fill and seal stations to ensure the seal is parallel with front-of-tube graphics. An off-center seal yields an unusable tube.

The F10 has no problem pinpointing the mark on hard-to-read translucent tubes, which had been Access’s biggest challenge, notes Farmer. “It’s very forgiving,” he adds, even though the position of the printed registration mark varies slightly from tube to tube.

“It works great,” adds setup mechanic Russ Leach. Personnel acknowledge that the F10 and its grayscale capability may be “overkill” for the application, but they give a high level of assurance in return. Access reports that its scrap rate on the machine is now down to 0.1% or less, at least a 90% reduction from the previous scrap rates.

Access is retrofitting F10 vision sensors on all five IWK tube fillers, including twin-tube units. Another plus is that personnel don’t have to turn out the lights anymore, either.