A specially developed film applied to reusable trays on a heat-shrink machine helps the Milwaukee County House of Correction provide inmates with a tamper-evident package that reduces wasted food and packaging materials. 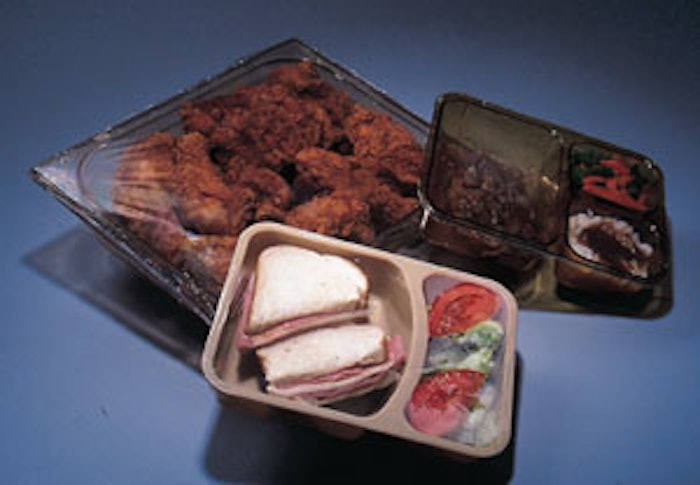 The Milwaukee County House of Correction produces meals in reusable trays like these in an unusual wrap and shrink process. The

Before the year 2000, the Milwaukee County House of Correction served inmates meals in reusable polycarbonate trays topped with heat-sealable lidding. Trouble was, after the lidded trays were heated in conventional ovens to warm the food, and the film was peeled away, bits of film clinging to the tray flanges were extremely difficult to clean off, even after multiple trips through dishwashing machinery.

Occasionally, some residual material remained on the tray lip. When that tray was used again for another meal, the residue created slight gaps where the subsequent film lidding could not seal to the tray. To inmates, it looked like the food in the tray had been tampered with, so they exercised their right to reject the meal. That caused wasted food, packaging materials and manpower. A change was in order.

The situation was addressed with the addition of a heat-shrink machine designed to work with reusable rigid trays in institutional packaging environments like correctional facilities, schools and nursing homes. The CF-LD-30 machine comes from Orics Industries (College Point, NY). It heat-shrinks a specially developed film, without a sealant layer or coating, onto the tray top and under its flange to create a tight, tamper-evident fit. Called Mylar® 50XMLD, the ½-mil monolayer polyester film was developed by DuPont Teijin Films (Wilmington, DE). Because the film has no sealant, it leaves no residual material on the polycarbonate tray. The film adheres to the tray after the Orics machine crimps it under the flanges and after the pack passes through a shrink tunnel. The transparent, amber-tinted reusable trays are supplied by Design Specialties (Wallingford, CT).

The MCHOC employs the heat-shrink machine at its Franklin, WI, central production kitchen. The kitchen prepares meals that are served at five facilities in southeast Wisconsin. At Franklin, the food is cooked, then manually portioned into trays, lidded and kept in a refrigerated vessel that cools the food, holding it between 28°F and 32°F. The use of this “cook-chill” process, says Karen Russell, “is growing in corrections [facilities].” She defines the process as “a method of food production, a pasteurization process where, depending on the acidity and sugar level of the product, refrigerated items can be kept anywhere from a week to 45 days.”

Russell served as foodservice manager for the Franklin facility when it went to the cook-chill process. She was one of the key MCHOC employees involved in selecting the tray sealer and film now used by the facility. Last fall, she left MCHOC. She is presently the senior foodservice manager for a contract foodservice company based in Phoenix. MCHOC representatives declined to comment on the equipment or material. Russell did.

“The seals were getting worse and worse, to the point where we’d put the trays in an oven and [the lidding film] would blow off,” she recalls. The trayed food may be reheated in a variety of convection ovens and in a microwave. However, in an application such as this, institutional ovens that accommodate large volumes are typically used. If the film blew off, “the food would dry out,” she says. “There was a lot of waste. And inmates believed their food may have been tampered with. Food is one of those ‘security issues’ in a correctional environment. You want inmates to be [satisfied] with what they’re getting.”

Russell worked with a kitchen designer and equipment contractors to update two older sealing machines used at the Franklin facility. By networking, MCHOC learned that the Dallas County Sheriff’s Department was using a four-lane Orics machine and the DuPont film to serve local correctional facilities in Texas. She says MCHOC representatives visited Dallas’ central kitchen facility and were convinced the machine/lidding film combination was the way to go.

“The sealer replaced the other sealing machines, which are now used as backups,” Russell says. “The kitchen uses a two-lane Orics machine. Each lane runs at 22 trays a minute,” though each lane can produce 30/min. “With inmate labor and staff, the institution wanted things to work just right, and it felt that 44 trays a minute [total] worked better for its operation.

“That’s much faster than the older machines, which were a start-stop, start-stop operation because the machinery wasn’t handled the way it was supposed to have been,” she continues. “The machines would go down, then would have to be restarted again. They required constant replacement parts, and maintenance people would have to get new chain links, rebuild motor and whatever else they had to do to [keep them running properly].”

At Franklin, tray compartments are manually filled with food. Trays are placed two at a time into a carrier that supports the trays as they move along the machine’s infeed conveyor. As the filled trays index into the intermittent-motion machine, they pass beneath the roll-fed film. A die descends onto the tray and a set of seal heads crimps the film beneath the flanges. The film is cut around the tray contours such that the film extends beneath the flange around the tray’s perimeter. That, along with a mechanical device, helps to hold the film in place before the trays move through a heat tunnel where the film shrinks tightly over the tray top and beneath the tray flange. The process allows a tight shrink even on packages where the food extends higher than the top of the tray. Meanwhile, the film automatically advances for the next two food-filled trays.

Russell explains that the system “worked just wonderfully.” The machines began operating in Franklin in February. While no cost-savings numbers were made available, it’s reasonable to expect that savings factored into MCHOC’s purchase of the machine. With fewer meals, trays and lidding film being discarded, those expenditures should go down. As would labor costs associated with filling the trays, cleaning them and maintaining the older, slower sealing equipment. Because there’s no film residue on the trays, they’re easier to clean than the former trays. The wear and tear caused by excessive cleaning required more frequent replacement of the former trays. Presumably, new trays would not need to be replaced as frequently.

More details are available on the Dallas installation that MCHOC representatives visited before implementing the Orics equipment in Franklin. A DuPont press release quotes the Dallas County Sheriff Department’s Food Services Division 1999 Annual Report: “We reduced our dishwashing time by approximately 60 percent when we switched to [Mylar LD] polyester film overwrap, allowing us to eliminate a shift of employees working in the dish room.

“We reduced salaries and overtime in that production area and realized a corresponding decrease in electricity, gas, water and sewer costs, plus an increased service life of the reusable trays by changing the way we sealed them,” the report continues. “We also realized an approximate 1 ¼-cent-per-meal decrease in staff and utilities cost for the nine million meals served since we switched to the new lidding film. With the previous lidding process, we suffered a 1/5

At the Franklin kitchen, the Orics machine’s 44 tray/min total output helps meet growing meal volumes. “The kitchen was running approximately 3꺜 meals per meal period,” remembers Russell. “And a lot of time it was two meals a day.” She says some meals are served cold, though they’re packaged the same as meals that require reheating.

The equipment yields “a better-quality product because the lidding film [no longer] comes off,” she summarizes. “The food retains the moisture it was intended to have. We don’t have adhesive buildup on the tray, which makes cleaning the trays a lot easier. We had inmates happy that their food was wrapped and nicely sealed, so there was no question about tampering.”