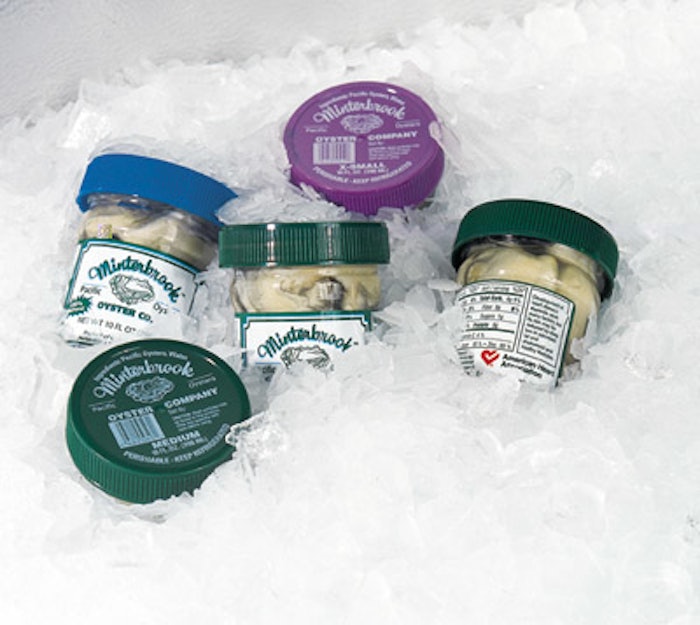 Since new labels and a large plastic cap were made part of the package, the container has much better impact on display. Inset s

The Minterbrook Oyster Co. of Gig Harbor, WA, has been bringing oysters to market since 1932. Relying on glass jars for most of that time, the firm switched to plastic in 1995, primarily to lighten their package and eliminate concerns with breakage.

Even more recent than its shift from glass to polyethylene terephthalate packages is Minterbrook’s November ’99 switch from a threaded steel closure and heat-shrink tamper-evident sleeve to a threaded polypropylene closure that incorporates a membrane that can be induction-sealed for tamper evidence. Innovative Molding (Sebastopol, CA) injection molds the PP cap. It’s applied by hand and then run through an induction sealing system from Enercon (Menomonee Falls, WI). The switch has provided the benefits of improved appearance, cost savings, better product quality, reduced labor costs, and freed-up floor space. Minterbrook general manager Erika Wiksten is especially pleased by the improvement in appearance.

“The jars are often displayed on ice, and the steel lids tended to rust,” says Wiksten.

Also enhancing the containers’ in-store presence is that the deep-skirted cap is considerably larger than its steel predecessor. “It makes for a much better display, especially when the jars sink up to the neck in the ice,” says Wiksten.

Yet another benefit gained since the switch to the new cap is in the area of product quality.

“There is no longer any need to add heat to the product as we had to do when the filled and capped containers went through the heat-shrink tunnel,” says marketing manager Emily Khan. Being able to process the product more quickly and keep it colder, she adds, means a better-tasting oyster reaches the consumer up through the end of the 20-day refrigerated shelf life.

Floor space is now freed up, too, since the bulky heat-shrink tunnel has been removed. “The induction sealing equipment is much more compact,” says Khan. “It’s mounted directly onto the conveyor that moves product from the capping station to the cooler, thereby saving floor space and improving workflow.”

Workers at Minterbrook are now more productively deployed, too.

“Switching to the induction-sealed closure has allowed us to reassign four full-time employees to more useful tasks,” says Kahn. “In the past, one employee was needed to remove the jars from the packaging conveyor to flats. Two employees placed the shrinkable sleeves onto the jars, and another employee hand-loaded these jars onto the heat tunnel conveyor. As the jars exited from the heat tunnel, they were repacked onto a flat and taken to the cooler. Now only one employee is needed to remove the sealed jars from the discharge of the Enercon machine, place them on a flat, and take them to the cooler. So a real bottleneck in the packaging process has been alleviated.”

Minterbrook uses 8-, 10- and 16-oz PET jars, which are injection/stretch blow molded by Premier Packaging (Seattle, WA). To the jars are applied 58-, 70- and 110-mm closures. The Enercon Compak™ Convertible induction sealing unit can efficiently seal this range of closures because the head can be positioned four different ways relative to the centerline of the conveyor. The positioning can be changed in seconds without tools.

Power levels are raised slightly for the larger containers. The specific power setting for each application will vary depending on conditions such as product temperature, ambient temperature, container size and throughput, the size of the closure, and so on. When the container passes under the induction sealer, the heat melts a wax layer, which releases the inner seal membrane from the cap. The heat also activates an adhesive on the induction seal that secures it onto the land of the jar’s neck finish.

“The wet environment and the slightly acidic nature of the oyster juice presented obstacles to the machine’s success,” says Kahn. “These obstacles were overcome through extensive testing and experimentation with different lids, liner materials and containers. We’re indebted to Enercon for the success of the final combination.”

Jar manufacturer Premier Plastics sends jars to Minterbrook already labeled. But Wiksten says she prefers not to identify the label spec or converter because developing an adhesive that would stick reliably despite the inevitable presence of some acidic oyster juice was no easy task. “We’ve had numerous competitors try to copy us,” says Wiksten. She does say the label is glue applied.

One last piece of new equipment located just downstream from the induction sealer is a Kortho Hot Quick Coder. It’s made in the Netherlands by Kortho, whose U.S. representative is Universal Stenciling & Marking Systems (St. Petersburg, FL). Similar to a contact roll coder, it has rubber-like type that picks up ink from a heated ink-roll to stamp lot and date code on the PP closure. According to Wiksten, the reciprocating coder’s ability to function in a wet environment is what sets it apart.

“We tried ink-jet coding but weren’t very successful,” says Wiksten. “This system uses a wax-like ink. It stamps right through the water and it’s perfect every time.”

Acceptance of the new package in the marketplace—where 8-oz jars sell for as low as $3.99 and 16-oz jars for as high as $6—is especially rewarding, says Wiksten.

“Within two months of our market introduction of the new package we had signed on more than 300 new outlets,” says Wiksten. “All in all this was quite a successful project for us. We achieved the cost savings that we were looking for, improved our production workflow, and built our customers’ confidence with a quality package to support our quality product.”