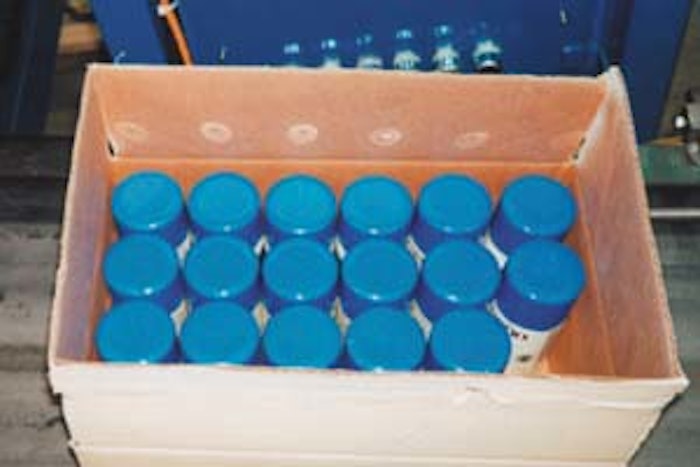 The laser scanners "look" through the top of a case of aerosol cans (above). Each of three scan heads has a 120-degree field of

PDM Technology, an automation systems integrator in Detroit, faced a vexing challenge. A major cleaning products maker sought a versatile test and inspection system for a versatile line that packed numerous products in aerosol cans. While the differences in containers and closures were a concern, a harsh environment was another obstacle. Finally, the new system needed to reduce the levels of programming and downtime.

The inspection system would replace a grayscale vision system located after the cans were loaded into an open shipping case. It needed to detect defects such as missing cans or skewed caps, inverted cans, closed flaps or raised cans in cases leading to a case sealer.

The previous system sometimes worked well. However, problems arose when products or caps changed in size or color, sometimes due to manufacturing variations. Because the system was prone to environment changes, like levels of ambient light, it would often malfunction. And this could lead to several hours of downtime to make programming changes.

PDM turned to Laser Measurement Intl. (Southfield, MI) because it had used its sensors in the past. After it learned about the application, LMI recommended the L1 Line Scanner, a three-dimensional non-contact device capable of producing 60 container profiles/sec. “Once we had tested this scanner, we knew that this was the best way to alleviate most of the problems of the former vision system,” says David Baker, president of PDM. “Our software package interfaces nicely with the LMI sensors. That can be a big challenge with some sensor makers.”

The key to the L1 is its insensitivity to changes in the environment or parts that often hindered the vision system. This increased accuracy combined with decreased downtime for reprogramming the instrument each time a change was made. The L1 system is not only easier but much faster to program. The operator simply selects a preprogrammed product class and calibrates the instrument by passing three correct boxes of cans under the sensor. The system calculates required parameters and begins actual defect testing of the fourth base.

Located just above the case conveyor, the sensor scans the cases. Rejected boxes are forced onto a diverter so they can be remedied and returned to the line. Meanwhile, the system reduces the chance of damage to the case sealer while it prevents incomplete cases being shipped and the attendant customer complaints.

The scanner is designed for high-density profiles in different configurations. Each scan head has a 120-degree field of vision for optimum measurement. The three heads used together offer a full three-dimensional image for measurement. In operation, a fixed beam of light is projected from the sensor to the surface to be measured. When the light hits the surface, it scatters in all directions. The sensor collects part of this scattered light and maps out the contour of the scanned image and generates a profile that is essentially matched against the profiles gathered in calibration.

The result, says Baker, is a system that detects 99% of defects, while slashing downtime caused by reprogramming.