Tums packages sealed with a twist 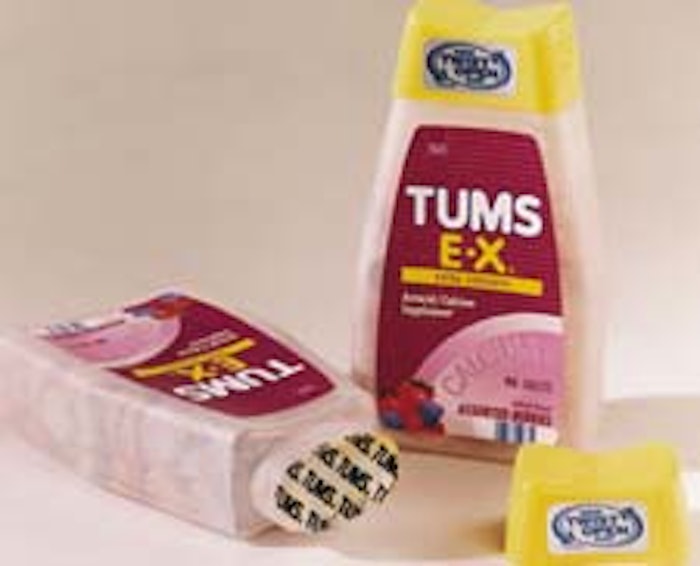 Relief is now just a twist away for Tums users. SmithKline Beecham Consumer Healthcare, the Pittsburgh-based manufacturer of Tums®, Tums E•X® and Tums Ultra® Antacid/Calcium supplements, recently completed a packaging makeover on its popular products. Previously topped by a snap-on cap that was removed by prying up on one side, the new, more consumer-friendly package employs a twist-off cap. It removes easily to reveal an oval-shaped foil membrane that is induction-sealed on a machine from Enercon Industries (Menomonee Falls, WI).

In early 1998, consumer feedback and keen observation led SB’s marketing department to the conclusion that a new package was in order. To help implement the changes, SB turned to long-time partner Pretium Packaging (Hermann, MO), which has supplied the pharmaceutical company with bottles and caps for almost 25 years.

The design team, consisting of SB, Pretium, and moldmakers Swan Industries (St. Louis, MO) and R.J. Abramo Associates (Hollison, MA), went to work on prototype packages with several goals in mind. First, they wanted a familiar shape for continued brand recognition, but with a new opening method for the cap. Another consideration in the design was the addition of an induction seal, as the conduction-sealing machines previously used were large, cumbersome and difficult to service.

“Basically, there were no change parts available for the machines,” says Jim Pitassi, packaging engineer with SB. “Everything had to be made in-house in the machine shop in St. Louis (where the Tums products are packaged). The conduction units took up a lot of space, and they were hard to service. The maintenance guys had to crawl around them to make necessary changes.”

In his quest for an induction-sealing supplier, Pitassi decided to add Enercon to the team developing the new Tums package. “I liked its strong, in-house research and development team, unlike R&D consultants that I found with some of the competition,” he explained. “Enercon also provided the commitment to work with us through and beyond completion of the project. Also, the induction sealer is a solid, compact unit.”

Working with the various prototypes, the design team finally established that it had a winner for bottle shape and material. The almost-finished design replaced the previous bottle material, polystyrene, with injection blow-molded polypropylene, resulting in a lighter bottle while maintaining the predecessor’s familiar silhouette. The injection-molded, high-density polyethylene cap was contoured to match the shape of the bottle, snapping on and twisting off. Once the basic cap and bottle design were decided upon, the design team needed to work on the sealing aspect of the package.

According to Enercon vice president Augie Ray, induction sealing involves “eddy currents” being induced into the foil seal via an electrical field that bottles pass through. “Those currents run in a circular pattern, making it easier to seal to a standard, round mouth opening,” Ray explains. Enercon does offer a unit with a modified sealing head that’s capable of sealing fully rectangular openings, but it can only seal one bottle at a time. SB couldn’t sacrifice Tums production speeds, so the two companies compromised. Enercon customized its Compak Induction Sealing System with a special sealing head that would generate an induction field that would seal the oval-shaped opening designed for the Tums bottle.

The Tums package is considered a breakthrough in that it is believed to be the first oval-shaped bottle finish to receive an induction seal with a snap-on cap.

The next hurdle was designing the snap-on feature of the cap, as it was crucial that the foil membrane liner contact the bottle evenly and firmly around its perimeter to produce a reliable seal every time. Most induction sealing involves screw caps, which offer the benefit of an even amount of pressure applied to the cap at all times. “With snap-on caps,” Pitassi explains, “you have to ensure that the cap areas that receive pressure from the capper get enough pressure to hold the entire liner onto the bottle.”

To address this issue, the design team developed many prototypes as they worked to perfect the inside of the cap and the liner positioning within the cap. Finally, they reached a design that sealed consistently. According to Mickey Miramonti, supervisor of mechanical services at the St. Louis plant, the final design employs four locking lugs on each cap that hold the liner on firmly enough to create a solid seal. “We were continually adjusting things like the mold designs, how deep the cuts were for the lugs, how much pressure to apply, and the liner and cap thickness until we arrived at a design that worked,” he says.

For its part, Pretium invested in two new cap lining machines that are currently dedicated to inserting the liner into the Tums caps. The oval liner is preprinted with the Tums logo. Pitassi calls the liner “a standard 3.3-mil foam/foil/PP liner.” Pretium also purchased an Enercon Compak— the same system used at the SB facility—to randomly test the Tums packages.

After a year and a half of packaging development, the new Tums bottles debuted on Sept. 1, 1999. Surprisingly, the St. Louis Tums plant required few adaptations in order to fill, cap and label the new bottles on three dedicated packaging lines. The smaller bottle size (48-tablet count) was wider and shorter, so a few adjustments were necessary to accommodate its shape. The primary change was in the filling stations, as the tablets would now be fed into an oval opening rather than a rectangular one. “We had to make adjustments to the filling manifolds to make them the same shape as the opening of the bottle,” Miramonti recalls.

The plant’s in-house machine shop fabricated all the new parts required to alter the equipment used for the new bottles. According to Miramonti, having in-house fabrication and mechanics saves on downtime because the company has someone that is familiar with the operation available at all times.

The efficiency of the line has increased dramatically since the closure change, according to Miramonti. “There is a lot less downtime, which saves on manpower. And we produce less scrap. The conduction sealers punched the seals on the line, leaving waste, and they didn’t always center the seal on the opening of the bottle, resulting in lost product. Dwell time for the conduction sealers was a rate-limiting factor on-line, so an additional conveyor belt was snaked to slow down the bottles for sealing.” Adds Miramonti, “With the Enercon equipment, we can fill at regular line speeds. We don’t lose filling speed, as with the other unit.”

Tums, Tums E•X and Tums Ultra are sold through drugstores, convenience stores, etc. nationwide. Pitassi says consumer feedback on the new design has been “very positive. Overall, we’re happy with the performance of the induction-sealing equipment and the many benefits it has brought to our operation.”