At Japan’s Daiwa Can, one aseptic PET line uses in-line mold/blow/fill. Right beside it, another line blows bottles and sterilizes them in a second operation just before filling. 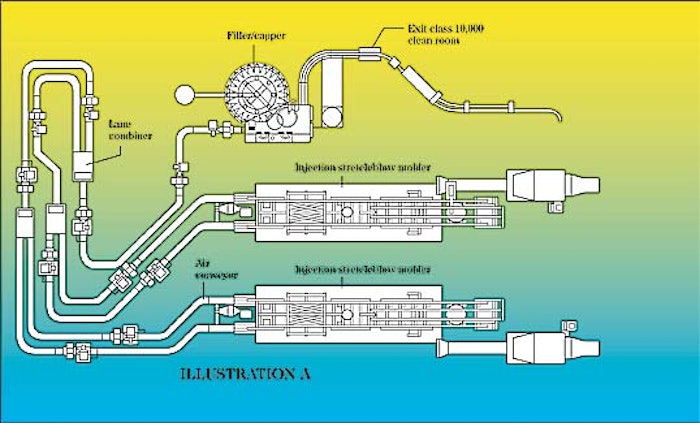 In the above drawing of Daiwa Can's ASIS line, two single-stage injection/stretch blow molding machines feed bottles through an

Once a beverage company decides to aseptically fill polyethylene terephthalate bottles, management still has an important process decision to make. Should it injection-mold and blow preforms inside a sterile area and then fill bottles immediately, also in a sterile environment? Or should it blow bottles outside a sterile area and sterilize them just before they reach the aseptic filling system?

Yes and yes were the answers for Daiwa Can Co. of Japan at its Ooigawa plant in central Japan. (Daiwa Can operates its new lines on behalf of contract packager Sanwa Canning, Ltd.) At the Ooigawa plant, the company installed two complete lines: ASIS (Aseptic Integrated System), an integrated mold/blow/fill line, and CC (Controlled Contamination), a two-step blow/sterilize/fill line. Both were supplied by Procomac of Italy, represented in the U.S. by Procomac North America (St. Petersburg, FL).

ASIS was the first of the two lines to be installed, and it’s been running since May ’99. CC followed in January of this year. Both lines routinely fill 500-mL bottles at about 600/min. Also significant, the products filled on both lines are not fruit juices, whose relatively high acidity levels can kill many forms of bacteria. Instead, Daiwa Can produces low-acid milk-based products with pH levels that make them a perfect environment for mold and yeast growth if sterilization of packaging materials isn’t sufficiently aggressive. Sterilization is, however, plenty aggressive at Daiwa Can, where the standard is a 6D log reduction in bacteria.

Shelf life on bottles produced on either line is six months at ambient temperatures. The beverages filled are popular alternatives to juices and carbonated soft drinks in Japan.

Versatility is a key

Why did Daiwa Can opt for what might be called “opposing” technologies rather than find the advantages in one and standardize on that? Because picking one technology would have minimized versatility. To understand why, it helps to explore the fundamental layout of each line, beginning with ASIS (Illustration A).

This line incorporates two ECS 48/80 single-stage injection/stretch blow molding systems from SIPA (Vittorio Veneto, Italy). Each SIPA has two linear banks of 20 blow molds each, and the banks are arranged parallel to each other so that discharge from each SIPA is two-up. That means freshly blown bottles emerge from the SIPA equipment four-across. A pneumatically controlled gating device combines the four rows into two, and then another combiner single-files the bottles and conveys them into the filler.

All conveying and combining are done via Procomac’s Convair C air conveyors. These are fully enclosed and overpressured stainless-steel tracks from which bottles are suspended by their neck rings and propelled along by HEPA-filtered sterile air. These transport systems maintain bottle sterility as the bottles move toward filling.

Both blow-molding cabinets, the Convair C air conveyors, the 100-valve Procomac Fillstar FX electronic flow-meter rotary filler and the 20-station rotary capper are enclosed in a Class 10ꯠ clean room that totals approximately 800 sq’. While ambient air might contain millions of particles per cu’, the air inside the clean room is filtered so that it has no more than 10ꯠ particles per cu’. Operators entering this clean room must pass through a sterile-air “shower” and don masks, gloves and shoe coverings to minimize contamination they could otherwise bring into the room.

Within this clean room, the two SIPA blow molders and the filler/capper block are each enclosed in sealed cabinets. Within these cabinets, Class 100 air is maintained. Operators access these machines through glove ports. These allow operators to clear a jam, for instance, without breaking asepsis, because even though their hands may be inside a Class 100 area, the glove-port material still separates them from contact with the equipment.

Unlike injection-molded preforms and stretch-blown bottles, caps are not produced inside a Class 100 enclosure. These are sterilized by a Sterilcap W3-Twin machine, also supplied by Procomac. Outside the class 10ꯠ clean room, caps are fed into the Sterilcap machine’s elevator. The elevator is sealed and air is filtered to a Class 10ꯠ level. When caps reach the top of the elevator, gravity takes them down a track through a spray of 65°C oxonia. Next is a hydrogen peroxide sterilizing zone, then a rinse of sterile water and finally drying with pressurized sterile air.

According to Procomac’s Gianluca Chierici, who oversees the Daiwa Can installation for Procomac, treating the caps with heated oxonia is a step Procomac added especially for low-acid products. For high-acid beverages, hydrogen peroxide is enough.

“This extra step is critical for low-acid products,” says Daiwa Can’s Tadao Shimura, general manager of its PET business. Without it, he adds, the 6D log reduction would not be possible.

Once sterilized, caps reach the part of the 20-station rotary capper that is inside the Class 100 filler/capper cabinet. Caps are torqued onto filled bottles, which then emerge from the clean room and move through sleeve labeling, case packing, etc. in a more conventional environment.

The key advantage of ASIS technology is the elimination of chemical sterilants. These would be required in a system where bottles are blown and then sterilized. ASIS bottles are sterilized in the blow mold and then kept sterile until they reach the aseptic filling system. This brings an immediate savings in costs of raw materials. It also eliminates elaborate sterilizing/rinsing systems from the line. And finally, it rules out any chance of off flavors in a bottle due to traces of sterilants that might remain as residuals.

So why install a CC line?

Such advantages are compelling indeed. So why did Daiwa Can also install, right beside its ASIS line, the “opposing” aseptic technology, where unsterile bottles are blown in one step and sterilized with chemicals in another? Because the firm needs to fill not just 500-mL bottles but also 350-mL. “Changeover is too slow on an ASIS line, where injection molding and blow molding are so tightly integrated,” says Shimura. “If you go from 350- to 500-mL on ASIS, you must change not only the filler but also the 160 cavities on the injection molding system and 80 cavities on the blow molder. Then you must resterilize both SIPA injection/stretch blow-molding cabinets and the filler/capper block.” Such a task would require at least four hours, even for a talented crew, Shimura told Packaging World during a recent visit to the Ooigawa plant.

Changeover on the CC line is an entirely different story, requiring about two hours. But first, a look at how the line is laid out (Illustration B).

The term “CC” or “Controlled Contamination” is used by Procomac because these bottles are always “controlled” by Daiwa Can. They’re blown in-house from preforms that are injection-molded in-house. Thus, they’re “controlled” far more than if the bottles were supplied by an outside merchant blow molder and thus were susceptible to any and all “uncontrolled contamination” before reaching the sterilizing equipment.

On the CC line at Daiwa Can, two 16-cavity rotary stretch blow molders from Krupp Corpoplast (Branchburg, NJ) are fed preforms by two injection molding systems. The two blow molders send a constant stream of bottles to an air conveyor system. The air conveyor delivers the bottles by their neck rings to the downstream sterilizing room. The air conveyor covers a path that stretches about 50 m (164’) in one direction and then 35 m (128’) back again. This becomes a sizeable accumulation buffer that allows the blow molders to keep turning out bottles even if a jam occurs on the downstream sterilizing or filling equipment.

The injection molding and bottle blowing systems, says Shimura, are capable of keeping pace with the 600-bpm filler. If one of the blow molders goes down, sensors detect this condition and signal the downstream equipment to automatically adjust its speed.

What makes this clean room significantly different than the ASIS line are three 96-head rotary rinsers. Rinsing and sterilizing are thorough, to say the least: two rinses with oxonia heated to 65°C followed by a sterile-water rinse. The 6D log reduction required by Daiwa made this kind of thoroughness essential.

After the final rinse, bottles are conveyed into a Class 100 cabinet that holds the same filler/capper block as the one on the ASIS line. Again, operators must access these machines through glove ports.

So how does the CC line lend itself to quicker changeover from one size to another? Because neither the blow molder nor the injection molding machine is in a sterile environment like the SIPA injection/stretch blow molders in the ASIS system. To go from 350-mL to 500-mL on the CC line takes two operators about two hours.

The strategy, then, at Daiwa Can is to dedicate the ASIS line to 500-mL squared-off bottles. The more versatile CC line, on the other hand, stands ready to fill either 350- or 500-mL bottles in either a round or square configuration.

Shimura acknowledges that it’s a bit unusual to have what might be called “competitive” technologies running side-by-side in a single plant. By utilizing both, he says, the firm maximizes the advantages of each while minimizing the shortcomings.

Next up for Daiwa Can? Two more ASIS lines in a plant located in Japan’s Gunma prefecture. The time-consuming nature of size changeover won’t be problematic there, says Shimura, because production requirements will allow the firm to dedicate one line to 350- and another to 500-mL bottles.

“Except for time spent on CIP and SIP,” says Shimura, “we’ll keep them running steadily.”