On a new Craisins line at Ocean Spray, point-to-point wiring between machine devices and their master PLC has been replaced on some machines by an open fieldbus called AS-i. Installation time is slashed, while in-plant flexibility is maximized. 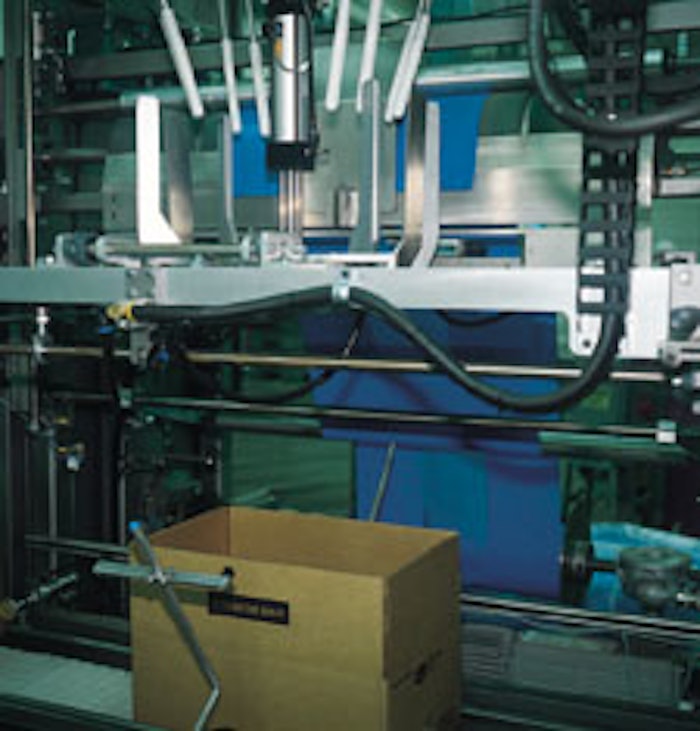 In this automated bag-inserting machine, nearly 60 devices communicate with their master PLC via a fieldbus instead of through t

The programmable logic controllers that operate so many packaging machines today are only as good as their ability to receive input signals and respond with outputs. Until recently these signals were typically carried on dedicated, point-to-point wiring. But now another alternative is available, and for the engineers at Ocean Spray Cranberry’s Tomah, WI, plant, it has meant shorter installation time and undreamed-of flexibility in adding or relocating I/O devices. Most important, it means PLCs from a wide variety of makers can be seamlessly integrated along the same communications line, or bus.

Called AS-Interface, or actuator-sensor-interface, this new communications network is most commonly called AS-i. Whatever name it goes by, it’s an open, vendor-neutral fieldbus supported by many established manufacturers. It connects photoeyes, proximity switches, push-buttons, valves, relays and any other sensing or actuating device on a packaging machine with that machine’s PLC. It replaces traditional point-to-point hard wiring between each of a machine’s slave devices and the master PLC they serve. And it does this, says the AS-i Trade Organization (Scottsdale, AZ), with no sacrifice in speed of data transmission. According to AS-i, in a configuration with 31 separate devices, the scan cycle time is 5 milliseconds. With 62 different devices, scan cycle time is 10 milliseconds.

At the Tomah plant of Middleton, MA-based Ocean Spray, AS-i is the device-to-PLC communications link on two of the five machines in a new packaging line. Commissioned last May, the line packs dried and sweetened cranberries, or Craisins®, into 10- and 25-lb boxes for food processors who use Craisins as an ingredient. The line consists of a case erector, bag-in-case inserter, combination scale/filler, bag uncuffer/flap-closer and case taper. Ocean Spray’s Dave Frenz, senior process engineer, was influential in bringing AS-i to the Tomah plant.

Also enthusiastic about specifying AS-i as the fieldbus in its individual machines was Pearson Packaging Systems (Spokane, WA). “When I told each machine vendor that I’d need an AS-i block in each of their machines to handle machine-to-machine communications, the Pearson people said they wanted their bag inserter and bag uncuffer to also rely on AS-i as the slave device-to-PLC communications link,” says Frenz. “They’re going in that direction anyway, and they saw this as a great application opportunity.”

The simplicity of the AS-i bus is among the things that impresses Frenz the most.

“Take a look at a packaging machine control panel with an AS-i bus line compared to one without,” says Frenz. “The AS-i version is so much cleaner. There are no big wire trains, just one two-wire cable that wraps around the whole machine.”

The two-wire cable Frenz refers to is what connects sensors and actuators with their master PLC. This electrical connection is made using contacts that pierce the cable’s insulation, thus contacting the two wires inside. This eliminates any need to strip the cable and wire it to screw terminals. That saves time during initial installation and when replacing worn components. As Frenz puts it, “You just clamp on anywhere along the cable that you want.”

Frenz views this nearly instant connectivity as a huge benefit.

“If you want a photoeye somewhere, or an air valve or some other actuator, you just clamp it right on. You don’t have any wires to run back to the PLC, so you don’t have to call the electrician.”

Also, says Frenz, the cable material is what he describes as “self-sealing.” “I can unclamp and move a device any time I want without having to somehow reseal the cable,” he says.

This “clamp-and-go” feature came in handy a few months after the line went into production. What Frenz and his colleagues noticed is that if a case jammed at the filler, the act of removing the jammed case often triggered a photoeye that signaled the next dump of product before the next case could reach its proper position beneath the filler.

“So I clamped onto the AS-i cable a two-button push-button device that the operator can use to disable the dump,” says Frenz. “When the jam is cleared and the incoming case is in place, the other push-button is pushed to signal the main PLC to signal the filler that it’s okay to dump.” It took just 25 minutes, says Frenz, to clamp the push-button device into place and perform the necessary ladder-logic programming. If hard wiring were in place, the same task might have taken anywhere from five hours to a couple of days, says Frenz.

One other feature of the AS-i technology that Frenz greatly appreciates is that it makes I/O devices self-diagnostic. A photoeye, for example, on the AS-i bus constantly reports four pieces of information to the line’s central PLC. First, is it blocked or clear? Second, is it positioned too high or too low, too close or too far to perform its function? Third, is the device itself experiencing an internal failure? And fourth, is there a power failure?

“Normally, you don’t know a photoeye is defective until you get a jam on your packaging line because the backup logic didn’t work due to the photoeye’s failure,” says Frenz. “But on this line, if an eye is defective, I get a message right away on the HMI panel. So I can go out and replace the eye before it has a chance to fail and cause a jam.”

“Because it is a truly open system, we can complete the wiring of our machines with an AS-i configuration before we even know what PLC the customer prefers,” says Parker. “Then, when the PLC is specified, we put in whatever brand the customer wants.”

Installation is simplified, too, says Parker.

“With push-buttons, brakes, indicator lights, photoeyes and so on, there might be 64 devices on the bag inserter alone,” says Parker. “If they have to be hard-wired to the PLC, installation might require five days. With AS-i, that installation time is more like one day.

“Other fieldbuses,” Parker continues, “like DeviceNet, for example, would be overkill in this kind of application. DeviceNet delivers I/O to and from variable-frequency drives, servo drives, motion controllers, and so on. It’s much more sophisticated than a binary system like AS-i. On/off, present/absent, blocked/clear—that’s all the information AS-i is designed to carry to the PLC. Now if you want to know the temperature of a proximity switch, or if you want to know how much dust has collected on a photo eye, that’s what DeviceNet is good for. In many instances, that level of information is overkill,” says Parker.

In addition to delivering I/O within single machines, AS-i also can act as a real-time bus, permitting the line’s central PLC, a Simatic 555 from Siemens (Alpharetta, GA), to perform machine-to-machine communications, or “interlocks,” as it’s sometimes called. Suppose, for instance, there’s a case jam at the filler and the upstream case erector must be “told” to pause. The jam at the filler is detected by a photoeye, which signals that information over the AS-i bus to the Siemens PLC. (The filler is controlled by this PLC.) The Siemens PLC then sends a signal, again over the AS-i cable, to the case erector’s PLC, thus triggering an actuator that causes the case erector to pause.

What’s significant here is that while the line’s central PLC is made by Siemens, the case erector has an Allen-Bradley PLC from Rockwell Automation (Milwaukee, WI). Also supplied by Rockwell are the PLCs in the Pearson bag inserter and bag uncuffer.

“With AS-i you can use a mix of PLCs if you want because it’s an open protocol,” says Frenz. “My main controller doing the ‘traffic copping ’ around the line is made by Siemens. But individual machines have Allen-Bradley PLCs.”

Frenz notes that one additional component must be included in a machine’s control panel if an Allen-Bradley PLC is to communicate along an AS-i fieldbus. Supplied by SST (Waterloo, Ontario, Canada), it’s a communications module that converts AS-i signals into I/O that an Allen-Bradley PLC can interpret correctly. The SST module is shown in the photo on page 66.

A similar module or gateway is required to permit the Siemens PLC to communicate along AS-i. The module in this case is supplied by Siemens.

Pleased with his AS-i experience on the Tomah Craisins line, Frenz now hopes to continue moving Ocean Spray away from proprietary I/O systems on a corporate-wide basis. In addition to the advantages outlined above, such a move could also save some big bucks.

“If you have a Siemens rack in a machine and you want to switch to an Allen-Bradley PLC, you have to replace all the Siemens I/O cards and wiring,” says Frenz. “That’s costly. If we can rely on I/O that’s vendor-independent, we can avoid those costs.”