Shrink sleeve bundling system enables Radius to unitize plastic cases of its unusual toothbrushes in film sleeves rather than the more costly folding cartons it had used. 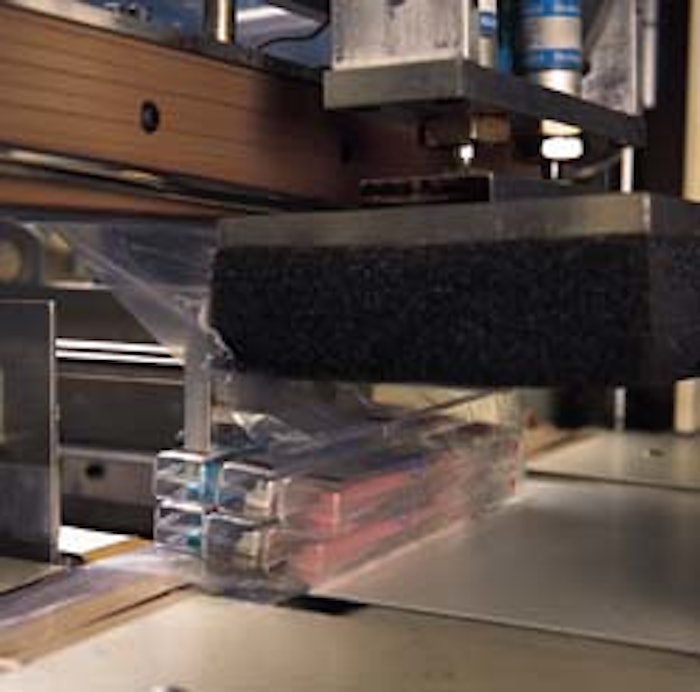 Six cased toothbrushes are bundled in a curtain of film formed from two separate webs.

The Smithsonian Institution recently added an unusual toothbrush to the permanent collection at its Cooper Hewitt National Design Museum in New York. The product is designed with a wide left- or right-handed rubber grip handle and large, soft bristles that brush both teeth and gums simultaneously. Although it’s the toothbrush design that caught the attention of the museum, the brush’s packaging merits more than a brush-off.

Radius Corp. makes and packages its toothbrushes for both adults and children. It also produces children’s brushes under the Fisher-Price® brand. Sold through much of the U.S., the individual brushes are manually packed into two-piece injection-molded cases made in-house by the Kutztown, PA-based firm. The cases are then decorated with either pressure-sensitive or shrink-sleeve labels.

After labeling, a Damark Packaging Systems’ (Lewisville, TX) film sleeve wrapper collates either two, three or six cases, overwraps them in film, then sends the unitized pack into a shrink tunnel.

Six-packs are shipped to nearly all of the retail stores that carry the company’s toothbrushes. Three-packs are made exclusively for Target stores nationwide. The two-pack is used for promotions.

Purchased about two years ago, the film bundle produced by the Damark system replaces the folding cartons Radius had used previously for its six-packs. “The cartons were beautifully printed, and they contained “slots” that held the individual brushes, but they were expensive,” recalls James O’Halloran. He and Kevin Foley co-founded the company in the early 1980s.

O’Halloran says, “The cartons were ideal for the health and nutrition stores we sell in, but they weren’t necessary in the general chain drug and grocery environment. They didn’t want them, and they threw them away.” That was especially vexing, O’Halloran says, considering “we were paying 35 cents for each carton. The shrink-sleeve bundling film costs us about one-third of a cent per [unit] pack.”

The co-owner estimates that two-thirds of its sales of one million brushes last year were six-packs. So that year’s savings from the switch to shrink-bundled film amounted to approximately $38ꯠ. This year O’Halloran forecasts sales of 1.3 million brushes.

Radius runs the shrink packaging line one or two shifts/day, depending on the season, at its 15ꯠ-sq’ Kutztown plant. The process begins as toothbrushes are made in a basement molding area. Finished brushes are placed in totes and kept in a storage area. When that specific model is needed, the tote is brought to one of several stations positioned along a conveyor in a packing area.

A worker is positioned at each of these stations. At the first station, a person opens the plastic cases from a tote and places them on the conveyor. Operators at stations downstream load a different-colored brush into each case, then apply the cover.

Cases are subsequently labeled on one of two machines, depending on the toothbrush brand. Once the label is applied, the case continues on a discharge conveyor. An eject system transfers the case up a ramp about 3” to another conveyor leading to the Damark equipment. The bundling process uses two rolls of shrink bundling film made by Delta Plastics (Newark, NY). The 2-mil Deltuff 602SB film incorporates a blend of linear low-density polyethylene and LDPE resin.

Initially, film unwinds from both rolls to the machine’s seal area where a heat-sealing head joins the two films. Toothbrush cases are conveyed in the machine direction to an infeed conveyor section on the Damark B24-90 sleeve wrapper. For the Radius application, the machine is equipped with an important collating system.

The machine collates three brushes before an air-injection, spring-loaded clamping system grasps them and lifts them up from the conveyor. As this occurs, another three are collated on a lower lift platform and lifted up to the previous three. A computer-controlled program instructs the pneumatic system to then bring the six back down into position where a pneumatic plunger pushes the six cases into the curtain of film, with film covering the top, bottom and both case ends.

The clamp holds the cases in place during this process, then retracts as the sealing head comes down behind the product group to heat-seal the film. The Damark system cuts and reseals the two webs of film into a new curtain. Damark credits Festo (Hauppauge, NY) for providing the wrapper’s pneumatic systems, and Rockwell Automation (Milwaukee, WI) for its Allen-Bradley SLC 500 control.

The bundled pack of six cases is conveyed immediately into the Damark S-24 heat tunnel where hot air shrinks the film tightly. The bundles travel on plastic belts that withstand high tunnel temperatures and prevent the small cases from falling through, as could happen with a roller conveyor. The tunnel is also equipped with a 2’ “cool-down” section positioned near its end. In this area, room temperature air is blown at the film. This helps to “set” the film so that it’s more durable when it discharges from the tunnel. Without cooling, the film can still be soft and prone to damage. Once cooled, it’s less likely to tear when operators pack the shrink-wrapped packs into a shipping case.

The multipacks of cased brushes are then manually packed, eight per 48-count “master” corrugated shipping case, then hand-palletized and stretch-wrapped. Pallet loads are stored in a warehouse area before they’re shipped via common carrier or United Parcel Service to customer warehouses nationwide.

Brushes may be sold from a Radius floor display stand or from the J-hook molded into the top of each case. O’Halloran says the company sells brushes nationwide to drug, grocery and health food stores. Presently, he says Target is the only mass merchandiser to carry the brushes. Suggested retail prices are $6.95 for the Radius adult brush, $3.95 for the Radius Kidz version and $2.95 for the Fisher-Price children’s brushes.

Certainly those benefits have been recognized, and not only by consumers. After all, the brush design was so innovative that even the Smithsonian Institution took notice.