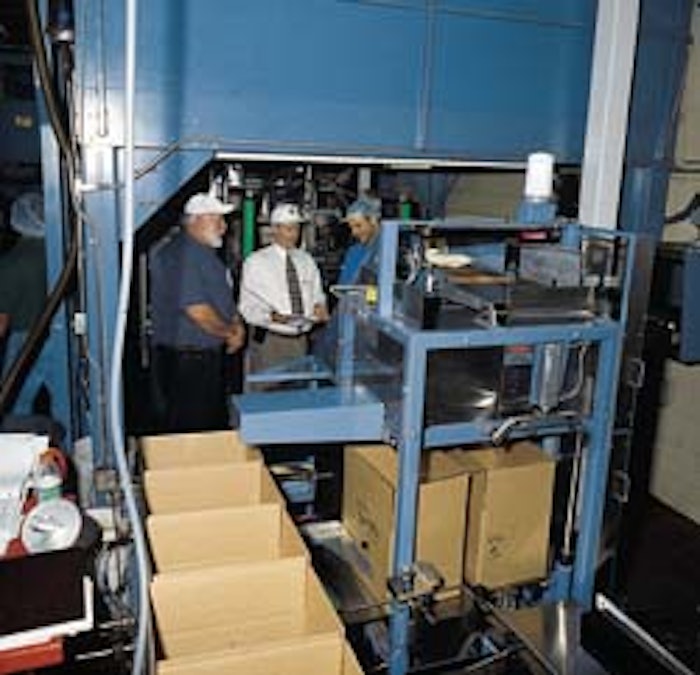 With OR-OSHA and Boyd personnel looking on, erected cases march toward the compact case packer (above). Meanwhile, bags convey f

It isn’t surprising that Boyd Coffee Co., Portland, OR, took on a project to answer repetitive motion concerns. That’s an ongoing concern at most companies, one that’s likely to accelerate given the new, tougher regulations proposed by the Occupational Safety & Health Administration (OSHA), which include material handling functions (see Packaging World, July, ’00 page 53 or packworld.com/go/ergonomics).

What is unusual is that the company’s new case packer, custom-built by Sims Mfg. Machinery div. of Michelson Packaging (Yakima, WA), was developed with a grant from the Salem, OR-based Oregon OSHA (OR-OSHA) agency (see sidebar on page 32). PW believes this ergonomics-related funding is one of the first grants of its type in the U.S., made rarer by the fact it was used for a packaging machinery installation. And notable as a first-of-its-kind custom machine that replaces manual case packing. That had been done by one operator filling pre-erected cases with product before semi-automatic sealing.

The Sims CP-100 case packer started up in March ’99. It loads erected, bottom-sealed corrugated cases. The main case dimensions the caser handles are a 13’’x16’’ footprint in heights of 8’’ or 16’’. It can also accept corrugated trays and much smaller boxes with flexible packs, says Jerry Vawter, coffee production manager. The bags of coffee are discharged from a vertical form/fill/seal machine directly to the case packer infeed conveyor. Almost all for foodservice, the packs in sizes from 6 oz to 6 lb encompass a range of Boyd brands such as Barista® and Italia D’Oro® espresso. The case packer accommodates pack configurations ranging from up to 96 bags packed bulk in a shipping case to pattern-packed cases containing as many as six layers of six bags.

In addition to the case packer development, the $137ꯠ of grant money Boyd received from OR-OSHA covered consultant fees and other costs associated with the project. These included integrating the case packer with existing equipment on one line. For example, it included a light curtain installed on the vf/f/s machine that allowed Boyd to remove guarding and safely link the two systems.

Companies that receive grants must also match 10% of the grant, which in Boyd’s case amounted to $13꺜. That investment was not a bad deal at all, enthusiastically acknowledges Vawter. The project, which involved ergonomic training and awareness and team formation, was spearheaded by Vawter.

To eliminate nagging or chronic aches and pains of workers, the case packer has replaced virtually all hand manipulation of packages, and cases at the pack station, says Vawter. “There have been no workers comp claims for this part of the operation since we started up the case packer,” he reports.

Perking up the operations

Bags discharge from the vf/f/s machine up a 6’-long inclined conveyor that’s part of the case packer installation. Run by a programmable logic controller with touchscreen operator interface, the case packer’s mechanical and pneumatic components pack the bags according to predetermined settings, in bulk or patterned layers. It is adjustable between bulk pack counts of 24, 48 and 96 of small sizes and 24 and 28 of mid-size bags. Mid-size or larger bags can be loaded in layered configurations of two-, four- or six-high.

Bag counts are done via photo sensors. For bulk packs, when the proper count is reached, a trap door mechanism closes, preventing additional packs from dropping into the case. The filled case is discharged onto a conveyor, and until an empty case is automatically positioned, the trap door is kept closed as the bags accumulate. Once the case is positioned, the door opens and the packing continues until the proper count is reached.

For layered cases, bags are turned 90º on the infeed by a pusher and assembled into a row. This row is cross-pushed onto the closed trap door, which then opens.

It was mandatory that there be no changes to Boyd’s case design, Vawter emphasizes, as the cases have been designed to maximize the cube in distribution. “Not by even an inch,” he states. “But, the system could run custom boxes, including sizes considerably larger than these. We want to keep the door open to running product and cases for private-label offerings.”

Cases are provided via an existing case erector/bottom taping system, also from Sims, located on a mezzanine level. Bottom-sealed cases drop 6’ from the mezzanine level down a chute onto a gravity flow conveyor. It leads to an L-bar pneumatic pusher that moves the cases 90º to the loading position. That is atop a platform section that vibrates to settle bulk-packed bags. A trap door operation above, run by the PLC, opens to discharge bags into the case, a drop of less than two feet. The system has no-box/no-load logic.

Cases convey through a top tape sealer and a print-and-apply corner-wrap labeler, both part of the previous line setup. Vawter points out that space between the case packer and the sealer allows the operator “to interact in the event of a jam or other problem as well as to inspect the case contents before case sealing.”

The project was set in motion when Boyd realized that its method of manual case erection, hand-packing and related duties for this part of its operations was not ergonomically acceptable.

Vawter explains that they were led to develop a custom machine since off-the-shelf equipment with the flexibility to do what Boyd required would not fit into the space available. “We had a space 11 feet long and less than six feet wide available,” states Vawter. Thus, Boyd had to seek a custom solution in upgrading from a manual packing operation.

When he first learned of the grant program, Vawter’s reaction was that “I didn’t want government meddling in my stuff.” Later, though, he heard more positives, and Vawter drafted an application that was approved by OR-OSHA in February ’98.

For machinery R&D, Boyd selected a company it had worked closely with before, Sims Mfg. The goal was to develop an automatic case packer that had to meet three primary objectives:

1) Pack the full range of coffee products without risk of repetitive motion injury;

3) be adaptable to interface with two types of vf/f/s machines.

Vawter explains that Boyd wanted flexibility in case they were to replace the current bagger, or if they wanted to install a second machine on another line someday.

The focus was to eliminate repetitive motion activities, “which this case packer does totally,” Vawter notes.

But what of other improvements? Product infeed rate to the packer of 50 bags/min remains exactly the same as before: “We didn’t change that by even one bag,” emphasizes Vawter. He notes that the case packer can handle up to 70 bags/min on bulk settings.

Staffing also remains constant, requiring a single operator. That was one of the stipulations of the grant: that there be no staff reductions.

So where’s the return on investment?

“The amount of downtime resulting from the operator’s inability to keep up has been elimin-ated,” notes Vawter. As a direct result of improving the throughput rate, he reports that productivity is up 8 to 11%.

“Now, the operator can quickly adjust the bagger, the case packer, the label applicator and the case sealer,” Vawter explains. “Rather than just case packing product, the operator has more time for solving problems and other higher value-added activities.”

One of those is an aspect most improved by the automated case packer: Conducting more frequent net-weight checks on bags. Says Vawter, “There’s a much tighter standard for net weights that has considerably reduced giveaway. That’s meant a substantial amount of savings.” He calculates that they save 50 lb of coffee daily, 250 lb/wk.

In fact, Vawter reports that count accuracy is so consistent and reliable that an in-line checkweigher developed for this area was moved to another line.

“Mechanically and functionally, the case packer is an excellent piece of equipment,” enthuses Vawter. “It is versatile, user-friendly and exceptionally accurate. It changes quickly from one pack function to another. Training was straightforward, and the machine is easy to master.”

Boyd’s would also consider adding a second case packing system at some point.

“I think this whole grant program has been very positive,” concludes Vawter. “It’s an excellent initiative, and any state would be well advised to emulate this program. There are a lot of people with good intentions and integrity that don’t necessarily have the answers or the money that could be provided with this kind of help.”

Grant program information can be obtained from Oregon OSHA (www.orosha.org) via the phone number or the Web site below.