A new skin-pack machine provides an Amish manufacturer of brass curios with a smaller, cleaner-looking package that occupies less space on gift-shop shelves. 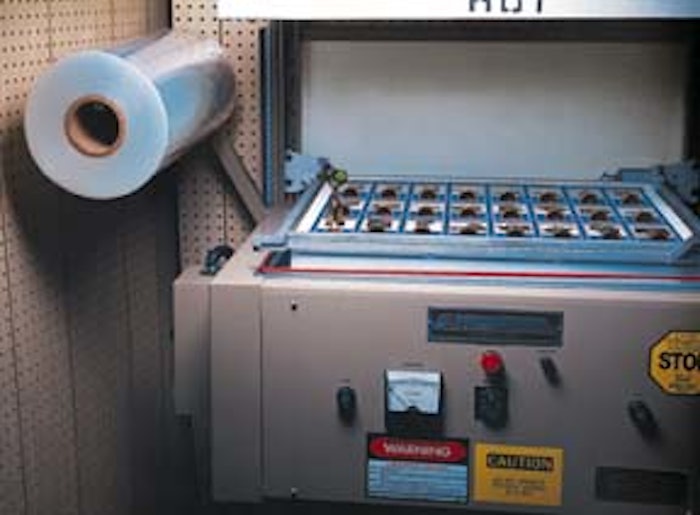 Brass bells are loaded 24-up on the skin-pack machine (above). The new, smaller skin pack (inset, right) frees up more shelf spa

It’s not often that words like “skin-pack machine,” “packaging redesign” and “10-mil PVC” easily roll off an Amish man’s tongue. But Eli Lengacher is not a typical Amish man.

Since 1982, Lengacher and his family of 10 have been manufacturing and packaging brass curios such as bells, thimbles and spoons on the grounds of an Amish community near Fort Wayne, IN, under the name of Amish Kraft Co.

Originally, Amish Kraft’s packaging was fairly rudimentary. The brass was wrapped in tissue paper and placed in a white paperboard box. A year-and-a-half ago, packaging evolved into a manually assembled two-fold SBS paperboard card with a polyvinyl chloride blister encapsulating the brass item. However, the 5”x7” package proved to be too large for some of Amish Kraft’s retailers, including NASA’s Houston, TX, gift shop.

Lengacher was sold on the idea. “Zed seemed to be our kind of people,” he says. But because Amish custom prohibits the use of electricity, clearing the machine with the proper authorities was, as Lengacher puts it, “a touchy situation.” A power source other than electricity had to be utilized.

“The machine runs on a diesel engine. There were certain applications, like the film heater, where it couldn’t run any other way,” he says. “But we keep it pretty conservative. Only those items that we can’t otherwise power would be run [by the engine].”

The new package is about half the width of the previous version and has a much simpler design. Rohrer offset-prints the SBS cards in four colors and die-cuts the card in the shape of the brass item. Rohrer also manufactures the 10-mil PVC blister that encapsulates the back of some of the brass products. The new card is noticeably free of the large amount of text and graphics on the previous card, allowing the brass item itself to command the consumers’ attention. Clinging tightly to the brass item and the card, the film lets the consumer feel the contours of the product.

Lengacher’s family works in the 10ꯠ sq’ of factory space that occupies two floors. On the first floor, the family manufactures, buffs and polishes each piece, then inscribes them with the Amish Kraft logo. The pieces are then cleaned and sprayed with a protective lacquer. Next, a family member takes the brass items upstairs to be pad-printed in six colors. Once printed, the brass is ready to be skin-packed.

Zed provides the 5-mil DuPont (Wilmington, DE) Surlyn® film to Amish Kraft in roll form. The roll mounts on the left side of the EZ-Skin skin-pack machine. An operator pulls the film to the opposite end of the bench-top machine and locks it into place with a clamp frame (similar to a picture frame). The operator then presses two hand-start buttons, and the clamp frame automatically moves up to a position just below the heater.

For unstable round items like the bells and thimbles, the operator places wood boards die-cut in the shape of the item on the bed of the machine to keep the items steady. The operator then places the sheet of die-cut, printed paperboard directly onto the machine. Next, the operator places the PVC blister into the paperboard’s die-cut holes and loads the brass items into the blister. Bells are loaded 24-up, spoons 42-up, magnets 84-up and thimbles 98-up.

By pressing the two start buttons again, the operator starts up the heat coils. In about 15 to 20 sec, the coils reach 850?F, and the slightly melted film positioned just below the heater is ready. The film in the clamp frame then moves down to the bed of the machine, and the vacuum motor draws the film tightly around the brass and the paperboard. The paperboard is coated with a heat-sensitive adhesive. Upon contact with the hot film, the film bonds to the card.

The heater turns off at this point, but the vacuum motor stays on for a short period of time to help cool the film. The operator then unlocks the clamp frame, slides the completed sheet of packages to the right and cuts the film off on the left side of the paperboard sheet with a knife. By locking the clamp frame around the remaining film, the machine is ready to start a new cycle. Depending on product, Amish Kraft can complete one cycle every 8 to 10 min, including loading and unloading the machine.

After the sheet is taken off the machine, an operator cuts it into individual packages with a paper cutter. An operator then uses a manual hole puncher to punch out a delta-shaped hole at the top of the package. Then the packages are placed in a low-density polyethylene bag according to order, usually about 24/bag, and packed in corrugated shippers to be sent to customers via UPS.

Amish Kraft has experienced success with its products. NASA, the Alamo and small gift shops across the country carry Amish Kraft’s brass bells, thimbles, spoons, coasters and key chains, among other brass items. The collectibles’ retail prices range from $3.95 to $14.95. Retailers are happy with the new smaller package, and Lengacher has started auctioning off Amish Kraft items on the eBay Web site.

After using the EZ-Skin machine for only a few months, Lengacher says production is 50% faster. In addition, he says he’s saving about 8% on paperboard due to the smaller package. And as far as further automating the Amish Kraft packaging line, Lengacher has no definite plans. “But we’re full of ideas,” he says with a laugh. “We like challenges.”