An easy-to-open vacuum lid means no tools are needed to open this three-piece steel can. Once the can is opened, no rough edges threaten the fingers.

Pat Reynolds
On the food-contact side, the can end has a white plastisol compound applied to the entire perimeter and a small plastisol dot

Uniquely Brazilian, Mo°a Fiesta is a flavored condensed milk product from Nestl/ Brazil that is used to make a variety of children's birthday treats. For years, Nestl/ packaged it in three-piece steel cans that consumers opened with a can opener or can punch. The thick, viscous product is then spooned between cake layers or rolled into balls and covered with chocolate or other sweets.

In March, the conventional three-piece can used for Mo°a Fiesta was replaced by one that features an easy-to-open vacuum lid developed and patented by Metalgrafica Rojek (S-o Paulo, Brazil). This innovative can/end combination (Rojek also makes the Nestl/ can) requires no tools for opening. A small perforation in the center of the lid is sealed with a plastisol compound. Once the compound is peeled away, the vacuum inside the can is released, and the end can be lifted off effortlessly.

Tamper evidence is assured because the only way to gain access to the can's contents is by prying off the lid or by trying to penetrate the plastisol compound. Either action will release the internal vacuum. Without this internal pressure, nothing holds the lid in place.

According to Nestl/ corporate communications officer Carlos Ximenes, in addition to being easy to open without tools, the can is appealing from a safety standpoint. Unlike conventional ring-pull panel easy-open ends, this end has no sharp edges.

The can top is equally smooth. The can is made by Rojek on a conventional soldering system. A Can-O-Mat machine from Krupp Kunststofftechnik (Dsseldorf, Germany) molds into the can 15 beads or indentations that run horizontally around the entire body. According to Rojek, these add to sidewall strength. They also give the can an appealing feel and attractive appearance.

The other important task performed in the Can-O-Mat machine is that the neck diameter of the can is reduced from 74 to 67 mm in a spin-necking operation. In the same pass, the can top is rolled to eliminate the sharp edge.

The vacuum-seal lids are also made on Krupp Kunststofftechnik equipment: the End-O-Mat multi-die stamping press. This system produces the lid's center indentation and perforation in a single stroke. The shoulder of the lid is also curled in the same operation.

Nestl/ was not the first to use Rojek's abre facil ("easy-open") vacuum lid. But through next April, Nestl/ has exclusive rights to the concept for condensed milks.

Nestl/ isn't the only admirer of the technology. The easy-to-open vacuum lid won one of the two innovation prizes awarded at the recent Metpack '99 trade fair, held last May in Essen, Germany.

Actually, the end has been in commercial use since 1988, when Rojek was first issued its patents on the lid and the vacuum closing machine that applies it. But early applications of the technology were with glass jars, not cans.

In 1994, Rojek modified its technology so that the steel end could be vacuum-sealed to a steel can. Early applications were successful to a point, but the cans did not stack. Necking in the top to nest inside the base of the can above makes the cans more attractive to retailers.

Krupp's Can-O-Mat machine spin-necks the can top from 74 mm to 67 mm to make it stackable. Nestl/ is among the first to take advantage of this new benefit.

Because the can end is so unusual, it's worth examining how Rojek makes it. Step one is performed on a Krupp press that runs at 2군 ends/min. Ends emerge from the press and are split evenly to feed three lining systems supplied by Preferred Machining (Englewood, CO).

Each lining system consists of a dual-turret station followed by a single-turret station. Three different plastisol compounds have to be applied to each can end.

Next, the end is flipped over and sent through the single-station turret for application of another plastisol compound over the hole, this time on the opposite side. Following oven curing, which bonds the two plastisols together where they contact each other over the hole, the end is complete.

According to Alan Ross of Preferred Machining, each plastisol compound has to be carefully formulated with specific properties in mind. The one applied to the end perimeter must ensure a reliable vacuum seal. The one covering the hole on the outside must adhere reliably yet still be peelable when the consumer needs to break the internal vacuum and open the can. As for the plastisol over the hole on the food-contact side of the end, it has to bond to the plastisol on the opposite side of the hole so that when the consumer peels the outside plastisol off, the inside compound will come away to release the internal vacuum.

Nestl/ hot-fills the cans at about 80°C (176°F). Lidding is done on a Rojek machine that injects steam into the head space just before the lid is applied. The steam quickly evaporates, and as it does, an internal vacuum develops. This pulls the lid down tight to the can, and the plastisol lining around the circumference helps bond the lid to the can.

With all the extra handling the end requires, naturally it comes at a premium. Ximenes estimates it costs Nestl/ about 50% more than a conventional end. It's important to note, however, that both cans and ends were formerly self-made by Nestl/. "If we buy them from outside, naturally they cost more," says Ximenes. In the store, he adds, Mo°a Fiesta is sold singly for two Brazilian real (U.S.$1.06).

Nestl/ is promoting the convenience of the package in copy that appears on the can. Loosely translated, the message reads: "The only package that opens easily, and now in a new appearance." Television and print ads also tout the safety and the opening convenience of the can.

For now, however, Nestl/ has no firm plans to extend its use of this can into other product categories. "The idea is to see how the Mo°a Fiesta performs in the marketplace and then move forward from there," says Ximenes. 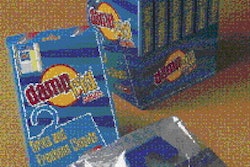 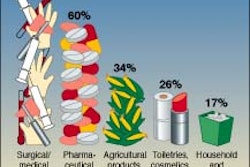 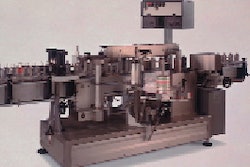